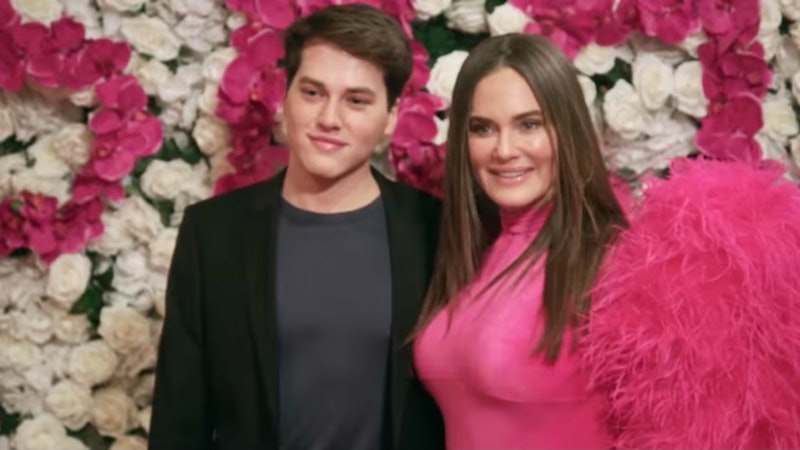 Between his quippy one-liners and enviable personal style, Meredith Marks' son Brooks has quickly become a fan favorite on the Real Housewives of Salt Lake City. And his mom doesn't mind sharing the spotlight with him. "Brooks is, in my eyes, beyond iconic," she said of the 21-year-old during a recent appearance on Watch What Happens Live with Andy Cohen. "He is incredible. He is my pillar of support in so many ways. And he's feeling great. He's really positive about everything. I'm so excited for him, I think this is going to be incredible."

As Meredith explained in the episode, Brooks was living at home with her while taking a semester off from college. According to his LinkedIn account, he's currently a student at New York University's Gallatin School of Individualized Study and is expected to graduate in 2021. Prior to enrolling at NYU, he graduated from the Latin School of Chicago in 2017. (The private school's alumni include former first lady Nancy Reagan and actors Bob Balaban and Ike Barinholtz .)

Brooks, brother to siblings Reid and Chloe, is also a budding fashion designer, and viewers have actually seen at least one of his creations already: his mom's costar, Jen Shah, tweeted that she loves him and even wore a jumpsuit he created during the RHOSLC premiere.

In a late 2019 LinkedIn post, Brooks' father, Seth Marks, celebrated the "young scrappy boujee" designer's "first collection of swag-wear," which he noted his son created "while juggling final exams at an educational institution he earned his way into." Seth also joked that Brooks "optimizes a budget" better than him.

Apparently Brooks' talents extend far beyond constructing elaborate birthday floral arrangements, and fans can expect to see much more of him this season on RHOSLC.