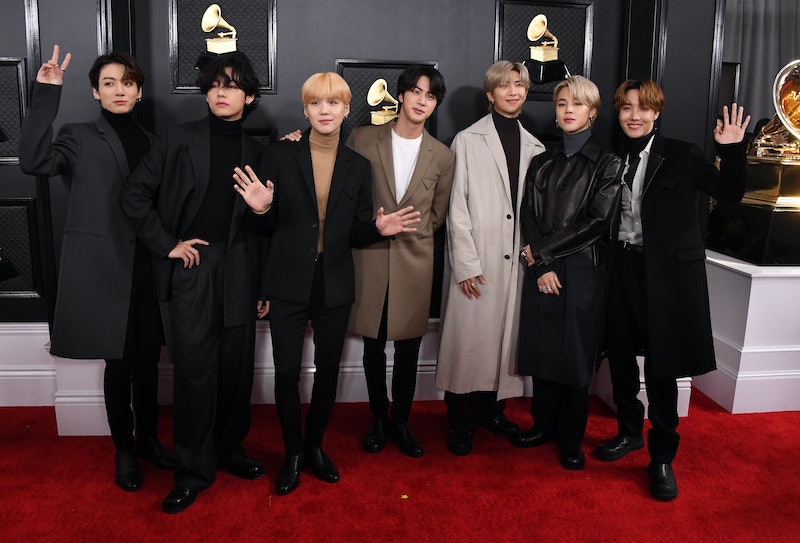 After losing the Best Duo/Group Performance category to Lady Gaga and Ariana Grande’s “Rain on Me,” BTS delivered a buzzy performance at the 2021 Grammys on Sunday night. Though they won’t be walking away with a trophy, all seven of the group’s members — Jungkook, J-Hope, V, RM, Jin, Suga, and Jimin — made history as the first K-pop group to be nominated for a Grammy. Their high-energy performance began with their nominated song, “Dynamite,” which is also their first entirely English track. Paying homage to their Korean culture, BTS reportedly performed atop the Parc1 Tower in Yeouido, Seoul. At one point, they also performed on a re-creation of the Grammys red carpet.

Prior to their show-stopping performance, the group virtually appeared on the 2021 Grammys red carpet in tailored looks by Louis Vuitton. BTS also shared what it was like to make history as the first K-pop group nominated for music’s top award. "It means that musicians around the world, and especially institutions like the Recording Academy, has a high regard for our music, so that really makes us happy and proud," the group said, with the help of a translator, to E!’s Giuliana Rancic. "And the fact that people around the world really love our music and this is a chance for us to show the world about Korean culture and ourselves and our music. So we're really happy and we're really proud."

Below, some of the most excited reactions to BTS’s rooftop performance.

The group’s first taste of Grammys glory arrived in 2019, when they presented an award. In 2020, BTS performed alongside Lil Nas X, Billy Ray Cyrus, Diplo, and Mason Ramsay. Considering their trajectory in recent years, it stands to reason that BTS could enjoy their first Grammy win in 2022.