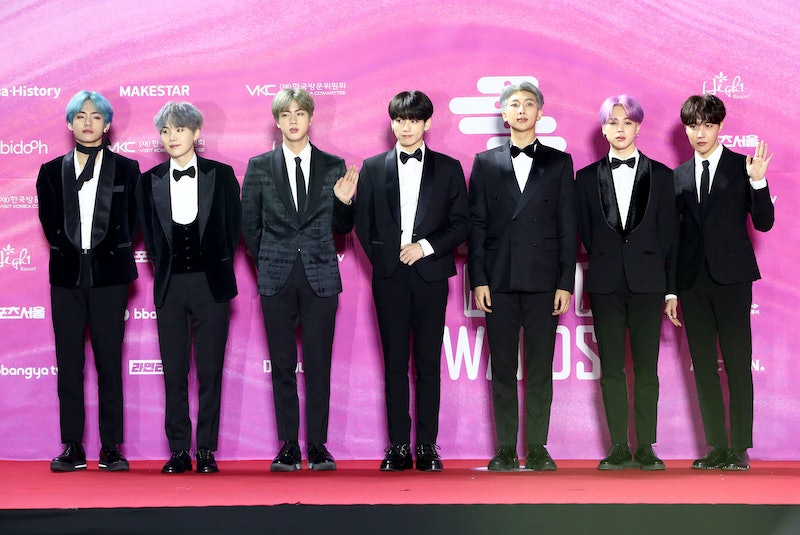 The wildly popular Korean band BTS made their first appearance at the Grammys and fans can't get enough. Tweets about BTS at the 2019 Grammys show the band's loyal fans are beaming with pride. Earlier this week, Billboard reported that BTS would be presenting at the Grammys, marking the band's first time at the biggest night in music.

Suga, J-Hope, RM, Jin, Jimin, V and Jungkook made their Grammys debut on the red carpet as shown on E!'s pre-show coverage and the band was interviewed by none other than Ryan Seacrest. The band chatted with Seacrest about how they've been touring around the world, working on their new album, how it's a legit dream come true for them to be at the Grammys this year, and how much they appreciated their massive fan base. It was a huge moment for the band and they seemed so excited about it all.

Not only was it the band's Grammys debut, but BTS is also nominated for an award — their album Love Yourself: Tear was nominated in the Best Recording Package category. The band did not win the gramophone — the Grammy went to St. Vincent's Masseduction — but it doesn't make the Grammy milestone any less major for the band.

And the BTS Army was just as excited to see their favorites arrive at the biggest night in music. The BTS hashtag #TearItUpBTS trended on Twitter, which was filled with tweets from the band's fans expressing so much pride regarding the BTS' literal dreams coming true at the Grammys on Sunday night.

The following BTS fans were super proud of the band for making it to the awards show.

Since it's been raining in Los Angeles all day, these BTS fans credited the band for helping to stop the rain in the city at the moment they arrived at the awards show.

Some of the BTS Army expressed their excitement in all caps tweets.

So many fans congratulated BTS for their appearance at the Grammys via social media.

These members of the BTS Army expressed their excitement in many, many emojis — including purple heart emojis.

Many of the band's fans were thrilled to see BTS on American TV and tweeted about it.

The BTS Army also didn't let the band's aforementioned Grammy loss bring them down on this huge day for the band. Fans love the fact that the band was nominated for an award and even sent congratulations to the winner.

English wasn't the only language represented in the BTS Army revelry, with their fan base also tweeting how proud and happy they are of the band in many worldwide languages.

BTS seems super excited to achieve their dream of attending the Grammy Awards — and the BTS Army is incredibly proud and thrilled for the band.