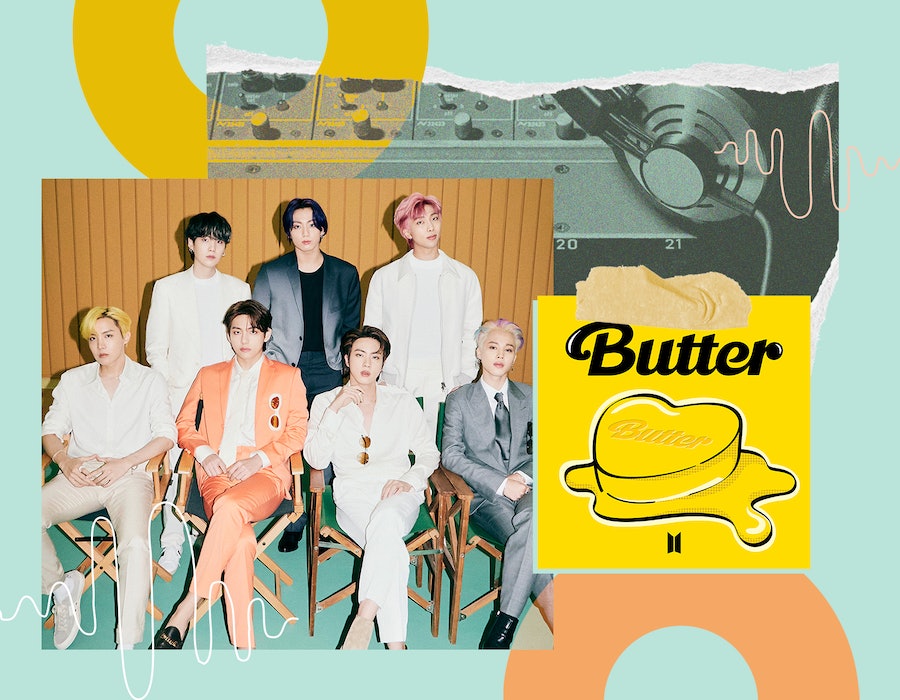 Courtesy of BTS
By Gretchen Smail
May 26, 2021
Bustle Mixtape

Nobody knows how to make a catchy summer anthem quite like BTS. The massively popular South Korean group — comprised of members RM, Jin, Suga, Jimin, J-Hope, V, and Jungkook — dominated the airwaves last summer with their first English-language single, the disco-heavy “Dynamite.” Now, they’re looking to climb the charts again with the electro-pop dance song “Butter” — a cheeky nod to their own irresistibility.

“We want to have a blast with everyone this summer,” RM tells Bustle. Jin adds that their goal was to create something “brimming with bright and positive energy” for ARMY, as BTS’ fans are known. J-Hope likens the song to a serotonin boost, joking that he hopes “Butter” will make listeners “fall for us for good.”

As any ARMY will tell you, it’s all too easy to fall head-over-heels for BTS’ inimitable charm. The group made their first studio album, 2014’s Dark & Wild — described by Suga as “a firm stance against oppression and prejudice” — in a tiny garage. (They were but rural “bumpkins” then, they once told Vanity Fair.). Since then, they’ve remained humble as they’ve amassed the trappings of musical success, earning a Grammy nomination, smashing records, and selling out stadiums. And BTS has made a point to wield their considerable influence for good, partnering with UNICEF, speaking twice at the United Nations General Assembly, donating $1 million to Black Lives Matter, and condemning hate crimes against Asian Americans.

ARMY, along with the American celebrities who’ve worked with BTS, have known for years that they’re a huge deal; as Halsey notes in her 2019 TIME100 tribute to the band, they’ve achieved nothing short of “world domination.” Yet because they’re Asian performers singing largely in Korean, some still seem to view BTS as a novelty act. In an industry that’s slow to give artists of color their dues, it feels telling that the Recording Academy didn’t acknowledge them until 2021. And though BTS has spent years crafting socially conscious and complex lyrics that weave in references to mental health, Greek philosophy, and classic literature, they weren’t nominated for a Grammy until they produced the English-language “Dynamite” — a song that, RM explains, only had the simple goal of sharing “some fresh energy” with ARMY amid the pandemic.

The band is well aware that xenophobia and racism make it harder to break into the American music industry. RM has told Rolling Stone that BTS hopes their work will help dispel such prejudices. But in the face of such hardships, the group is most vocal in crediting their fans for their continued success. In a Korean variety show interview, Suga said it was actually ARMY who “made the gateway” into the American market, by asking their local DJs to bump BTS’ songs. The members show appreciation for their fans in a myriad of ways, from connecting with them via humorous tweets and domestic vlogs to comforting them after award ceremonies: “We were nominated for the first time!” RM said after their Grammys loss. “Let’s look at the positive side.”

As the boys boast in “Butter,” they’ve “got ARMY right behind us when we say so” — and there’s good reason for that. Their music is often crafted as a love letter to the people who supported them from the basement level to today. The group’s live performances, in particular, showcase how ARMY buoys up BTS and vice versa. “On stage, you really know and feel when the cheers heat up,” Jimin says. “And it makes me want to perform better.” Naturally, seeing their Map of the Soul: 7 world tour canceled amid the pandemic wasn’t easy. Even as they adapted, staging virtual concerts and making virtual appearances, “it felt like something was missing,” RM says. But “I learned that I’m into more things than I thought I was, and that I am quite good at spending time alone,” he says. “I think I’m getting to know how to be my own friend.”

Ultimately, each of the members found ways to stay busy into 2021. Jimin teases that he’s been doing a lot of “tryouts” lately, while J-Hope says he’s focusing on “creating more mature music.” Suga has been working on a number of different projects, while V has been plugging away at his own music and “doing everything from scratch again.”

And the group is always looking to the future, to a time when they can reconnect with ARMY in person again. They’ve already announced a virtual concert in honor of their eighth anniversary, to take place on June 13 and 14. “I’m eager to do more as soon as possible,” Jungkook explains. “As it’s been a while since we did a live concert, I want to bring new innovative ideas and create a spectacular stage.”

Below, the members talk about their music writing process, their choreography, and their goals for the year.

On The Importance Of Choreography, & Members’ Individual Mixtapes

When creating a song, do you start thinking about how it might be performed onstage or turned into a music video — or does that come later?

Suga: I picture all of that when creating a song. “Daechwita” was an example of turning that into reality to its full potential, 100%.

“Blue & Grey” was originally written for V’s mixtape but ended up on BE. As a group, how do you decide which songs go on the BTS albums and which ones end up on your individual mixtapes?

Suga: As a group, you tend to deliver a more versatile story. We first write songs for a group album, and with the songs that don’t end up there, we work on our mixtapes.

V: We don’t have any set rules when we work on music, but after we finalize it we see if the song fits the group’s vibe and then decide.

In your BE-Hind Story interviews, each of you spoke about opening up emotionally on tracks like “Dis-ease” and “Stay.” Have you found that you’ve grown more comfortable with being vulnerable in your music, or has it gotten more difficult as your reach has expanded?

Jin: I understand that music makes difficult things more approachable. People around us told us that music opens our way of speaking.

J-Hope: I know it’s not easy to show your real self. But when it comes to music, it’s not like that. I don’t want to change this. I want to keep making honest, genuine music.

Jungkook: I always do my best when it comes to music, but I know there are parts that I’m still lacking. I think people will look at it as it is, and the only thing I can do is keep giving my all and filling up my shortcomings.

You’re known as a performance group with really precise choreography. How do you feel your dancing informs your music?

J-Hope: I think it’s an undeniable fact that performances really elevate and enhance BTS’ music, so we really work hard on it and pour our effort into it. That’s why I put more focus on the choreography these days.

Jimin: Choreography is another way of expressing music. You can get chills through the musical experience of course, but I think a good performance can give you a different kind of breathtaking experience as well. Coordinating with our members for our performances has brought great synergy to our group. And I also think that it has helped us effectively deliver our emotions and feelings to our audience.

You’re also known for your innovative music videos. Is there a song of yours that you wish you did a music video for, or hope to do one for in the future?

Jin: V has a solo track called “Inner Child.” I think it’s the perfect song for a stadium, so I want to have a video of us performing on stage along with that song.

What’s your current go-to song that you immediately put on when someone hands you the AUX cord?

Jimin: I listen to songs that you’d listen to when you’re alone in a quiet place.

What comes first, the melody or the words? Has this approach changed over the years?

Jin: I just start with whichever pops up in my mind and carry it out.

What song lyric, either yours or someone else’s, is resonating the most with you right now?

Jin: “Life goes on” and “the day will come back around.”

Where’s your favorite place to write or compose right now?

RM: At the studio, at home, and at Hangang River.

RM: To become a better person.

Jin: I want to perform!

Suga: I want to try working on more external projects, no matter where they may take place.

J-Hope: My personal goal for this year is to work and polish some of my personal stuff and maybe put out something. I also want to become a person who can organize thoughts in a more mature way.

Jimin: You never know when we will be able to meet our fans in person again, so I’m preparing and staying fit for that day.

V: I want to freely live a healthy life.

Jungkook: Live life to the fullest!

More like this
SEVENTEEN Went Dark On Their Newest Album — & It Paid Off
By Alyssa Lapid
Tristan Thompson Plays Drake’s Best Man In A Music Video Wedding With 23 Brides
By Grace Wehniainen
Post Malone Is Engaged To A Mystery Woman Who Just Gave Birth To Their Baby
By Hugh McIntyre
Photos Of The 'Elvis' Cast vs. Their IRL Counterparts Will Have You All Shook Up
By Grace Wehniainen
Get Even More From Bustle — Sign Up For The Newsletter