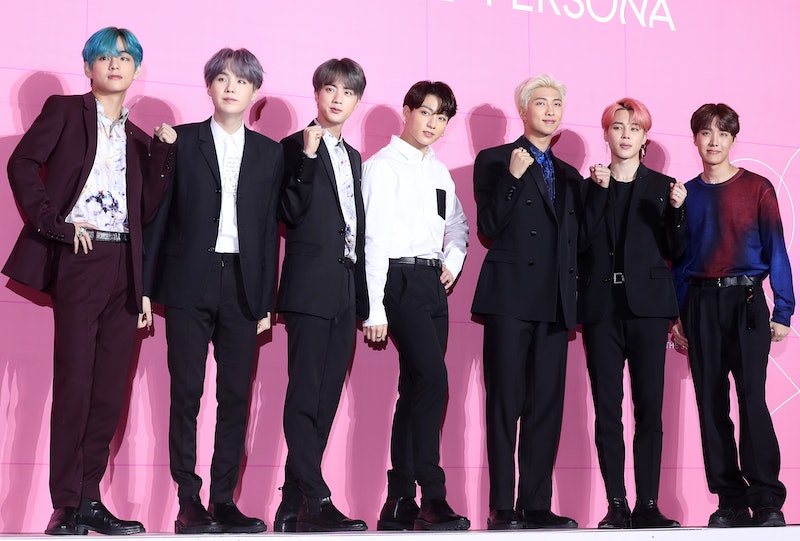 Despite having to scrap a Map of the Soul: 7 tour amid the novel coronavirus pandemic, BTS is giving their fan ARMY a dynamite two-day virtual concert experience instead. About 756,000 fans from more than 100 countries tuned in to their Guinness World Record-breaking online show, BANG BANG CON The Live, in June, but judging from the Saturday, Oct. 10 BTS Map of the Soul ON:E 's Day 1 highlights, the K-pop group decided to take their follow-up pay-per-view concert to the next level.

In fact, production costs for Map of the Soul ON:E were around eight times higher than their previous show, according to Billboard. Performing on four massive stages to give the illusion they're at four different venues, the band — which consists of members RM, Jin, Suga, J-Hope, Jimin, V, and Jungkook — included a "multi-view live streaming" display with six different screens for fans to choose from. The Map of the Soul ON:E setlists are even completely different between the Oct. 10 and 11 livestreams — all with the goal of hyping fans ahead of their new album, BE (Deluxe Edition), which is set to drop on Nov. 20.

"Our motivation is for the ARMY to be able to cheer, cry, sing, laugh, and dance, and in ways that are appropriate for a global audience, bring those emotions to the band in a way that is meaningful for the band, and for the ARMY," KISWE CEO Mike Schabel told Paper in a statement. "We really want the at-home audience to stand up and be heard, and to make sure that BTS hears them, at least figuratively if not literally."

By the end of Day 1, there were more than 110 million fan engagements, per Elite Daily. Here are some of the most memorable moments that kept fans tuned in.

During his "Persona" intro performance, the singer emerged on stage behind a podium for the solo set.

When Suga Pulled Of This Costume Change

One fan tweeted her soul left her body after Suga swapped outfits, as "Shadow" transitioned into "Black Swan."

When Jimin Danced To "Black Swan"

On the subject of "Black Swan," BTS put a new spin on the track, introducing an orchestra instrumental that gave Jimin a chance to showcase his dance skills.

... And Did This Dance Move

The musician had the ARMY checking to make sure they were all OK after he brought the heat.

When Jungkook Sang "My Time"

One fan wrote that listening to the track "will hit differently now" after hearing and seeing Jungkook's Map of the Soul ON:E live version.

When An Elevator Crashed

Not to worry, it was just illusion, during BTS's "Dope" performance.

When V Embraced His Inner Child

While performing "Inner Child" on a spinning carousel with a youngster, V drew tears from the fans.

When Jimin And RM Teared Up

ARMYs weren't the only ones crying: Jimin and RM both got misty-eyed talking about how sad they were not having their fans there in person.

When J-Hope Showed Off New Tattoos

Eagle-eyed viewers spotted his fresh ink with the words "First Love" and "Hope," though some remained unsure whether they were permanent or temporary.

When They Reminded Fans They're "Bulletproof"

The classic BTS bomb light sticks were fully aglow for their finale performance, as they spread their hopeful message.