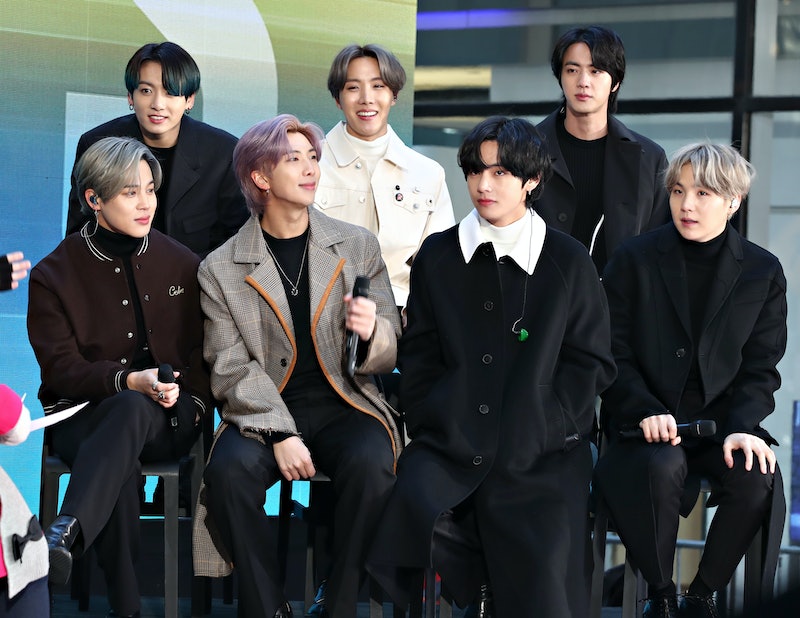 With Min Yoon-gi sidelined by injury, BTS performed with a Suga hologram at the Mnet Asian Music Awards on Sunday. The group was joined by the hologram for a "Life Goes On" verse, and fans are freaking out about the uncanny projection. Now more than ever, the ARMY knows you leave no man behind.

On Twitter, BTS stans reacted to the high-tech performance, with many fans getting emotional over the fact that that all seven members were able to perform together. One BTS fan teared up over the hologram, tweeting, "I literally havent stopped crying since I saw the yoongi hologram in the MAMA performance." Another user also reported crying at the performance, writing, "THIS IS LEGIT THE MOST EMOTIONAL PERFORMANCE EVER." Yet another member of the BTS ARMY tweeted, "BTS said love all 7 or go home, BTS is 7."

While most fans were excited to see a nod to Min in the performance, some people couldn't help but feel the hologram was a little too realistic. One fan joked on Twitter: "i get that it was meant to be a wholesome moment but that yoongi hologram is gon feature in my nightmares." A journalist, Lenika Cruz, noted that the hologram was an homage to the groups devoted fans, tweeting, "The yoongi hologram was basically big hit saying to army 'we know you guys are just gonna edit him in anyway so here you go.'"

Suga has been unable to perform since undergoing surgery in early November to address a long-term shoulder problem. On Nov. 6, BTS record label Big Hit Entertainment shared a statement about the rapper's operation. "The surgery, to address a problem that had constantly been a health and wellness issue for Suga, was completed successfully," it read in part. The statement revealed the procedure would require the singer to take time off from work, stating, "He is currently resting and recovering following his physician’s advice that Suga must undergo a strict and unhindered period of recovery."

Big Hit Entertainment informed fans that Suga's injury was the result of a 2012 accident, where he sustained a posterior labral tear, or torn cartilage in the shoulder. The singer continued to suffer "a variety of symptoms" from the tear that became more frequent in recent years, and affected him "not only on the stage but in the course of his daily life as well." The label added that it "could be difficult for Suga to meet his long-awaited fans for some time, including for the upcoming BTS BE album promotional activities."

In the meantime, BTS fans seem pretty happy with the hologram substitute.