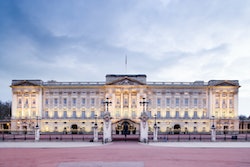 If our fascination with the royals hadn't peaked with The Crown, a new development might – or at least add a plot line were Netflix to extend their run. A Buckingham Palace catering assistant has pleaded guilty to stealing more than 70 items from the Queen's London residence, Sky News reports.

Adamo Canto pleaded guilty at Westminster Magistrates' Court to three counts of theft between November 2019 and August 2020. Among his haul were rare medals and personal photographs.

Canto, from Scarborough, North Yorkshire, began working at the Palace in 2015, and had his role extended to include more cleaning during the pandemic which gave "him access to more areas of the palace than he usually would have," according to prosecutor Simon Maughan. Though the majority of items were taken from the Palace shop, Canto is also being charged with taking objects "from staff lockers, the linen room, the Royal Collection ticket office, the Queen's gallery shop, and the Duke of York's storeroom," per Sky News.

The thefts where discovered when the catering assistant listed the stolen goods on eBay, including two medals worth between £10,000 to £100,000, which he sold "well under" their true value, making £7,741 for 34 items sold. This included a royal state banquet photo album of President Trump's UK visit, worth £1,500, as well as official signed photos of Prince Harry and the Duke and Duchess of Cambridge.

Canto also admitted to stealing Vice Admiral Tony Johnstone-Burt's Companion of Bath medal, who realised it was missing when he went to wear it for the Trooping of the Colour on June 13. "I discovered my Companion of Bath medal and box for sale," Johnstone-Burt, who works at the Palace as the Master of the Household, said in a statement read in court. "It was up for sale for £500. However, it had been sold for £350."

Since pleading guilty, Canto has been released on conditional bail and will be sentenced at Southwark Crown Court "at a later date," per BBC News.