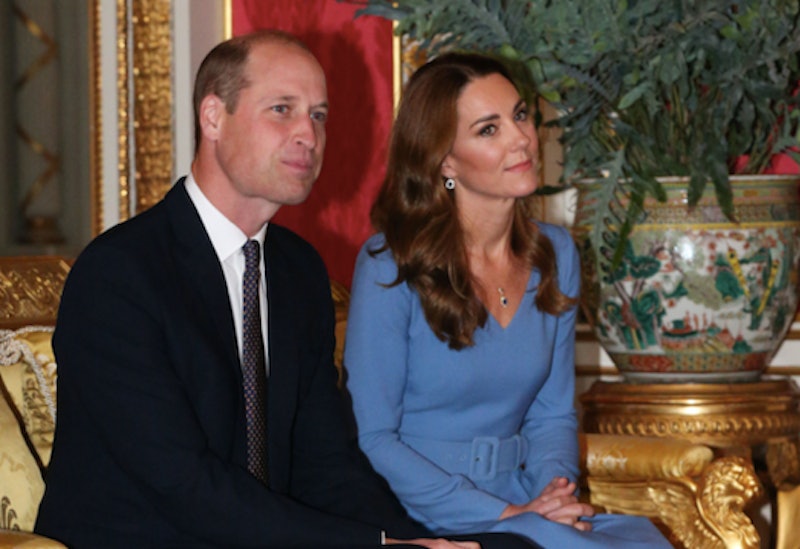 Whether it's an outright homage or a simple token tribute, modern royals have been taking style cues from the late people’s Princess for years. While she sadly didn't get to meet her late mother-in-law, Kate Middleton never shies away from following in Princess Diana’s fashion footsteps, especially for official business. Her and Prince William stood in for the Queen (who remains at Windsor Castle amid the pandemic) to welcome the President and First Lady of Ukraine at Buckingham Palace this week, and Kate chose a rather touching tribute to Diana for the occasion.

Though Kate has made many appearances over the pandemic period – from Zoom calls to garden centres to universities – this was the first official meeting held at the Queen’s official London residence since lockdown began. Her and Prince William's first audience at Buckingham Palace since the start of quarantine, called for a return to polished perfection for the Duchess.

Kate chose one of her favourite designers to meet with Ukraine's President Volodymyr Zelensky and his wife Olena on Wednesday (Oct. 7). The Duchess of Cambridge wore a custom forget-me-not blue Emilia Wickstead dress with long sleeves and a matching belt, which she paired with her trusty Gianvito Rossi nude beige pumps. But it was a pair of diamond and sapphire drop earrings, and a matching sapphire and diamond pendant necklace, that really caused a buzz.

To match her Garrard engagement ring, the Duchess wore her sapphire and diamond drop earring, which were originally Princess Diana’s, and passed down to William and Harry after her untimely death. They were then gifted to Kate by William on their wedding day in April 2011. Kate had the earrings customised into drop earrings and debuted them on the couple’s royal tour of Canada in 2011. They have since become a staple of her stately style.

Eagle-eyed fans believe the necklace Kate wore to meet the President and First Lady of Ukraine is another Princess Diana tribute. They believe it was made from a pair of earrings from Princess Diana's personal collection. The earrings in question being part of a priceless collection of jewels named The Saudi Suite, a gift from the Crown Prince Fahd of Saudi Arabia, gifted to the late Princess for her wedding to Prince Charles in 1981.

The set is as grand as the name implies. Made by luxury brand Asprey, it included “a matching pair of earrings and ring; a two-row bracelet of brilliant-cut diamonds with a smaller version of the sapphire pendant as a centrepiece; and a wristwatch, the face set in the same diamond sunray fringe and the strap consisting of seven oval sapphires set in clusters of diamonds,” according to royal expert and The Queen's Jewels author Leslie Field. The pendant necklace featured a large Burmese sapphire set in a sunray fringe of baguette diamonds, too.

Given the size of the sapphires and the baguette-cut diamonds of The Saudi Suite, it's highly unlikely that it has been reincarnated as Kate's new pendant. Royal watchers suggest instead that the Duchess' pendant was the reincarnation of Diana's original sapphire and diamond earrings that Kate was gifted by William nearly 10 years ago. (When she shortened the earrings – they originally featured two drops – she was left with stones to rework, they argue.)

Either way, the Duchess’ token tribute to the late Princess did not go unnoticed. Whether the Saudi Suite necklace or a styled sapphire pendant, Diana knew the power of a perfectly cut piece for a royal occasion, and the Duchess has followed closely in her footsteps.