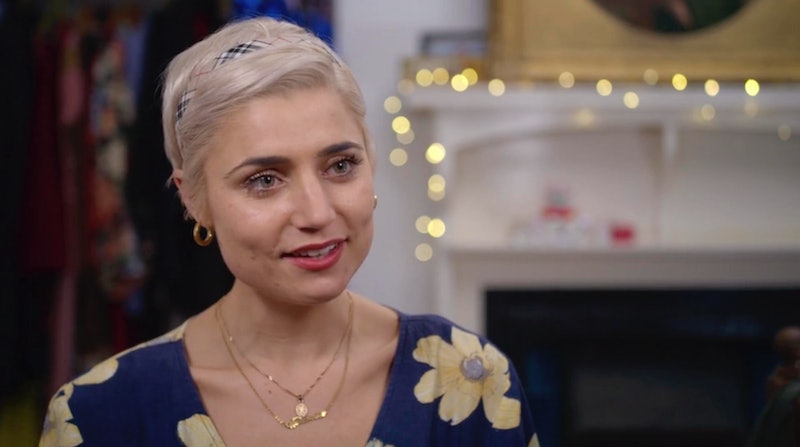 Before last week, I'd not heard of Five Guys A Week. Now, a mere seven days later, I can officially say I'm hooked. The show's premise sees one woman invite five potential love interests to live with her over the course of a week, and eliminates them one by one until she is left with the guy she wants to be with. In short, it's like a British Bachelorette, without all the added glitz and glamour, making it real, raw, and fascinating to watch. Last week I spoke to Five Guys A Week's Bonnie Milnes, the 25-year-old musician from York, who stars in the second episode of season two. Here she reveals everything from how the process really works to why it's a show everyone — women and men — should be proud of.

Why did you apply to this specific show?

People said I was mad for doing it, but it was the best week of my life! I had guys coming over making my tea for me, serenading me… But truth is, I'm busy. I have a band and a business and work really hard, and I’m also from a really small town so dating is quite a bit of effort! Five Guys A Week made it super easy to find five guys who were suited to the different aspects of my personality without having to use things like Tinder and Bumble.

Did you know anything about the guys before filming?

I picked them from photos and general interests, but I didn't know much else about them. Each one had a different quality that matched my interest: music, fashion, yoga... I decided to go for a real mixed bag to see who would be the best match for me.

Did you get worried the guys were more there to compete/‘win’ rather than actually for you?

There was an element of that and there’s definitely a competitive element to the guys, but in the end the ones who ended up staying didn't say that kind of stuff because it doesn’t sit well with me.

What I love about the show actually was the level of control and lack of guilt I felt when each guy left. It's a feminist show, for sure. I think as women, we are people pleasers. There's been so many times in my life where I’ve skirted around saying 'no' to somebody, or skirted around telling somebody I didn’t want to be with them because I felt bad. Not so here, though!

It was nice to see on the first night the guys all opening up around the dinner table. Do you think in that way the show could encourage men to talk about their feelings more?

I really hope so, because we live in a toxic world. For men, rule number one is don’t talk about the ex. But everybody has a past! Charlie was so open about his previous heartbreak. That does not put me off anybody and I don’t think it does anyone, but then there’s this myth that you’re not supposed to talk about your past and men are supposed to be closed off. I hope Charlie inspires other men and shows them it’s actually a really attractive quality, to be able to open up like that.

How did you make the decision each night to get rid of someone? What was your thought process?

It was actually so much fun! Number one question I asked myself was: ‘Do they make me laugh?’ then, whether I had a romantic connection with them or not. It was pretty easy, to be honest. It’s kind of like The Bachelorette but a ‘I’m not rich’-version!

Have you stayed in touch with any of the guys, besides Reuben?

Yes, we all have a group chat on Whatsapp, which is hilarious! Ray is constantly sending us funny things. And I think I am going to go up and see Charlie soon in Newcastle because we have the most things in common I think, he’s just a really funny lad. We all got along really well.

You can watch both series one and two of Five Guys A Week over on All4.

More like this
Joey Essex Is Rumoured To Be Dating A 'Love Island' Favourite
By Sam Ramsden
ITV’s New Take On 'Love Island' Is Only For MILFs & DILFs
By Sam Ramsden
Barney Walsh Has Been Linked With This Famous Miss World Winner
By Sophie McEvoy
'The Traitors' Is Officially Being Turned Into A Board Game
By El Hunt
Get The Very Best Of Bustle/UK
Sign up for Bustle UK's twice-weekly newsletter, featuring the latest must-watch TV, moving personal stories, and expert advice on the hottest viral buys.