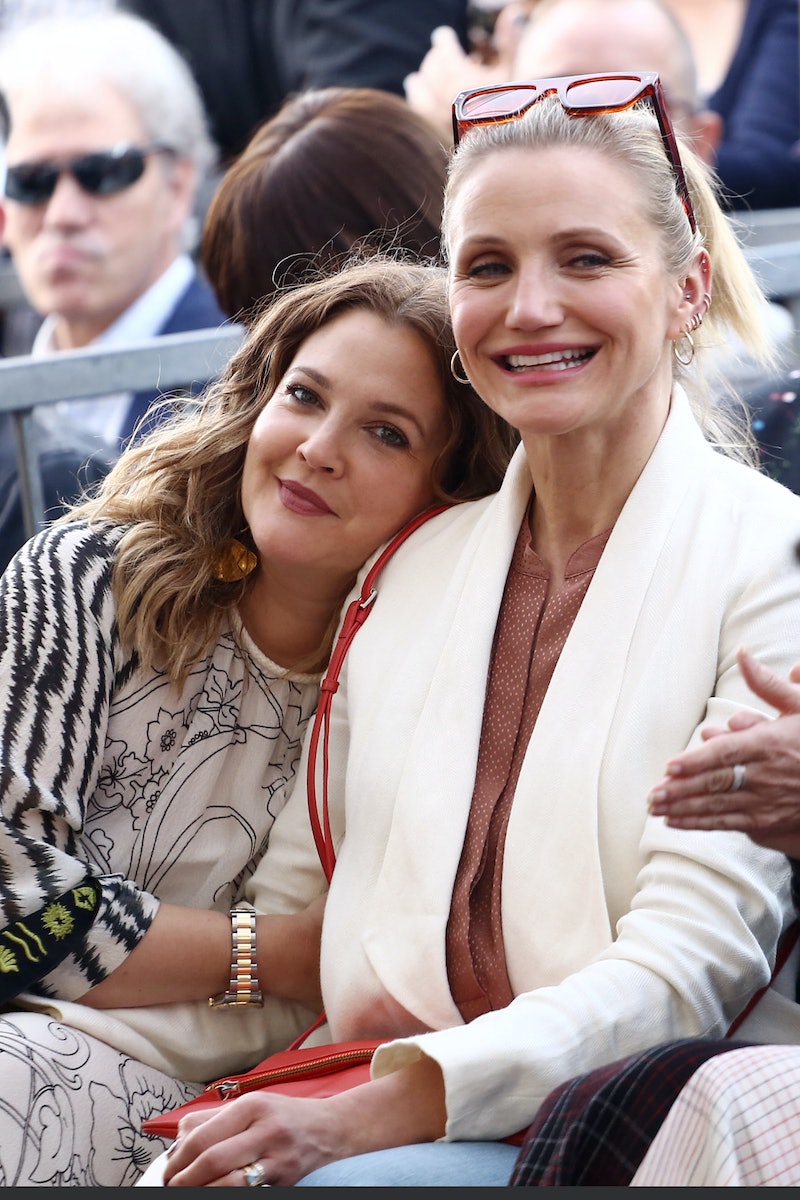 Charlie's Angels fans want nothing more than to hear Natalie Cook, Dylan Sanders, and Alex Munday say "Good morning, Charlie" just one more time, and the stars themselves could make that happen. Cameron Diaz and Drew Barrymore had a mini-Charlie's Angels reunion on Monday, Feb. 22, making it clear that the pair is as close as ever — and open to a revival of the iconic film series.

To celebrate her 46th birthday, Barrymore gave up all control of the Feb. 22 episode of her talk show, allowing her staff to plan fun surprises. But she ruined the surprise of Diaz's appearance by guessing who it was before she showed up on Zoom. Apparently, the longtime friends always spend their birthdays with each other. "Usually, we get to actually be together," Diaz explained. "We are not big gift givers, we're more about experience, so we always try to go some place and do something with the girls and be together. Cook, eat, hang and stay up all night and just have the best time."

The two reflected on their friendship, explained why they call each other "Poo Poo," and of course, talked about Charlie's Angels. When a potential revival with fellow co-star Lucy Liu was brought up, the virtual audience made it clear they wanted to see it happen. "I'm glad that people feel that way," she said. "I'll be grannies in inner tubes with Poo Poo, so we can do anything and everything as long as we're together. I have a whole life to live with you."

While there's no official Charlie's Angels revival on the table as of yet, Diaz agreed, saying she "felt the same way" about working with Barrymore. "I always say never say never," she teased. "There's never a time where we're not going to be connected or consider something together." However, it might be a while before it happens, should a new film actually come to fruition.

As of 2018, Diaz has retired from acting. She hasn't starred in a film since the 2014 remake of Annie, and has no plans to make a comeback soon, especially after becoming a mother to her one-year-old daughter Raddix. "Will I ever make a movie again? I'm not looking to, but will I? I don't know," she said in a SiriusXM interview on Feb. 21. "I have no idea. Never say never, but I couldn't imagine being a mom now, where I'm at as a mother with my child at her first year, to have to be on a movie set that takes 14 hours, 16 hours of my day away from my child."

While she won't make time for a film set, she always makes time for her girls. To commemorate the launch of Barrymore's talk show in September 2020, Diaz and Liu joined her for a proper Angels reunion and reflected on their 20-year friendship. "We have Charlie's Angels as sort of our backdrop that brought us together, but then we get to fill in all of life together," Diaz said. Liu agreed, admitting, "I know that 20 years have gone by, but I feel like it was yesterday." Perhaps one more Angels movie is what will convince Diaz to come out of retirement after all.