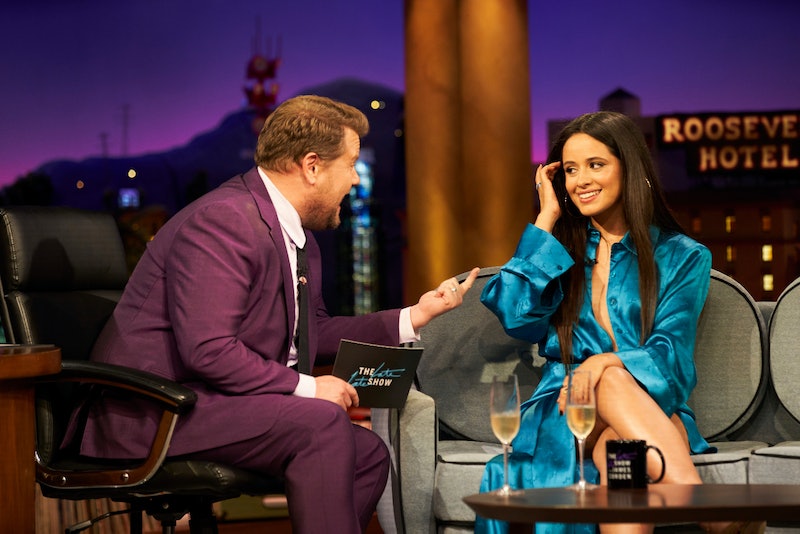 Familia is still on its way, but luckily fans have another new Camila Cabello single to enjoy as they await her third studio album. The three-time Grammy nominee appeared on The Late Late Show with James Corden to promote “Bam Bam,” her collaboration with Ed Sheeran, on Friday, March 4, and while she was there, she made sure that both Corden and fellow guest Nathan Lane knew how to say the song title correctly. If you’ve been pronouncing it like Bamm-Bamm Rubble from The Flinestones, it’s time for a lesson.

“I like how you say it,” Cabello told Corden after he praised her for the song, saying he thinks it will be “an absolute smash.” She assured him he was saying it correctly because he admitted he’d been told how to do it. Apparently, he’d been reading it with the “a” sound from the word “animal,” when it’s more of an “ah.” That was exactly the incorrect pronunciation the singer and her team had been afraid of, Cabello said. “Bam Bam” needs “that Latin flavor,” as she put it.

Corden and Lane both practiced pronouncing the song’s name correctly (“Bahm Bahm”), which then prompted Cabello to offer one more small critique to help them get even better at it. By the time she was satisfied with their work, they’d all really earned the glass of champagne they were having to toast her 25th birthday.

Amid her lesson, Cabello also explained what “Bam Bam” means. “It’s something that my mom has always said to me,” she said. “It’s about the cycles of falling in love, falling out of love; life has its up and downs. You got to roll with the punches, you got to keep dancing.”

There has been speculation that the lyrics could be about her ex-boyfriend Shawn Mendes, whom she split from in November, and the singer’s explanation likely didn’t discourage it. In fact, she was recently candid with Zane Lowe about how her “focus has really shifted” in recent years and so have her priorities as she’s gotten older. “Bam Bam” is about accepting the changes life brings. “Hopefully, this can make you be like, ‘It is that way now,’” she told Lowe, per Billboard.

The way it is now for Cabello is exciting. On The Late Late Show, she also talked about how “fantastic” it was to work with Sheeran on a single for her new album. “I’ve been such a huge fan of Ed’s for such a long time, and … it was such a full-circle moment getting to, you know, be in the studio … and write this with him,” she explained.

More like this
Who Is Camila Cabello Dating? She's Getting Cozy With Lox Club CEO Austin Kevitch
By Radhika Menon
Kathy Hilton Tried To Explain Why She Misidentified Lizzo As Precious On Live TV
By Jake Viswanath
Selena + Chef Season 4 Was Filmed At Hannah Montana's Old Malibu House
By Jake Viswanath
Harry Styles' 'X Factor' Audition Didn’t Start Off As Well As You Thought
By Jake Viswanath
Get Even More From Bustle — Sign Up For The Newsletter