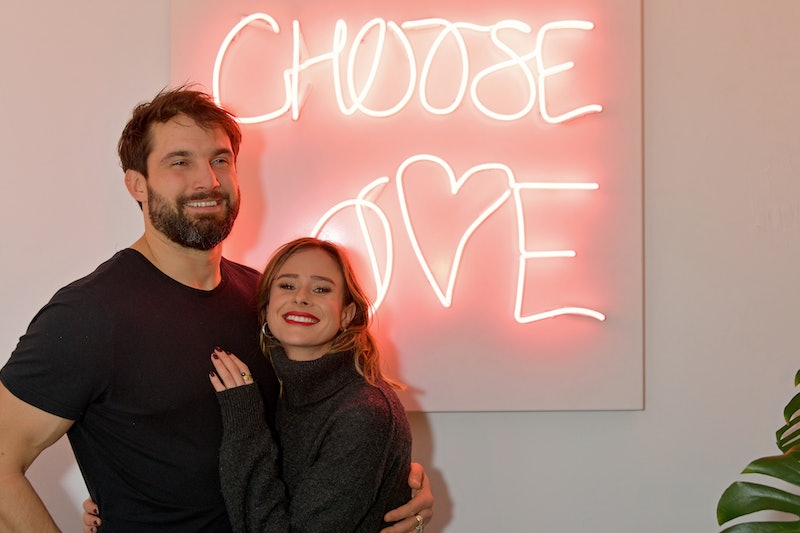 Love Island has produced a number of brilliant couples, but not many have lasted as long as Camilla Thurlow and Jamie Jewitt. The pair have covered a lot of milestones since coupling up in Mallorca, from starting up a business venture together (@lovejamilauk), welcoming their first child and, most recently, tying the knot.

Their daughter, Nell Sophia Jewitt arrived on October 27, 2020. And almost a year later exactly, at the beginning of September 2021, the pair walked down the aisle and said I do. Details about their wedding are few and far between but it’d seem some of their villa pals were there with them to celebrate on their big day. So now's the perfect time to look back at one of Love Island's biggest – and most adorable – success stories.

Thurlow was in the Love Island villa from Day 1, and had her fair share of heartbreak, courtesy of Jonny Mitchell and Craig Lawson. But on Day 32, a certain Calvin Klein model sauntered into the villa and into Thurlow's heart, and thus began their adorable courtship.

Despite coming in second, the couple assuredly won the nation's hearts and continued to do so when they arrived back on British shores. The two started divvying their lives between Scotland and Essex and keeping fans in the loop via Instagram. (They remain our firm faves of all the Love Island couples that are still together.)

Before jetting off to Mallorca, Thurlow was an explosive ordnance specialist for The Halo Trust, a non-profit that's been "saving lives and helping war-torn communities recover, by making their land safe," as the charity's site explains.

Continuing her humanitarian work after Love Island, Thurlow took Jewitt on a trip to Greece in support of the charity A Drop in the Ocean in August 2017, where they delivered "essential food and clothing in a dignified manner under difficult circumstances," she wrote on Instagram at the time.

Jewitt and Thurlow's work for The Halo Trust continued into 2018, where they partook in a 30km walk to support Syrian refugees, and children affected by mines in particular.

Later in 2018, the couple announced their joint business venture, Love Jamila, which focuses on well-being products like candles and framed poetry that are "kind for you, kind to others, and kind to our planet," as per their bio.

Ten per cent of turnover from their products goes "towards helping refugees across Europe and the Middle East," which you can see the direct impact of on their Insta page.

As has become somewhat customary of Love Island alumni, Thurlow had her own docu-series on ITVBe, What Camilla Did Next. It didn't run for that long, but it gave a fascinating insight into her humanitarian work, as well as her's and Jewitt's life together.

February 2019 — Moving In Together

Nearly two years after initially getting together, the couple moved in to their first house, as Thurlow shared online: "And we are in! 🔑🏠! Had such a fun day with @jamiejewitt_ picking up the keys for the house we have found to rent! Can't wait to get it all sorted and move in properly with our two little puppies Audrey and Gus 🐶"

The Love Island couple never shy away from complementing each other on their social medias, but Jewitt's post on International Women's Day for Thurlow was just too much. "Nothing but love. Happiness. Understanding. 👆❤️#happyinternationalwomensday," the caption reads, accompanied by a pic of the two in bed holding hands. My heart.

A precursor to the recent news, Jewitt's brother Ross had his first child and the couple officially become an auntie and uncle. To honour the news, Jewitt posted an adorable pic of the two fawning over their nephew, Jesse James.

Revealing the news to the tune of 'Ice Ice Baby', the next Love Island baby is expected to arrive in October this year. "So @camillathurlow and I have managed to make something pretty special 🤔 and we're not talking about the video... 🥳🕺🏻❤😍🤗 #october2020#17weeks", Jewitt wrote on Insta, as did Thurlow in a similar post.

Nell Sophia Jewitt arrived at 4.32am on Oct. 27, weighing 6lb and 5oz. Both Thurlow and Jewitt posted adorable snaps of their new arrival, with the latter writing: "After all of life’s ups and downs I can honestly say this morning brought on a monumental change of perspective. From this day forward I promise to be the very best version of myself for you and your mum and do my best to give you both everything you could possibly ask for."

Following the birth of their daughter, Jewitt asked Thurlow to marry him– and baby Nell played a key part in the proposal. In a picture on Instagram, Thurlow revealed that Jewitt hadn’t just bought her a dreamy ring but had also gifted their daughter an adorable babygrow that read, “Mummy, will you marry my daddy?”

The pair had an intimate ceremony in a manor house on September 2 with their nearest and dearest in attendance. The pair managed to keep their day a secret but posted images from the wedding a few days later.

Next to one picture of the couple, Thurlow wrote, “Thank you to our wonderful family and friends for bringing so much love, joy and fun to this magical day, we love you so much.”

Jewitt’s podcasting partner Jake Quickenden and Love Island villa pal Marcel Somerville were among some of the congregation. Somerville posted photos from the day alongside a very sweet caption that read “I was there when they got together, saw their connection spark into life and yesterday I got to see 2 of my love island besties tie the knot! It has to be be one of the most beautiful weddings I’ve ever been to!”

This article was originally published on May 18, 2020