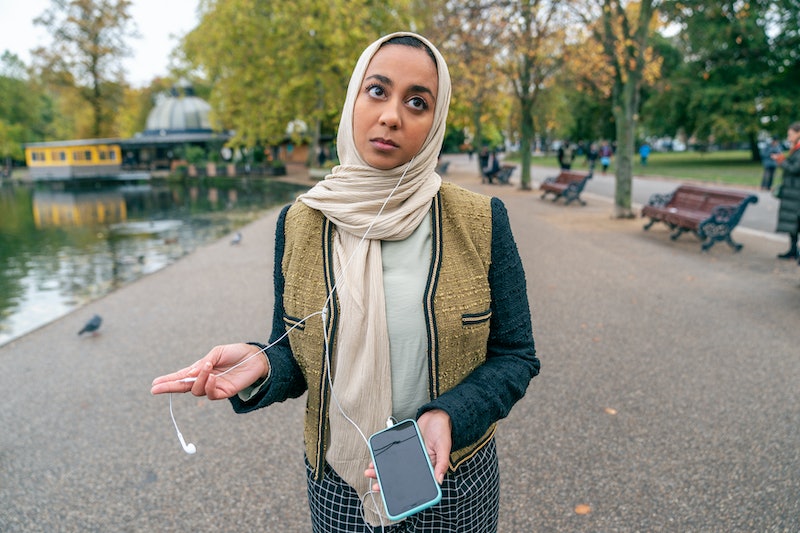 C4’s series We Are Lady Parts features a banging soundtrack, and it’s all down to the fictional band at the centre of the story. Throughout the sitcom’s six episodes, the all-Muslim female punk band play a variety of covers to their own original tracks, including “Voldemort Under My Headscarf.” If you’re as obsessed as I am with these tunes, you’re probably wondering, where can you listen to the We Are Lady Parts music?

Thankfully, the answer is yes. The official soundtrack is available on a variety of streaming services including Spotify, Apple Music, Amazon Music, and Deezer. “I feel so excited to get to share the We Are Lady Parts soundtrack!” show creator Nida Manzoor said in a press statement sent to Bustle. “The band’s music is such an intrinsic part of the show. Through the music, we see the characters in their element and singing their truth, capturing them in all their joy and silliness.

“This soundtrack is best enjoyed turned up to eleven, headbanging alone in one’s bedroom.”

The album consists of six tracks, including four original songs (“Ain’t No One Gonna Honour Kill My Sister But Me”, “Bashir With The Good Beard”, “Voldemort Under My Headscarf”, and “Fish and Chips”) written by Manzoor and her siblings Shez, Sanya, and Benjamin Fregin, as well as covers of Dolly Parton’s “9 to 5” and Queen’s “We Are The Champions”.

More like this
Eurovision Has Been Given A Whole New Look Ahead Of Its Liverpool Debut
By Bustle UK
All The Ways You Can Watch The Super Bowl In The UK
By Asyia Iftikhar and Darshita Goyal
Olivia Colman Stars In First-Look Trailer For BBC's 'Great Expectations'
By Sabah Hussain and Sam Ramsden
Twitter Simply Couldn’t Cope With The ‘Happy Valley’ Finale
By Sophie McEvoy
Get The Very Best Of Bustle/UK
Sign up for Bustle UK's twice-weekly newsletter, featuring the latest must-watch TV, moving personal stories, and expert advice on the hottest viral buys.