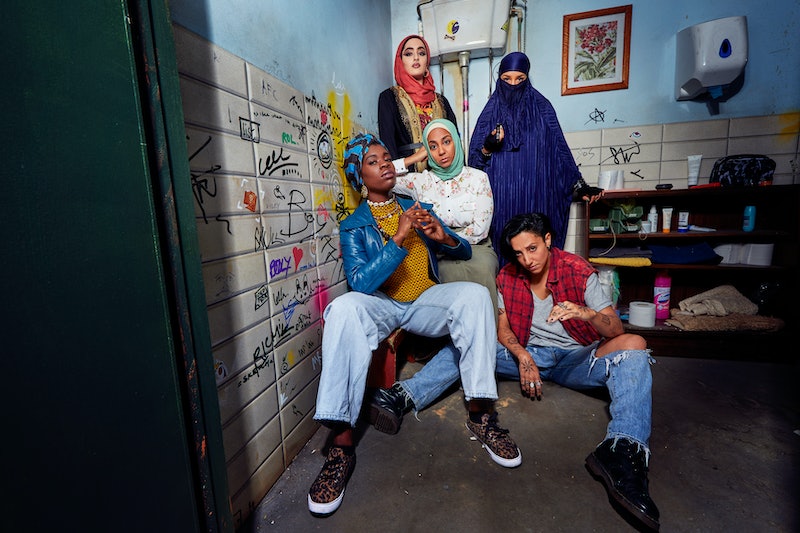 For the cast of We Are Lady Parts, filming a musical comedy about an all-female Muslim punk band represented more than just another credit on their resumé: it offered the chance to combat stereotypes, build long-lasting friendships, and discover what being punk really means to then.

The show, which begins airing on May 20 at 10 p.m. on Channel 4, explores sisterhood, belonging, and finding your voice and, when I sit down (via Zoom) with Shorthouse, Omole, Vasan, and Motamed, I can see how these themes have stayed with them off screen, too. Our conversation is full of laughter, passion, and authenticity. At one point, Omole – whose character Bisma is the mother hen of the group – tells me “I think our friendship has longevity.” And I believe her.

Being all too familiar with the stereotypical portrayals of Muslim women in TV, film, and the media, the team behind We Are Lady Parts – led by writer and director Nida Manzoor – offers a refreshing take, proving just how multifaceted this community can be. The show opens with Amina, a PhD student desperate to get married, doing an accidental audition for Lady Parts. Saira – the band’s frontwoman – sees a spark in Amina, her former schoolmate, and eventually, she’s brought into the fold. Queue chaos, loud concerts, and concerned parents. Be warned: this show will leave you wanting to form a rock band with your girlfriends.

Below, the cast and I discuss their experiences on set and what they want viewers to take away from this revolutionary new show.

Aisha Rimi: What attracted you to this project?

Juliette Motamed: When I read the script, I was so impressed and blown away by how much care was put into every single one of the characters. The writing was so thoughtful, tender and considered and made me feel like this is a piece of art that someone put so much love into.

Faith Omole: It’s something we’ve never seen before. It’s so amazing to read Nida’s mind and you see all these crazy places she goes to. Everything is so true and authentic.

Anjana Vasan: On a [basic] level, it was also really funny. The writing was so good. That silliness and humour and women being silly is really underrated and actually really powerful. I love that Amina is an oddball and she’s just weird. I think that it’s actually a bit of a superpower to play someone who is a bit of a weirdo.

“Our friendship made even the toughest parts of filming so much easier because there’s trust with each other. It made it easy to play and challenge each other.”

AR: It’s great seeing you altogether because it seems like you have a great relationship. What was it like working together?

FO: It was amazing, like the most colourful painting. I joined quite late onto the project and I walked in shy on the first day and these girls were the most welcoming, funny, amazing girls, and just so talented. We all just felt so comfortable with each other so quickly and so safe. We were filming during COVID so we were all in a bubble. It’s so nice because we play girls who support each other and love each other. Our friendship made even the toughest parts of filming so much easier because there’s trust with each other. It made it easy to play and challenge each other.

AR: Portraying Muslim women, were you conscious about what you were stepping into, how you would approach the roles, and what the reception would be?

AV: I wouldn’t have had the confidence to say yes to part if not for the fact that Nida, as a woman from a Muslim background, was both the writer and director. We often talk about representation on screen but we don’t talk enough about it off screen. There’s a level of authenticity that she already brings to the page. She draws all the characters, their contradictions, flaws, and their lived experiences from her personal experiences and the people and women that she knows and loves. I had the confidence to ask anything and she would always be the voice of authority in the room with regards to that.

“I wouldn’t have had the confidence to say yes to part if not for the fact that Nida, as a woman from a Muslim background, was both the writer and director ... There’s a level of authenticity that she already brings to the page.”

AR: There will be some people who will watch the show and say ‘That’s not how Muslim women should act.’ Are you anxious about that?

AV: I don’t think the show tries to say this is representative of all Muslim women. They’re multifaceted, have different world views and different viewpoints. Nida wanted to portray Muslim women with joy, love, and sisterhood. That was always her intention, and that was the intention of the show and I think it comes across.

FO: It should encourage people to know that their stories and their voices have a right to be heard in every way and that's all it should do. What Nida’s done is put herself and her world on the page and I think it should be encouraging to people.

“I don’t think the show tries to say this is representative of all Muslim women. They’re multifaceted, have different world views and different viewpoints. Nida wanted to portray Muslim women with joy, love, and sisterhood.”

AR: I loved all your different looks and the way you tied your hijabs. Did you have a stylist that helped with that?

AV: P.C. Williams [the show’s costume designer] spent hours and hours practicing tying the headscarves so that she would be able to do it herself before she did it for an actor.

JM: I can’t explain to you how knowledgeable and in touch everyone was. When we’re talking about diversity behind and in front of the camera, that was really present in all facets of the costume department. Everyone was not just respectful, but really thoughtful. You see a variety of different styles which is gorgeous because it reflects the variety of life.

AR: Music plays such a key role in the show. How important is music in your own lives? Did you know how to play your instruments beforehand?

FO: No, we actually didn’t. I got cast and then we were starting in two weeks and I got a bass sent to my house and had lessons on Zoom. Even in the audition process, I had to look like I didn’t care whether or not I could play it. I just had to look like I enjoyed the music. Now I can’t listen to a song without listening to the bass, but it was hard to learn.

Sarah Kameela Impey: I’d been in a band for six years a long time ago, but as a singer. To learn to sing punk was like trying to shed all that stuff and it was so raw. I’d asked the universe if I could have a role where I get to play an instrument. So, when this guitar came into my hand, it was great.

AR: Your characters exude such confidence. What advice would you give to young girls who may be struggling with self confidence?

FO: You don’t have to try and be anything apart from yourself. I don’t think any of these characters aren’t trying to be themselves. You just need to love yourself and take time to understand yourself and be what you want. Trying to be what society wants is just boring.

“Punk is so much about misfits and doing something without having getting approval because you wanted to make it yourself.”

AV: I would actually say I'm not that confident. Amina’s journey is about finding self-confidence and self-love and I was really moved by that. Nida and I sat down and discussed Amina's obsession with finding [a romantic partner], and ultimately it’s filling a void. She suffers from stage fright which comes from a real fear of acceptance and people laughing at her, and I can definitely relate to that. We tend to see actors as extroverts and actually some of us are introverted. So I think young women can watch this show and relate to that shyness and awkwardness and know it’s fine and not something to be ashamed of.

AR: What would you like viewers to take away from the series?

AV: I would say, celebrate each other’s uniqueness. Celebrate what makes each other different and love each other for it. I think friendship is one of the most important and most precious things you can find and your stories deserve to be heard and seen. Punk is so much about misfits and doing something without having getting approval because you wanted to make it yourself.

We Are Lady Parts launches on Channel 4 at 10 p.m. on May 20 and will be available to stream as a boxset on All 4.