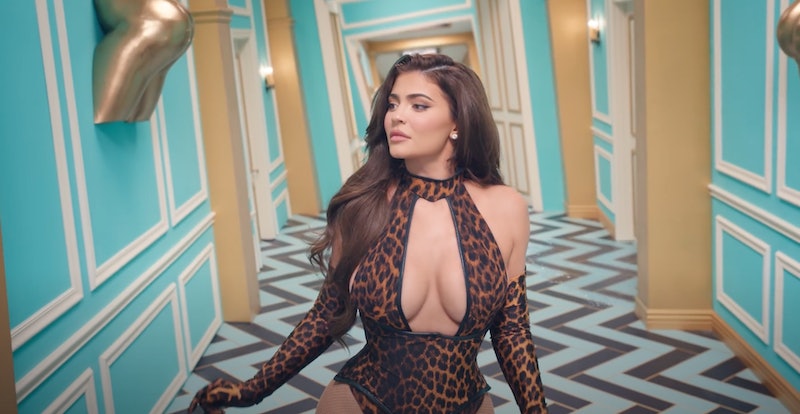 Cardi B and Megan Thee Stallion's new collab single "WAP" is making huge waves, but not just for its eye-popping music video and brash yet clever NSFW lyrics. Many people are upset about one particular guest in the record-breaking video, and to say the rappers aren't interested in all the hate would be an understatement. Cardi B defended Kylie Jenner's "WAP" cameo after the surprise appearance sparked online backlash, with many on Twitter criticizing the inclusion of a white woman who has repeatedly been accused of appropriating Black culture.

Cardi defended Jenner's cameo in a series of tweets on Sunday, Aug. 9. Though she deleted most of the tweets, save one, the rapper's comments were captured by fans before they were taken down. In the tweets, Cardi responded to writer Danielle Young, who compared Normani's appearance, in which the singer showed off her best moves (and did the splits), to Jenner, who simply walks down a hallway and opens a door in the video. "If that’s not a perfect visual indication of Black women having to do the most and white women do the bare minimum to get somewhere, I don’t know what is," Young wrote.

In response, Cardi said that she asked Normani to dance in the video because of her skillset. "Normani is one of the best female artists that dances," she wrote, per a screenshot captured by Pop Crave. "Like she dances her f*ckin' ass off! Why would she open a door? Please tell me how that would make sense?" She went on to say that their respective appearances have nothing to do with race in her eyes. "Not everything is about race," she wrote. "There's issues out here in the world that it is about race that I preach all the time about."

In her last statement on the Jenner-inspired backlash, per the screenshots, Cardi explained that she specifically chose to include Jenner in the video because of how the star has treated her family. "She treated my sister and daughter so lovely at her kid bday party," she wrote, adding that her husband Offset is close with Jenner's on-again, off-again beau Travis Scott and that she has a great relationship with Jenner's mother Kris, who has given her "advice on certain things I ask for."

Cardi did not comment on the allegations of Jenner appropriating Black culture. Jenner has previously faced criticism for wearing cornrows several times and was even accused of blackfishing by sporting dark makeup and spray tans in photoshoots, and many fans were disappointed in Cardi for seemingly validating Jenner without criticizing her insensitivity to Black culture. "I want to read a think piece on Black celebrity women accepting known cultural appropriators and the reasoning of why this happens and implications of this behavior," one Twitter user wrote. "While I adore Cardi and Meg, why do they ignore this about Kylie?"

The backlash even sparked a Change.org petition asking to remove Jenner from the video, which, as of Monday, has garnered over 65,000 signatures. However, others have also come to Jenner's defense, acknowledging that her presence will bring more views to the video, ensuring that it becomes an even bigger hit for Cardi and Megan. According to BuzzFeed, Cardi even liked a tweet with this sentiment, though the tweet has also since been deleted. Regardless, Cardi B doesn't seem too concerned with any criticism, especially as "WAP" continues to climb the charts.