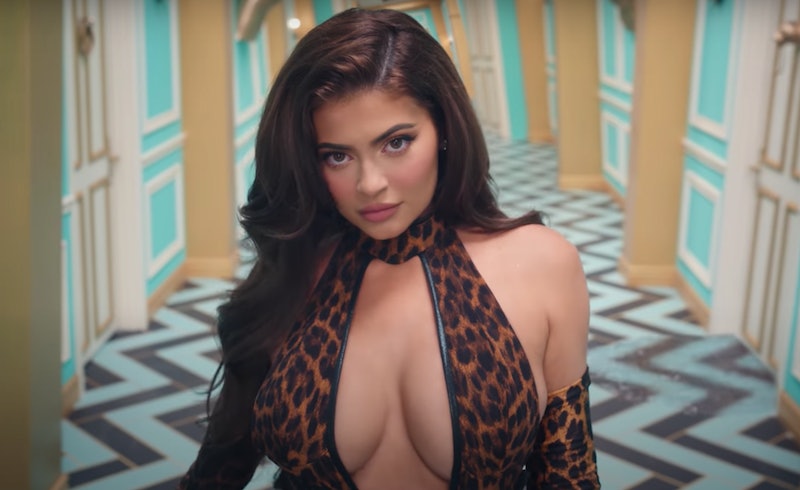 The video directed by Colin Tilley takes place in, among other settings, an opulent mansion with pastel teal walls (lined with golden butt sculptures, of course) and filled with many rooms. At around the one-minute mark, a cheetah-print clad Jenner makes her way through the halls as the music temporarily pauses for dramatic effect. After brief eye contact with a leopard in one of the rooms, Jenner disappears behind a closed door down the hall.

It’s a video filled with lots of splendor and bright, joyful visuals. Other standout details include the fountain statue of Cardi and Megan outside of the manor and the cheetah- and zebra-print rooms. Still, Jenner’s cameo came as a complete surprise, with Cardi and Megan’s fans maintaining that her appearance felt out of place among the Black women. However, the cameo might not be so random at all. For one thing: Jenner and Megan have been known to hang out from time to time.

And, as Cardi explained on Apple Music’s “New Music Daily” on Aug. 7, she and Meg wanted “a lot of different females” for the video and “not just female rappers.” From “models to influencers” and everybody in between, Cardi said she wanted a variety of women for the “very sexy” video. “These are the girls that I personally like," Cardi explained. "I really feel they are going to go mainstream… All the girls right here, there [are] different things that I like about them. That's why I said variety.”

Well, the variety has proven a bit controversial. A few Twitter users expressed their disappointment over the surprise cameo. Writer Roxane Gay, for one, maintained that “no one asked for that.”

Others, however, went straight for the memes — and one Twitter user even invoked Jenner’s viral “Rise and Shine” song.

Cardi, for her part, laughed off the criticism, even sharing one of the "Rise and Shine" memes on her Twitter page and tagging Jenner.

All surprise aside, "WAP" isn't exactly Jenner's music video debut. The Kylie Cosmetics mogul has appeared in Tyga's "Stimulated," Jaden Smith's "Blue Ocean," and, alongside sister Kendall Jenner, The Boy Band Project's "Find That Girl." Still, this might just be her most memed music video appearance yet.

More like this
Twitter Is In Awe Of Taylor Swift’s “Lavender Haze” Music Video
By Jake Viswanath
Brad Pitt Wants To Share The Spotlight With This Celeb In Shania Twain’s “That Don't Impress Me Much”
By Alyssa Lapid
Adam Levine & Behati Prinsloo Welcome Their Third Child Together
By Jake Viswanath
Harry Styles Is Performing At The 2023 Grammy Awards
By Jake Viswanath
Get Even More From Bustle — Sign Up For The Newsletter
From hair trends to relationship advice, our daily newsletter has everything you need to sound like a person who’s on TikTok, even if you aren’t.