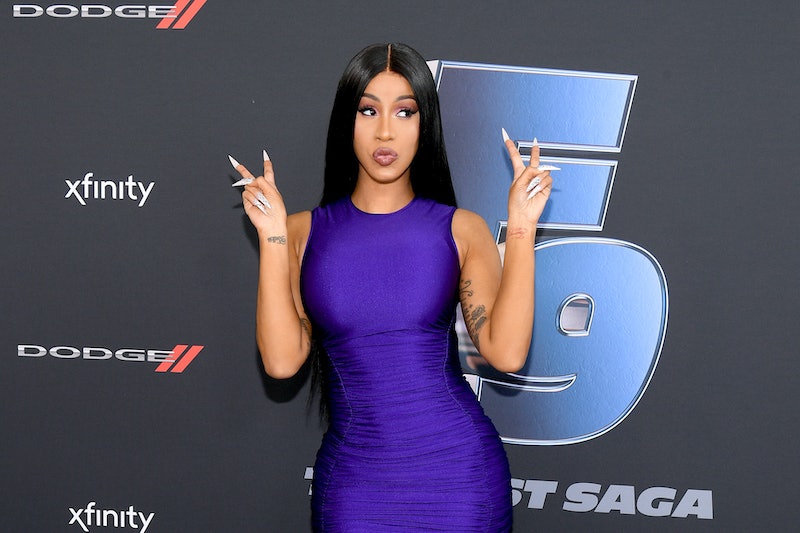 Donald Trump and Joe Biden participated in the first 2020 presidential debate on Tuesday, Sept. 29, and as aptly noted by CNN host Dana Bash, it was "a sh*tshow." However, one voice shined through the chaos, and it wasn't anyone actually on stage. Cardi B's presidential debate commentary basically spoke for everyone who was watching and made a pretty good case for why the rapper should moderate the next debate.

Throughout the first debate, Cardi posted a total of eleven videos on Instagram, most of which were live recordings of her TV screen as she gave her opinions. In the various clips, the rapper called out Trump for reportedly paying $750 in federal income tax in 2016 and argued that President Obama built the booming, pre-COVID economy that Trump has taken credit for. But, mainly, she seemed upset at how the debate was being run. In her first video, watching Trump interrupt Biden, she seemed to try to moderate from her couch. "Don't let him talk over you," she exclaimed. In a later video, she even accused moderator Chris Wallace of being on Trump's side of the debate, saying, "This moderator needs to be replaced right now."

If Cardi had replaced Wallace as moderator, one thing's for sure, she would not have let Trump insult the former Vice President's son Hunter Biden for his past substance abuse. ″I'm not even going to front, I really feel really bad when Trump came for Biden's son like that," she said in her final video of the night. Noting how many people in the U.S. turn to drugs for different reasons, including Trump's own supporters, she said, "For Trump to say that was such a low blow."

Cardi ended her video by asking Biden for one thing: please talk to her before the next debate, so she can prepare him on how to properly roast Trump. "I wish that f*cking Joe Biden would've spoken to me before the debate," she said. "I've got mad jokes under my belt."

While some might scratch their heads at the idea of Cardi B advising a presidential candidate before a debate, it's not really that far-fetched. The "WAP" rapper has continuously proven herself to be a passionate and educated voter. Cardi and Biden even interviewed each other for ELLE in August, discussing everything from the COVID-19 pandemic to what the rapper and her fanbase want from their president. "I want Black people to stop getting killed and no justice for it," she told Biden. "I'm tired of it. I'm sick of it." She also had some words for Trump at time time. "His mouth gets us in trouble so much," she said. "I don't want to be lied to — we're dealing with a pandemic right now, and I just want answers."

More like this
Man Meets Politics: ‘Boy Meets World’ Star Ben Savage Is Running For Congress
By Jake Viswanath
Noel Gallagher Joined The Nepo Baby Convo
By Darshita Goyal
The Real Reason Joey Essex Quit 'TOWIE'
By Catharina Cheung
Cruz Beckham Teased New Music With An Adorable Nod To Mom Victoria Beckham
By Stephanie Topacio Long
Get Even More From Bustle — Sign Up For The Newsletter
From hair trends to relationship advice, our daily newsletter has everything you need to sound like a person who’s on TikTok, even if you aren’t.