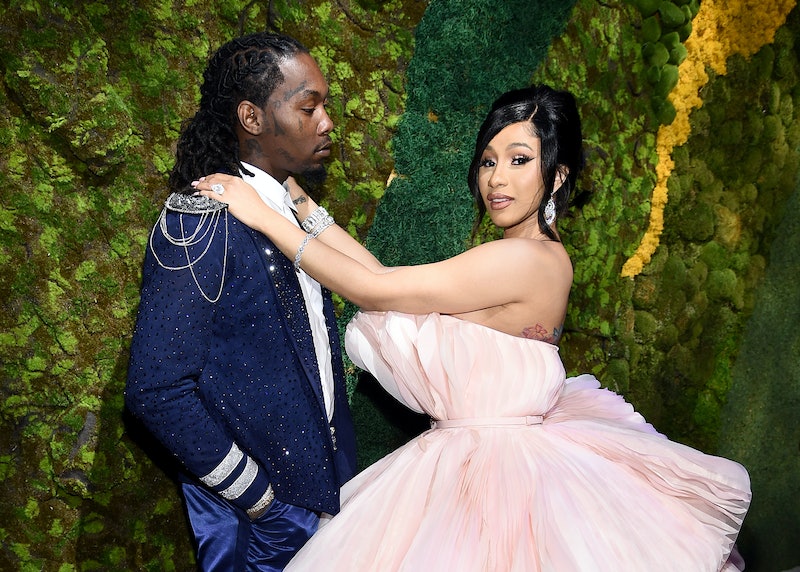 After years of on-and-off drama, cheating accusations, collabs, and one child together, Offset and Cardi B are reportedly getting divorced. The couple, who share 2-year-old daughter Kulture, have been together since early 2017, and they actually got married in September of that same year, though their union didn't become public knowledge until a year later. Though they've had their ups and downs before, including a brief split in early 2018, the duo seems to have called it quits for good this time, as Cardi reportedly filed for divorce from Offset in Georgia, per Hollywood Unlocked. Bustle reached out to reps for both Cardi and Offset, but did not receive an immediate response.

Cardi is reportedly petitioning for primary physical and legal custody of Kulture, and is seeking child support, per TMZ. The site also claimed that the court filings suggest the two rappers have been separated for a while, though the exact date of separation is unknown. A hearing is reportedly set for Nov. 4.

Though the cause for the split remains unknown, and neither Offset nor Cardi have commented on the news of the divorce filings, it seems that cheating was, once again, involved. People reported that Cardi filed the papers after her estranged husband cheated on her again, claiming their relationship was "irretrievably broken."

As previously noted, this isn't the first time Offset and Cardi have broken up or gone through a rough patch. In January of 2018, it was reported that Offset had cheated, causing Cardi to rethink their relationship. The two ended up weathering the storm, with Cardi writing on Twitter, "This sh*t happens to everyone and I be too, you too." Then, in December of that same year, after welcoming Kulture together, Cardi announced that the two had split. In a since deleted Instagram post, Cardi told fans that, though she and Offset were "really good friends" and "business partners," the two had gone their separate ways. "Things just haven't been working out between us for a long time and it's nobody's fault," she said at the time. "I guess we grew out of love." The two eventually reconciled after Offset made many public pleas for forgiveness.

Cardi recently explained her decision to get back together with Offset, telling Vogue in January, "Everybody has issues. I believe in forgiveness. I prayed on it. Me and my husband, we prayed on it." She continued, saying that they had come to a new understanding about their relationship. "For me, monogamy is the only way. I'll beat your ass if you cheat on me."