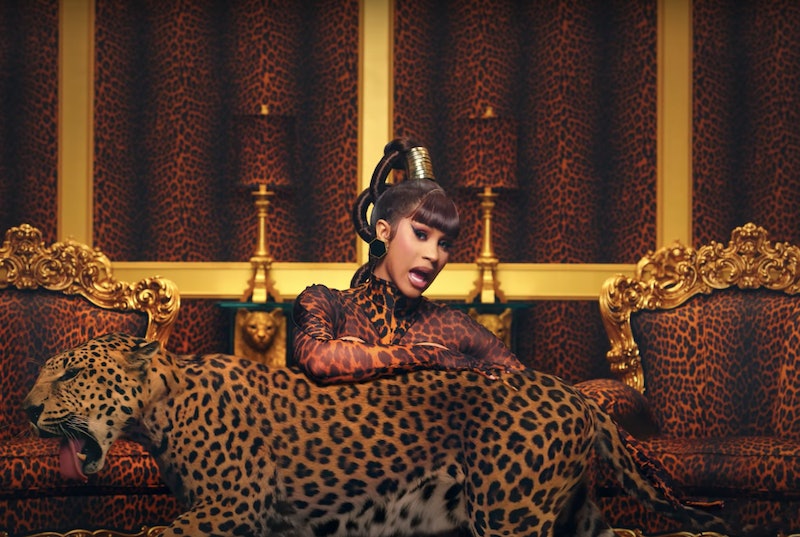 Cardi B had some choice words for the public figures who have criticized her newest music video. Shortly after the Big Cat Rescue founder critiqued her for featuring big cats in the "WAP" music video, Cardi B fired back at Carole Baskin's claims that she encouraged animal cruelty by referencing the conspiracy theory that the Tiger King star killed her late husband. (As seen in Cardi's previous tweets, she's a fan of the Netflix docuseries.) But if Baskin was hoping to get a rise out of the rapper, she's going to be disappointed.

After Cardi B and Megan Thee Stallion released the star-studded music video for "WAP" on August 7, Baskin told Billboard that the presence of tigers and leopards in the video "glamorizes" owning exotic pets and promotes animal cruelty. Now, in a new interview with i-D Magazine, Cardi B fired back at Baskin, in her signature outrageous fashion. "I’m not gonna engage with Carole Baskin on that," the rapper said when asked about the comments. “Like, that’s just ridiculous you know? Oh, Lord. Like, girl you killed your goddamn husband." Baskin has repeatedly denied the accusations that she was involved in the 1997 disappearance of her then-husband, Don Lewis.

Cardi also confirmed that the big cats in question were not present on the video's set, but were added into the shots digitally due to concerns over the cast and crew's safety. "We had to spend $100,000 dollars just on testing. Everybody on the shoot had to get tested for coronavirus," Cardi told the magazine. "We had a tiger and a leopard there, but we didn’t film with them in there because of safety and because of the pandemic. We spliced those scenes together.”

The fact that the animals were added in digitally won't be of much comfort to Baskin. "You have to pose a wildcat in front of a green screen to get that image and that doesn't happen in the wild," she told Billboard. "It can't happen in sanctuaries like ours where cats have plenty of room to avoid a green screen ... That tells me they probably dealt with one of the big cat pimps, who makes a living from beating, shocking and starving cats to make them stand on cue in front of a green screen in a studio. That's never good for the cat."

Baskin isn't the only one who has critiqued the "WAP" video in the week since its release; on August 9, Cardi B defended her decision to cast Kylie Jenner in the clip after social media users called out her presence, especially when compared to all of the Black musicians featured in the video. "Why did I put Kylie on my music video?" the rapper wrote in a series of now-deleted tweets. "She treated my sister and daughter so lovely at her kid bday party. Travis [Scott] and [Offset] are real close and Kris Jenner have giving me advice on certain things I ask for and her husband real cool with mine."

In her conversation with i-D, Cardi said that she was surprised by the response to the video. “I knew it was gonna have a big impact, I guess, because of me and Megan. But I didn’t know it was going to be so controversial," she explained. She also referenced the response from conservative commentators, who have slammed the song for its "vulgar" lyrics and declared Cardi and Megan to be bad role models for young women. "I never expected that, you know, conservatives and Republicans were going to be talking about the song," Cardi continued. "I didn’t think the song was as vulgar as they said it was, you know? Like, I’m so used to it. I’m such a freak that I didn’t think it would be a big deal."

Still, the rapper isn't bothered by all of the controversies surrounding "WAP" and its music video. “It doesn’t make me angry," she said. "It makes me happy. They keep talking and the numbers keep going up. At the end of the day, whatever they’re saying, the numbers speak for themselves.”