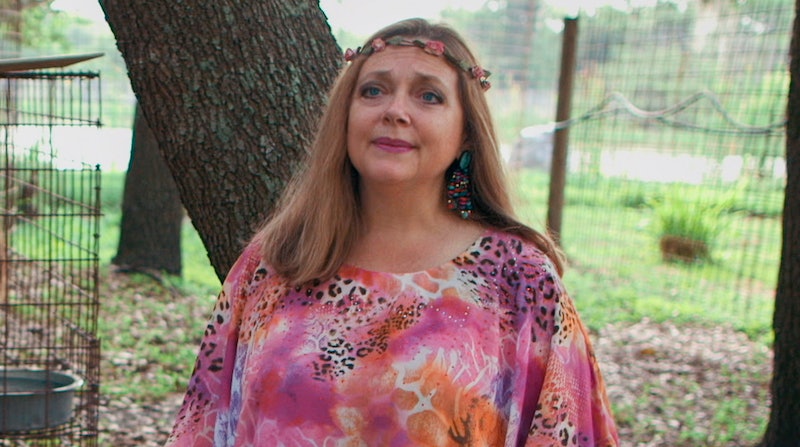 The Tiger King saga continues. The daughters of Don Lewis, the Tampa, Florida man who went missing in August 1997, have filed a lawsuit against Lewis’ former wife Carole Baskin and fellow Tiger King subject Kenny Farr. The family’s lawyer John M. Phillips said in a press conference on Aug. 10 that the lawsuit is not for money, but simply an attempt to depose Baskin and get her to provide, on the record, any information she may have about her husband’s disappearance, according to the Tampa Bay Times. Phillips said that Baskin would be “invited to the table” to provide electronic device data, diaries, and other investigative material related to Lewis’ disappearance. Bustle reached out to Baskin for comment, but did not receive an immediate response.

Lewis’ case became the subject of renewed interest after the release of the Netflix docuseries Tiger King: Murder, Mayhem and Madness. The series primarily focused on eccentric zoo owner Joe Exotic (real name Joseph Maldonado-Passage) and his feud with Baskin, the CEO of Big Cat Rescue, but it also briefly touched on Lewis’ disappearance. Lewis, who ran Big Cat Rescue with Baskin, vanished 23 years ago just before a scheduled trip to Costa Rica. He was declared legally dead in 2002. (Exotic famously accused his nemesis — without proof — of killing her husband and feeding him to tigers, and Baskin denied the allegations.)

In the wake of Tiger King’s debut in March, however, the Hillsborough County Sheriff's Office reopened the case and asked the public for tips. Now, along with the lawsuit against Baskin and Farr, Lewis’ family has launched an independent investigation into the disappearance — and will also offer a $10,000 reward to those who help solve the case.

Lewis’ daughter Gale Rathbone cited the success of Tiger King as the source of her renewed hope for answers. “Amazingly, our little family tragedy has become your tragedy,” Rathbone said at the press conference announcing the lawsuit and investigation, per Tampa Bay Times. “For 23 years I have gone to bed at night knowing the only chance I have of seeing him again is in my dreams. Hopefully one day soon we, and you, will know the truth.”

Baskin said she wouldn't comment on the lawsuit in an email sent to AP after the press conference. “It’s been my policy not to discuss pending litigation until it’s been resolved,” Baskin wrote. “I had told some news outlets that I thought the press conference on Aug. 10 was just a publicity stunt, but at that time was not aware there would be pending litigation.” She has, however, repeatedly denied any involvement in her husband's disappearance and presumed death.