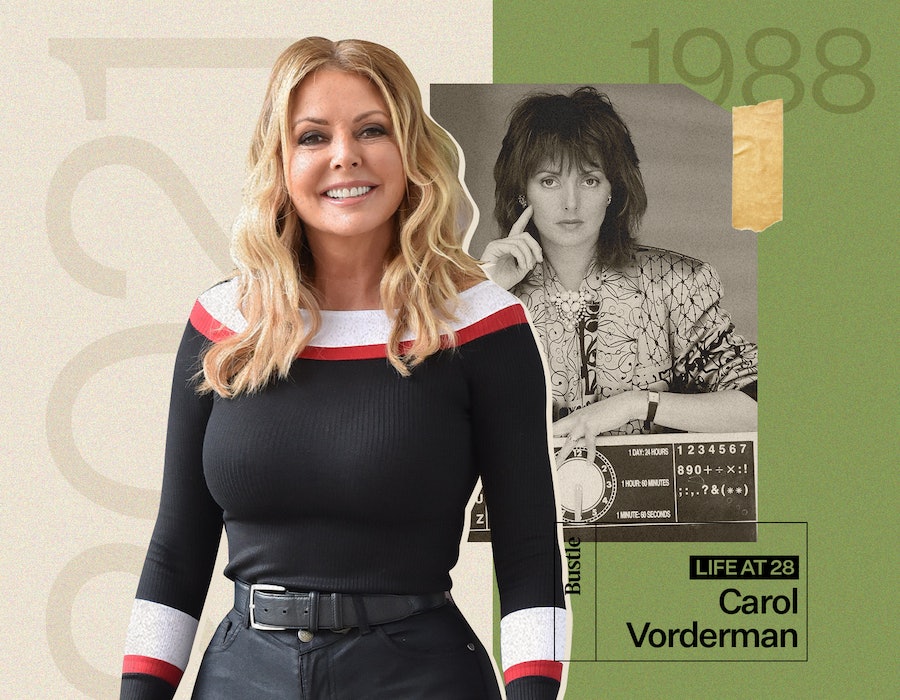 In Bustle’s Q&A series 28, successful women describe exactly what their lives looked like when they were 28 — what they wore, where they worked, what stressed them out most, and what, if anything, they would do differently. This time, Carol Vorderman talks about her years on Countdown, and her passion to teach the nation.

By 1988, at the age of just 28, Carol Vorderman had established herself as one of the most recognisable – and glamorous – faces of maths on TV, heading up Channel 4’s Countdown. Then in 2008, 26 years and almost 5,000 episodes later, she handed over the baton to fellow presenter Rachel Riley. Since, she’s been a regular on Loose Women, was awarded an MBE, and learnt how to fly planes. However, the now 60-year-old says: “The one thing that is my passion above all is education, and opening doors for young people.”

Born in Wales, Vorderman moved to Leeds with her family after graduating from the University of Cambridge, and has ensured education remained a priority throughout her life. Alongside her TV work, she has produced innumerable STEM (Science, Technology, Engineering, and Maths) programmes to help children in schools. In fact, if you were at school in the last two decades, it’s very likely that Vorderman contributed to your learnings.

Vorderman has been such a TV presence for so long, many might not be aware of her impact on the UK education system. But, when I speak to her, I’m reminded that she pretty much got me and my classmates through primary school maths and sciences.

Below, Vorderman reflects on her time on one of the UK’s most popular game shows, and shares career advice for young women today.

Take me back to when you were 28. You’d already been on Countdown for six years, but what did your life look like then, and how did you feel about the future?

I’d been married and divorced by the time I was 28. We’d met and got engaged within three weeks, because I was on the rebound from the first love of my life. It was my only ever rebound, and the only time I’d ever been dumped. It was a bad time, but we were babies.

28 was the first time in my life where I had a little bit of money, too. Things were going nicely, and I loved living in Leeds. Then I met my second husband, Paddy, at a friend's wedding in London. I was beginning to think about settling down, and having a family.

I wanted a roof over my head. I’d grown up being dragged from pillar to post, and moving home all of the time, so I wanted security. I craved owning a house with a roof that no one could take me away from.

Talk me through how you ended up getting the job on Countdown?

I graduated from Cambridge at 20 years old, and at the time my mum was living in a student house. I had been up to Leeds a few times because I had a boyfriend there, so I found a house, organised a joint mortgage, and moved my mum in with me. She was besotted with newspapers, and in the summer of 1982 she saw an advertisement for a new show on Channel 4. She said I should go for it; I said “don’t be daft mother”.

Unknown to me, she wrote a letter to the studio pretending to be me, put a copy of my graduation photo in, and forged my signature. After she sent it, she told me what she’d done!

We then got a phone call from John Meade (one of the first producers of Countdown). He asked me to come to the studio a couple of days later, and as we sat in his office he played me some of the conundrums that were on the French version of the show. I’d completed the questions before he started the clock. I got given the job straight off the bat – I didn’t even step foot in a studio. It was the most weird process, we never thought we’d be making so many shows.

When did you first realise you had a real passion for maths?

I have a brother who is seven years older than me, and he was born with a cleft lip and palate. Surgery wasn’t what it is now, so he wouldn’t go out a lot. Mum had to work most evenings, so I became my brother’s chess partner, and he helped me with maths. He loved it too.

How did you deal with the fame that came with Countdown?

I developed a Countdown persona. The way I looked onscreen wasn’t how I looked off screen, normally I was quite funky. At the time I was a nightclub girl, I was always in the clubs, but that’s not how I portrayed myself on camera. It wasn’t like I was two people, but Countdown was just a small part of who I was.

I was working in another full-time job originally, and it wasn’t until the first 40 shows went out that I had to decide whether I’d do it full time. I didn’t want to get to 30, and wonder what would have happened with Countdown if I didn’t give it a chance. It was a leap of faith in myself. When you come from nothing, you have nothing to lose.

In my twenties I worked a lot on science programmes and construction sites, and that’s what I loved. I’m not a red-carpet person, really. It’s okay, but I don’t get any thrill from it.

What’s your take on how the pandemic has impacted children’s learning in the UK?

The last year has been a trauma for children. If your school isn’t great, or you don’t have the support at home, it can be really hard. I wanted to give back, and open doors for young people. Suddenly in lockdown we were teaching half a million children [with online learning platform, The Maths Factor]. It’s made a tremendous difference to so many families.

Throughout my career, education is what’s made a difference to me, and I’ve always had a sense of giving back. I love using my brain, I love teaching, learning, and laughing.

Finally, what career advice would you give young women today?

Everyone talks about having it all, and young people are exposed to people seemingly having it all. When I was growing up you didn’t see that. The only people you saw were the people on your street. You didn’t know what other people were doing. The comparison is endless and constant now, I think that’s a problem.

In your twenties, when you’re doing things for the first time or the first few times, and you have those big leaps, just enjoy them. Don’t race onto the next thing. I remember seeing myself on TV for the first time, and the first time I stepped foot into a studio. Ask me what it was like on my 7,000th time, and I will probably say it was nice, but it’s not the same thrill. Enjoy everything, and don’t rush.