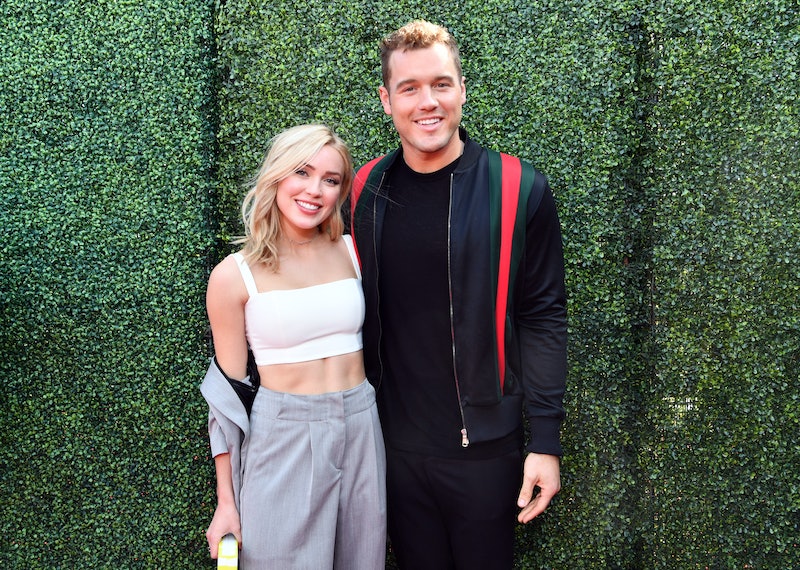 A former Bachelor fairytale is reaching some alarming new lows. Cassie Randolph reportedly obtained a temporary restraining order against Colton Underwood, according to court documents filed on Sept. 14, after alleging the former Bachelor harassed her since their breakup in May. Bustle has reached out to representatives for Cassie and Colton for comment, but did not receive an immediate response.

Cassie and Colton met on The Bachelor, but their relationship in the real world started after Colton famously jumped a fence in frustration when Cassie broke up with him on the show. He ultimately broke up with his other final contestants to pursue her exclusively and the two dated for just over a year before publicly announcing their breakup in May. Though they initially said their split was amicable, Cassie reportedly filed a request for the restraining order on Sept. 11, which was granted on Sept. 14. According to the filing obtained by Entertainment Tonight, Colton must stay at least 100 yards away from Cassie, her home, workplace, vehicle, and school. He is prohibited from contacting her in any way, and must not harass, threaten, or attack her. A hearing for the case, which is listed as "domestic violence prevention without minor children," is set for Oct. 6, which is when the temporary order is set to expire.

While neither Cassie nor Colton have publicly commented on the ordeal, E! News reported that Cassie's filing contains detailed allegations against Colton, with the "date of abuse" listed as June 2020. "Since their breakup, Mr. Underwood has been stalking and harassing Ms. Randolph," a statement included in the filing reads. "He has sent her unsettling text messages, repeatedly called her, and placed a tracking device on her vehicle to track her whereabouts."

According to the documents, Colton was repeatedly spotted near Cassie's apartment and her family's home in Huntington Beach, California, by friends, neighbors, and family members. "Mr. Underwood admitted to his roommate and his roommate's girlfriend (who is also Ms. Randolph's friend) that he goes on multiple walks a day to Ms. Randolph's apartment building," the filing claims.

The situation came to a head between Aug. 16 and Aug. 19, when Cassie claimed she discovered a tracking device taped to her car. She also said that during that time period, Colton allegedly used "alias phone numbers" to anonymously send harassing texts to her, her friends, and even to himself, "pretending to also be" a victim of an anonymous stalker. The filing reportedly states that Colton "admitted that he was the one who put the tracker on her car and had been the one sending text messages to her, her friends and himself, under the alias phone numbers described above." Colton declined to comment on the allegations to E! News, citing them as a "legal matter."