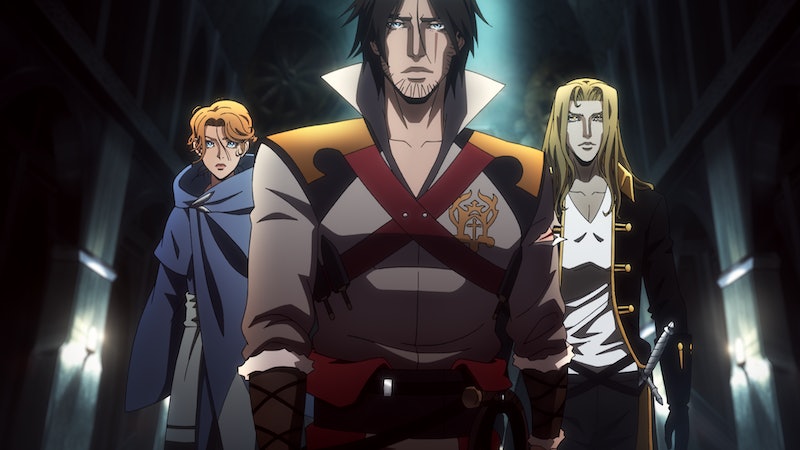 After Castlevania Season 4 airs on May 13, Trevor Belmont’s battle against Count Dracula and his minions will officially be over. Based on a Konami video game by the same name, Castlevania was Netflix’s first original anime series, and it quickly grew to be one of its most popular shows. But Netflix confirmed that Castlevania won’t return after Season 4 in an April 16 tweet. “The goal of the fourth season is really to come to and give our characters’ stories a proper ending,” producer Kevin Kolde told Monsters & Critics. He then teased the possibility of a spinoff, saying that “in a lot of ways” the finale is also “a proper beginning.”

This hint lines up with an April report from Deadline, which suggested that while Castlevania is ending, the story could continue. “I hear Netflix is eyeing a new series set in the same Castlevania universe with an entirely new cast of characters,” Nellie Andreeva wrote.

In regards to the rumors, Kolde told Monsters & Critics that “there’s not much to say about that at this point” but they are “definitely looking at continuing the Castlevania universe.” He also added that the creative team would be different.

Netflix didn’t give any official reason for why the original Castlevania series is ending, but the series’ end comes as controversy surrounding the show’s original creator and head writer Warren Ellis has hit a fever pitch. In June 2020, when Ellis was finishing the scripts for Castlevania Season 4, women came forward with multiple allegations of grooming against Ellis on Twitter. What started as a private chat became the website So Many Of Us, which launched in July 2020. To date, more than 60 women and nonbinary individuals have accused Ellis of sexual misconduct on the site.

“Warren Ellis, a New York Times best-selling author, comics writer, public speaker, screenwriter, and producer, has devised and continues to follow a pattern of emotionally abusive behavior documented across more than two decades,” the website reads. “From our accounts, and the others who have come forward, there is clear evidence of Warren Ellis using his celebrity status and vast public platform as catalyst and shield to manipulate and groom targets under false pretenses, and to coerce private pornography and sexual exchanges.”

Ellis responded to the initial allegations on Twitter in a (now-deleted) June 2020 tweet, per The Hollywood Reporter. “While I’ve made many bad choices in my past, and I’ve said a lot of wrong things, let me be clear, I have never consciously coerced, manipulated, or abused anyone, nor have I ever assaulted anybody,” he wrote. “But I was ignorant of where I was operating from at a time. I should have been clear and for that I accept 100% responsibility. I have always tried to aid and support women in their lives and careers, but I have hurt many people that I had no intention of hurting. I am culpable. I take responsibility for my mistakes. I will do better and for that, I apologize.”

As So Many Of Us notes, sexual misconduct is a persistent problem in the comic book and film industries, so their aim is to dismantle the culture that emboldens men like Ellis. “To be clear, our aim is not to see Warren Ellis punished. We are here to look forward. We believe it is important to amplify awareness of a pattern to change the culture of complicity,” the website reads. “We tell these stories so that anyone can recognize the dangerous nature of this type of behavior and protect themselves and others.”

According to Deadline, it seems that Netflix has quietly cut ties with Ellis since the accusations. “Last summer, Ellis, who at the time had finished the scripts for Season 4, faced sexual misconduct allegations, which he firmly denied,” Andreeva wrote. “He has had no further involvement in Castlevania, and I hear he also has not been part of the conversations about a potential new show, which likely won’t include him as a creative auspice.”