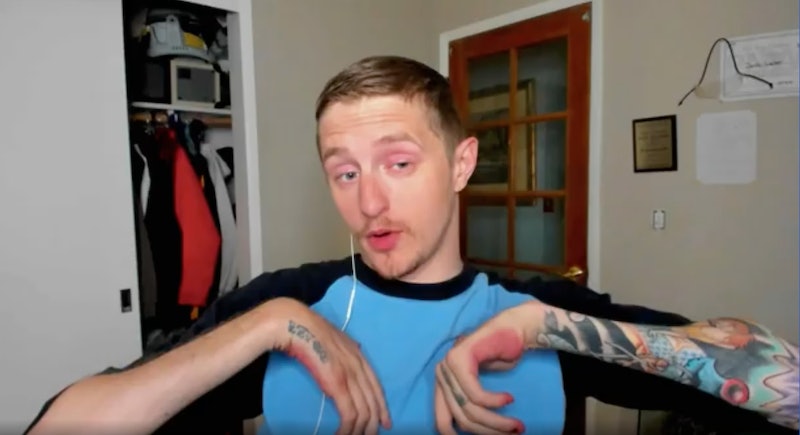 After a week-long break, Catfish returned on Wednesday to help Jay meet his new friend, Anna. They'd only been talking for a few months when Jay began to grow suspicious: Anna wouldn't video chat, and neither of the two phone numbers she gave him worked when he tried to call. They'd only ever talked through Facebook Messenger.

Jay wasn't sure what was going on, but he knew something wasn't right. So he passed on logs of their conversations to Nev and Kamie and hoped for the best. The co-hosts didn't find much — no profile image matches or weird Facebook posts. But they did find it odd that at one point, Anna asked Jay, an editor, to make an acting demo reel for a friend of hers. "Is she trying to get him to edit videos or have a relationship?" Kamie asked.

The deeper they dug, the more likely Kamie's suspicions seemed to be right. So they decided to straight up ask Anna to come clean, and a man named Mars Carbonell — the "friend" who needed the demo reel — appeared on Zoom. He admitted to catfishing Jay and at first, said he just wanted editing help. But that excuse didn't add up because he didn't even know Jay was an editor when he sent him a friend request. Mars eventually admitted that he just liked talking to Jay, but after learning the truth, Jay was no longer interested.

On the show, Jay mentioned that he's not much of a social media guy, so it's unclear what he's been up to since filming ended. Mars, on the other hand, was active on Instagram. But the handle displayed for him during the episode no longer exists, and neither does the IMDb profile that Nev browsed. It appears that since filming, Mars has changed his name online to Andre Carbonell. There's a private Instagram under the name with the same bio from the Mars page as well as an IMDb page with movie roles that match the ones Mars played.

It's unclear why he decided to change his display name, or if either profiles are real. But his Facebook (also under the name Andre) shows he's a working actor in Las Vegas. On Oct. 24, he shared a memory from working on set of The Walking Dead. Hopefully if he needs another video editor in the future, he won't feel the need to catfish them.