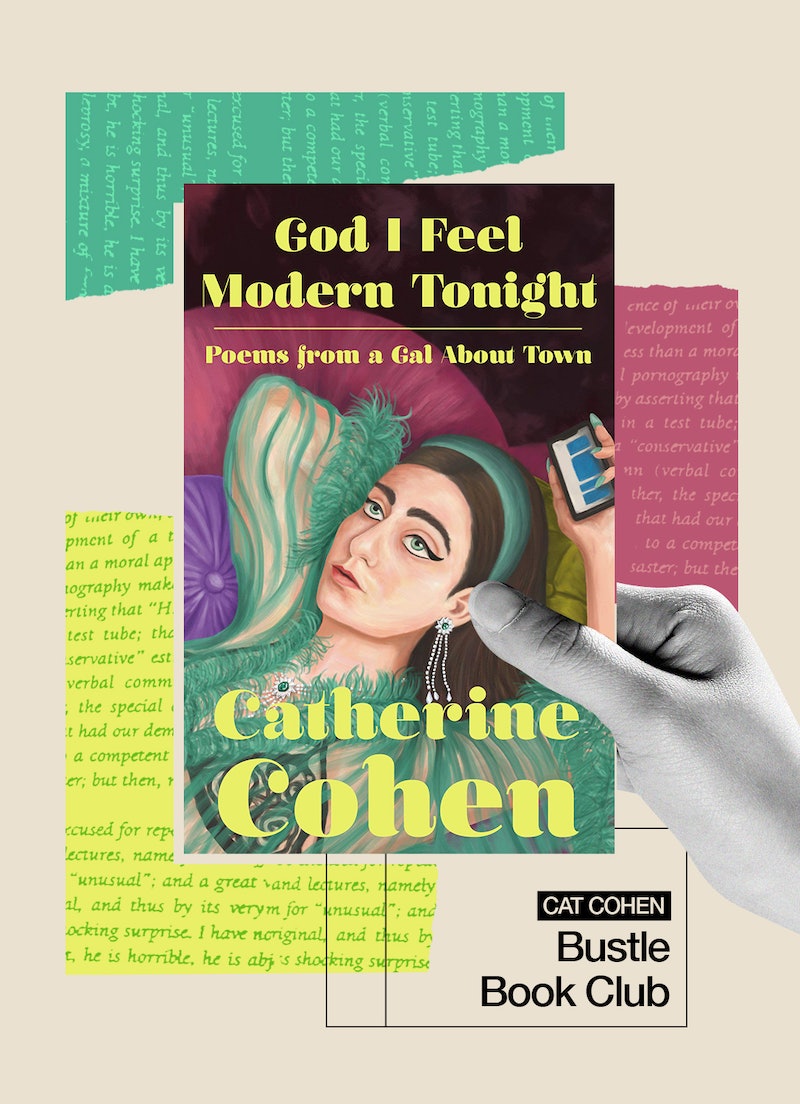 Comedian Catherine Cohen first fell in love with poetry as a moody teen. "In English class, whenever we'd talk about The Romantics, I'd be like, 'Yes, more, more,'" she tells Bustle. "I just love sobbing about my feelings on the floor of the bathroom, and poetry seemed like it was for people who sob on the floor of the bathroom when they're in high school and beyond." Though she found solace in the words of Romantic era poets like William Blake, John Keats, and William Wordsworth, Cohen's first attempts at writing her own poems were "embarrassing." (Her words, not ours.) "They were all just like, 'Tonight, the sun isn't shining, but the moon is in your heart,'" she says with a laugh.

For a long time Cohen, 29, wrote solely in the realm of comedy. She co-founded the humor podcast Seek Treatment, launched a weekly cabaret show in New York City, and appeared on popular shows like High Maintenance and Broad City. But in her downtime, Cohen still found herself gravitating towards poetry. "I started reading some more contemporary poetry that I felt gave me permission to talk like a person actually speaks. So I started writing things that just felt more immediate," she says. "I remember sitting at a cafe with my boyfriend and being like, 'Oh, I'm just going to write a poem about being stressed that I might have a yeast infection,' because that's kind of what's going on with me, you know?"

Cohen's debut poetry collection, God I Feel Modern Tonight, is full of short, snappy takes on everything from crumming (the act of crying while you come), to Mary-Kate and Ashley Olsen, to, of course, yeast infections. The poems are comprised of the material you'd find deep on your Notes app, or in the depths of your group chat with your most salacious girlfriends — and for Cohen, that's exactly the point. "I'm always looking to read something that seems very personal or intimate," she says. "So I just feel like the more honest I can be about my life, the more people are going to be like, 'Oh, that feels really true.'"

Below, Cohen reflects on lo-fi hip hop, eating raw garlic, and her love of Sheila Heti.

When I'm depressed in my apartment feeling like nothing's going my way, I just want to read stories about women who have been down in the f*cking dumps [to see] how they picked themselves up. Because I'm like, "Well, I think of them as having it all. So what's their story?" I like people like Maggie Nelson and Sheila Heti, just women who are so vulnerable in the way they write, but are so strong. I remember when I read How Should a Person Be a few years ago and Heti says something like, "Who cares what people say? What people say has no effect on your heart." And I was just like, "F*ck yes. It doesn't matter what you tell me, the way I feel is how I feel and nothing will change that."

On not having a writing routine:

I would pay like $10 million to know how to have any kind of routine. Basically when [inspiration] comes, it comes. And when it doesn't, it doesn't. I get a lot of amazing ideas between like 4:00 AM and 8:00 AM as I'm lying in bed and can't fall back to sleep because I've had like three glasses of wine. If I have the energy to reach over and put something in my Notes app, I'm so proud of myself.

The poems in the book were written so sporadically. I'm definitely not someone who's like, "I write every day and wherever I go I carry a notepad and I jot down interesting things." I usually just spit a bunch of sh*t out at once and kind of move it around. I rarely edit or change anything, or go back and look at it.

On the three drinks she always has at her desk:

I'm psycho about water. I'm always insanely hydrated. Evian's my favorite water. No offense to Fiji, love that girl too. But obviously I try and use the tap and I'll drink it out of a big water bottle. I'll also have black coffee, hot. It doesn't have to be fancy because I can't tell if coffee's good or bad. I don't have that palate. Also, I keep drinking it when it's like ice cold, as the day goes on. But I can't really have more than a cup or I'll go cuckoo la choochoo. Then I'm obsessed with Diet Coke because it's amazing.

On her love of lo-fi hip hop:

I'm obsessed with the YouTube channel lofi hip hop because I love having music on, but it can't have words. So [this channel is] just instrumental. It's kind of fuzzy and it sounds like a rainy day. I sometimes also write to rain sounds. I'm really obsessed with Headspace. I love their bedtime stories, and they do one called Cabin Downpour that's just rain sounds for like 500 minutes. I like writing to that because it feels really cozy and romantic to be like, "I have to write because it's raining and I can't go outside!"

On her pre-show ritual:

When I have shows and stuff coming up, which obviously I don't right now, I'll drink these horrific ginger, garlic, orange, oil of oregano mixtures to make sure I don't get sick. I just chug that sh*t and eat raw garlic.

More like this
This Episode 6 Moment Foreshadows Viserys' Fate On 'House Of The Dragon'
By Grace Wehniainen
Ling Ma Is Back — This Time, With Yetis
By Kate Dwyer
What Is A "Hot Girl Book" & Why Is Everyone Talking About Them?
By Samantha Leach
10 Must-Read New Books Out This Week
By K.W. Colyard
Get Even More From Bustle — Sign Up For The Newsletter