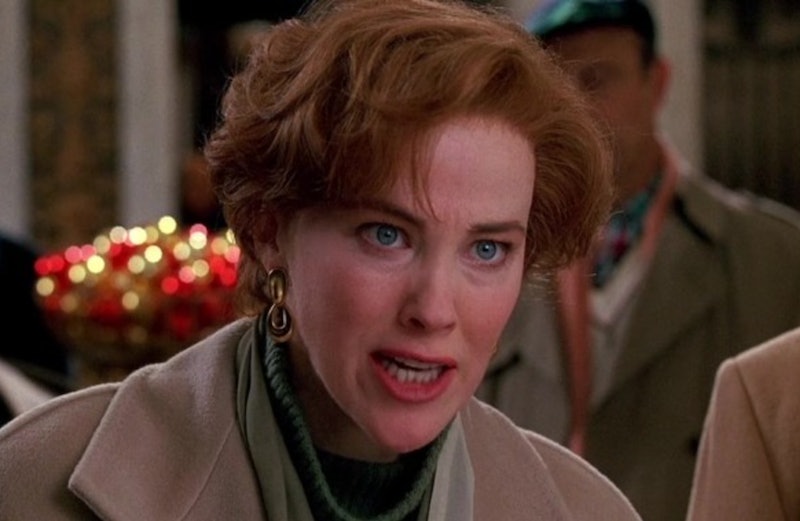 Emmy winner and national treasure Catherine O'Hara recreated a classic Home Alone 2 scene just in time for the holidays. Long before starring as Moira Rose on Schitt's Creek, O'Hara played Kevin McCallister's (Macaulay Culkin) mom in the 1990 comedy Home Alone and its 1992 sequel, Home Alone 2: Lost in New York. And in celebration of the Christmas film franchise's 30th anniversary, the actor brought back the infamous scene where she screams "Kevin!" and faints at the airport.

The McCallister matriarch shared a TikTok video of her homage, which was reenacted to a tee. In the original scene, O'Hara's character realizes that her youngest son has been separated from the family once again after arriving in Florida for a vacation. The reenactment comes after Schitt's Creek’s Instagram account shared tweets from confused fans who only just realized that O'Hara also starred in the Christmas classic.

"I did NOT realize the mom in Home Alone was the same mom from Schitt's Creek," one of the tweets said. "I need to sit down." The remaining social media posts included in the slideshow echoed that same sentiment, with another fan posting that they "still can't believe" Moira Rose and Kate McCallister were played by the same person.

While her stint as Kate was a surprise to some, O’Hara told InStyle in January 2018 that the iconic role is the one she gets recognized for the most. "From November through December, 'tis the season for Home Alone," she said. She also shared an anecdote about a reunion with Culkin. "I ran into Macaulay once and he said, 'Mom!' and I said, 'Baby!' He looked great and was doing well, and I was happy to see him," she recalled.

Like every other '90s classic, Home Alone will soon get the reboot treatment on Disney+ — but not everyone is thrilled about it. Home Alone director Chris Columbus, who is not involved in the reboot, called it a "waste of time" in an interview with Insider last month. "Nobody got in touch with me about it," he said. "... What's the point? I'm a firm believer that you don't remake films that have had the longevity of Home Alone. You're not going to create lightning in a bottle again. It's just not going to happen."

More like this
Jennifer Coolidge Just Said The Most Controversial Thing About Legally Blonde’s “Bend & Snap”
By Maxine Harrison
Before 'Bullet Train,' Revisit These Brad Pitt 'Fight Club' Premiere Photos From 1999
By Grace Wehniainen
Jennifer Coolidge Needs 'Legally Blonde 3' To Happen So She Stops Getting Hot Dog Jokes
By Jake Viswanath
Revisit 1992’s 'A League Of Their Own Cast' Photos After The New TV Series
By Grace Wehniainen
Get Even More From Bustle — Sign Up For The Newsletter