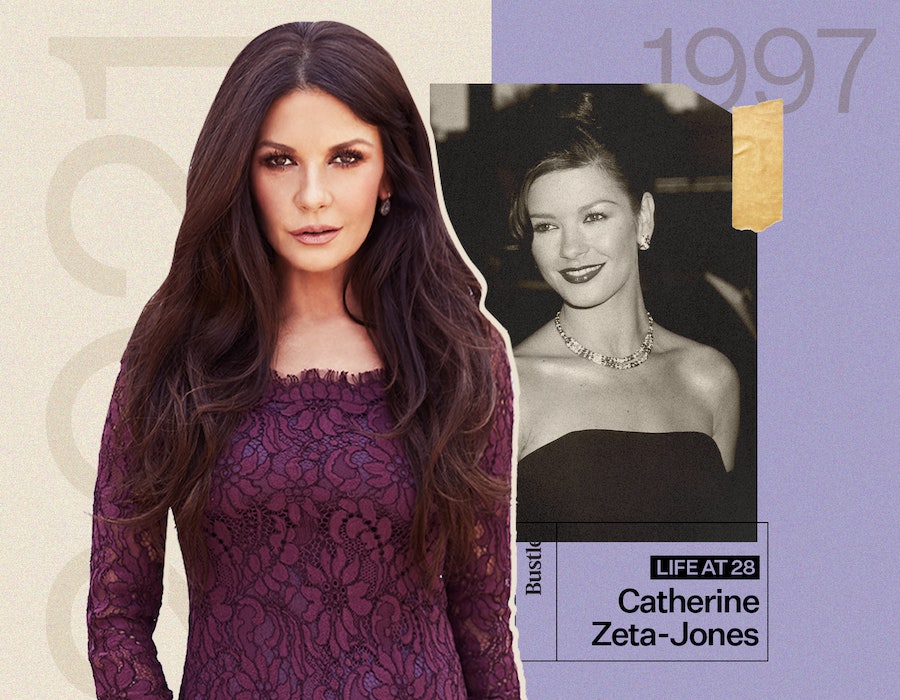 In Bustle’s Q&A series 28, successful women describe exactly what their lives looked like when they were 28 — what they wore, where they worked, what stressed them out most, and what, if anything, they would do differently. This time, Catherine Zeta-Jones — who recently launched a Casa Zeta-Jones coffee line — discusses the year she made Zorro and met her husband.

In 1997, Catherine Zeta-Jones sold her house in London to come to Hollywood. She’d been granted a six-month work visa for a single scene of work at Universal Studios, but the 28-year-old was resolved to make the most of the plane fare. “That was my Willy Wonka golden ticket,” she says. “I knew that I could legally be in America and audition.”

At the time, Zeta-Jones was already famous in the U.K. for playing Mariette — “she was like a 1950s pin-up” — on the hit series The Darling Buds of May. But the tabloid coverage that followed — “who I was dating, where I was eating, what I was wearing” — didn’t befit the serious actor she was working to become. “I was going toward being a 1990 pin-up,” she says ruefully. In the U.S., she could start again.

Below, Zeta-Jones, 51, talks about her decision to trade U.K. fame for a shot at Hollywood, falling in love with an established actor 25 years her senior, and her yearning to belong.

It was life-changing — a lot of things happened that are synonymous with what turned out to be my life today. I was 28 when I did Zorro. My husband saw Zorro, wanted to meet me. Cut to I’m married for 20 years, two kids.

You were already experiencing such success as an actor in the U.K. when you decided to come to America.

Moving to the States and meeting new people and learning how to drive at the other side of the road and renting my own little apartment and getting an agent — it was all new. And I remember feeling very present. It was humbling to be all of a sudden unknown again, just turning up and auditioning for things. And then getting cast in Entrapment and getting to work with an idol of mine, Sean Connery. I think it was more of a coming-of-age than any other part of my life.

I was single when I came to the States. I was single, single, single until I met my husband. I was my own woman. I was ambitious in a good, healthy way. I was in a new country, forming good friendships that are still with me. I became part of an expat world of young actors. It was Russell Crowe, me, Salma Hayek. We used to hang out together, auditioning, going to studios for castings. It was a good time, I have to say.

When you were cast in Zorro were you aware this could be your big break?

No, all I knew is that I was in really, really good company. And I was with Antonio [Banderas], who had just come off [Robert] Rodriguez’s [Mexico Trilogy] films. He was as hot as a hot can be. And Anthony Hopkins hadn't long got the Oscar for Silence of the Lambs. Steven Spielberg was producing, and Martin Campbell, who just had success with James Bond, was directing. So for me, it was like, "How lucky can I get?" Then it was up to me to do what I needed to do. To make that mark.

Do you remember how good the reviews of you were? They called you “show-stopping,” “alluring,” “bold.” Do you remember what it felt like to have that validation at that age?

I don't read reviews, and I hardly ever watch anything I'm in. I think it's from years of being in the theater: the dreaded day after opening night. I have recurring nightmares of that. But I remember specifically, walking down the street in America, and overhearing people say — and this is verbatim, I'd never forget — "Oh, she's the chick from Zorro."

You left England to avoid becoming a celebrity, and it recreated itself here.

Did you have a definition of what it would look like to be successful?

When I'm working around great actors or when I'm working with great directors, that’s success. Success is not getting a reservation in a restaurant when nobody else can. I feel successful when I surround myself with great people and people accept me.

I came from Wales from a working class family. When I went to London, I remember — and I'm not putting London or Britain down in any way. I'm still British. I'm not American, I've never had an American passport — but coming from a working class background, with an accent that's definable of where I was educated, where I come from... When I went to London, I wasn't part of that intelligentsia, that RADA, that Royal Shakespeare Company. I was basically a hoofer — a tap dancer who could act and sing. “Where do you go to school?” I didn't go to college. I went to do a nine-month tour of The Pajama Game. And so for me, I have a bit of a psychological hang-up of being accepted.

To be talking to a president and acting in front of Steven Soderbergh, or Steven Spielberg... No matter what the outcome of those projects were, I just felt like I belonged. That was what happened in that 28 coming to America time. I was having meetings with Spielberg. I was on the set with Banderas and Tony Hopkins. Michael Douglas wanted to meet me for God's sake! It was, “Oh my God, is this what you call ‘made it’?” I don't know, but it certainly is a lot of fun.”

Your husband was already very famous and successful in the exact career you were pursuing, and he was older. Were you intimidated to meet him?

I was going to a film festival. He was promoting A Perfect Murder, and I was going to promote Zorro because it hadn't come out in Europe yet. I thought Michael Douglas wanted to meet me for work because I knew he was a producer as well as an actor.

I genuinely thought that because I was in work mode and I was going to a film festival, and that's where film deals are made. And people get introduced and things like that. Schmoozing, whatever you want to call it. And I thought he wanted to meet me for a job. So I never thought, "Oh my God, he wants to date me."

And then Tony [Hopkins] invited Michael for dinner before the premiere, early dinner and a drink after or something. And within hours of meeting me, he told me he wanted to father my children. So I presumed this was not for a job.

Did you think he was serious?

Well, I did say to him, "I've heard a lot about you, I've read a lot about you, and it's all true. Goodnight." But he sent me flowers in Scotland and we communicated for a year after just by the phone. Whenever I was in New York or he was in L.A., we'd have a dinner or something for a year. We became friends, I guess. And then it all took off one summer, and then that was it. Twenty years later, here we are.

You're still doing the same career you did at 28, and you're with the same man. What do you think is the biggest difference between who you are now and who you were when you were starting out?

Being a mother. Because everything I've just said to you went away when I became a mother. And the most important thing are my children. Everything else is a bonus in my life. After I had my children, it was mission accomplished.

Because it’s unlike a career, which you can get back, which you can have ups and downs in, which you can have a resurgence in. With children, you never get that time back. You won't. For me to be so hands-on and be so present in their lives is a personal choice and not being able to do other work things. But the time I spent with them is just indelible. I'll never get it back. I can always get a good role back. Something always comes around.