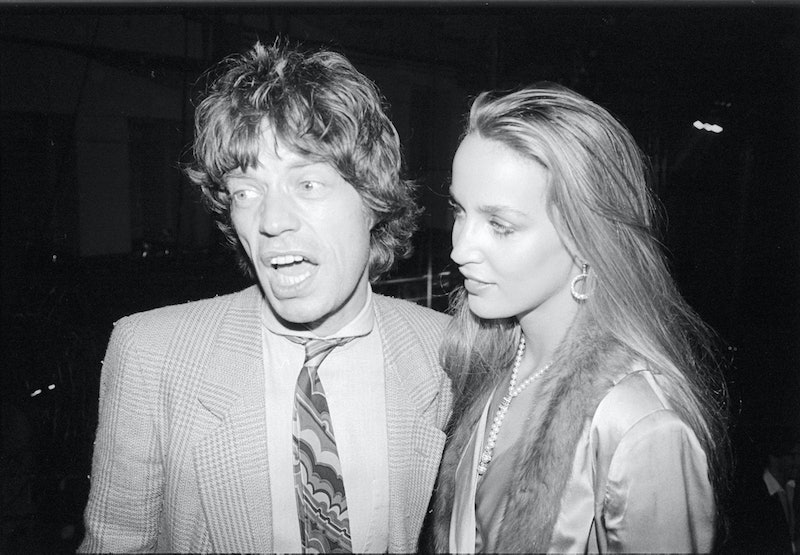 "On a good night, Studio 54 was the best party of your life," journalist Anthony Haden-Guest told the BBC in 2012, recalling New York City's iconic 54th Street nightclub. "Everything was happening at the same moment: there was the woman's movement [sic], the gay movement, ethnic movements of all kinds. The whole place was combustible with energy." It was also the epicenter of celebrity activity — everyone who was anyone was photographed there — and wild nightlife. It perfectly captured the spirit of the 1970s, from the bell-bottoms to the body glitter.

Only open for 33 months, Studio 54 became the stuff of legend. The candids taken behind the scenes at the world's most infamous nightclub have been burned into our cultural consciousness of the disco era. As the 23 photos of celebrities at Studio 54 below show, Liza Minnelli's daughter, Lorna Luft, put it best when she wrote in her 1999 memoir, Me and My Shadows, "Studio 54 made Halloween in Hollywood look like a PTA meeting."

Aside from the fact that all four are wearing Halston, what on earth could they possibly have in common?! Halston and his wild Studio 54 days feature in a miniseries on Netflix, but sadly it doesn’t recreate this iconic photo.

Minnelli & Halston, Likely Plotting Their Escape To The Latter's Nearby Townhouse

According to a Harper's Bazaar interview with Liza Minnelli, these two (along with Bianca Jagger) "spent so much time at Studio that on its first anniversary, the club tried to stage a performance." Minnelli said of the incident, "Oh, that? There was a platform set up, and they were playing one of my records, and Bianca was like, 'What the hell?' And I said, 'Just keep moving.'"

A birthday at Studio 54 was really something special — as was the case with Bianca Jagger’s big day: she celebrated hers with actual real-life doves (and naturally, Minnelli got in on the hijinks).

Bianca Jagger’s On A Horse!

Jagger then went on to absolutely up the ante by riding in on an actual stallion. This is probably one of the most iconic Studio 54 images in all of existence.

Another of the most iconic Studio 54 photos of all time: at a party for then-husband Prince Egon von Fürstenberg and his new book The Power Look, Diane stretches her long long legs up against a table against a banquette as hairstylist Ara Gallant (left) looks on.

Oh look, Barbra made it! Draped in fur and clutching flowers and her then-beau, Peters (“She was probably the love of my life,” he’s said of their infamous coupling), Streisand makes an entrance in the way only she knows how.

Warhol famously quipped that the key to the club's success was its formula: "a dictatorship at the door and a democracy on the dance floor."

Unclear as to why everyone was sitting on the floor, though.

Mick Jagger & Jerry Hall Hamming It Up For The Cameras

But then, having the cameras there was always a part of the fun.

While this is hardly the only photo of the singer raising hell with longtime friend Warhol, check out this 1977 Kenzo fashion show to get a sense of what the club really felt like with Jones in the room.

Who knew Elton John spent portions of the '70s not in feathers?

Scavullo was best known for his Cosmopolitan covers and celebrity portraits, many of which featured Studio 54 vets like Minnelli and Shields.

Remember what I said earlier about Liz Taylor and Betty Ford having nothing to talk about? I was wrong: In 1982, Taylor became one of the first celebrities to go public with her addiction struggles after checking herself into Ford's namesake rehabilitation clinic.

As the supermodel writes in her memoir, The Face That Changed It All, her one and only visit to Studio 54 lasted three days.

Cher In All Her Fedora-And-Suspenders Glory

As great as this shot is, it's almost nothing in comparison to the picture of Cher and then-boyfriend Gene Simmons (in full KISS regalia) sharing what appears to be a hotdog.

Cher & Howard Himelstein Dance It Out

There’s also this magnificent treasure from the same night: writer and producer Himelstein dipping Cher to show off her long, long, long legs as they dance.

Among the 300 guests at Stevie Wonder's party for his New York secretary, Mary Ann Cummings, were Steven Stills (of Crosby, Stills, Nash & Young) on drums, and behind them to the right, singer Stephanie Mills (who was the original "Dorothy" in The Wiz) and Teddy Pendergrass (the Harold Melvin and the Blue Notes' frontman).

Co-Stars Brooke Shields & George Burns At A Party For Their 1979 Comedy, Just You And Me, Kid

It was a film Rogert Ebert deemed "a charming disappointment."

Rubell At The Bar Beside Truman Capote

Studio 54 photos of Capote in later years would find him sleeping beside actress Gloria Swanson, his face obscured by his hat, and dancing with famed socialite C.Z. Guest.

Jones was, according to a 1978 issue of JET , an usher at the wedding of his cousin, Suzanne de Passe, who made Ross her maid of honor. (De Passe, a Vice President at Berry Gordy's Motown Records, was instrumental in signing the Jackson 5.) When Studio 54 closed two years later, on Feb. 4, 1980, Diana Ross was there to serenade owners Rubell and Schrager with one final song.

More like this
Britney Spears Shares & Deletes Photos Of Justin Timberlake From 22 Years Ago
By Jake Viswanath
Cruz Beckham Teased New Music With An Adorable Nod To Mom Victoria Beckham
By Stephanie Topacio Long
Mel B Thinks These Celebs Should Play Them In A Spice Girls Movie
By Alyssa Lapid
Hilary Duff Is “Optimistic” About A 'Lizzie McGuire' Reboot
By Alyssa Lapid
Get Even More From Bustle — Sign Up For The Newsletter
From hair trends to relationship advice, our daily newsletter has everything you need to sound like a person who’s on TikTok, even if you aren’t.

This article was originally published on Feb. 14, 2016