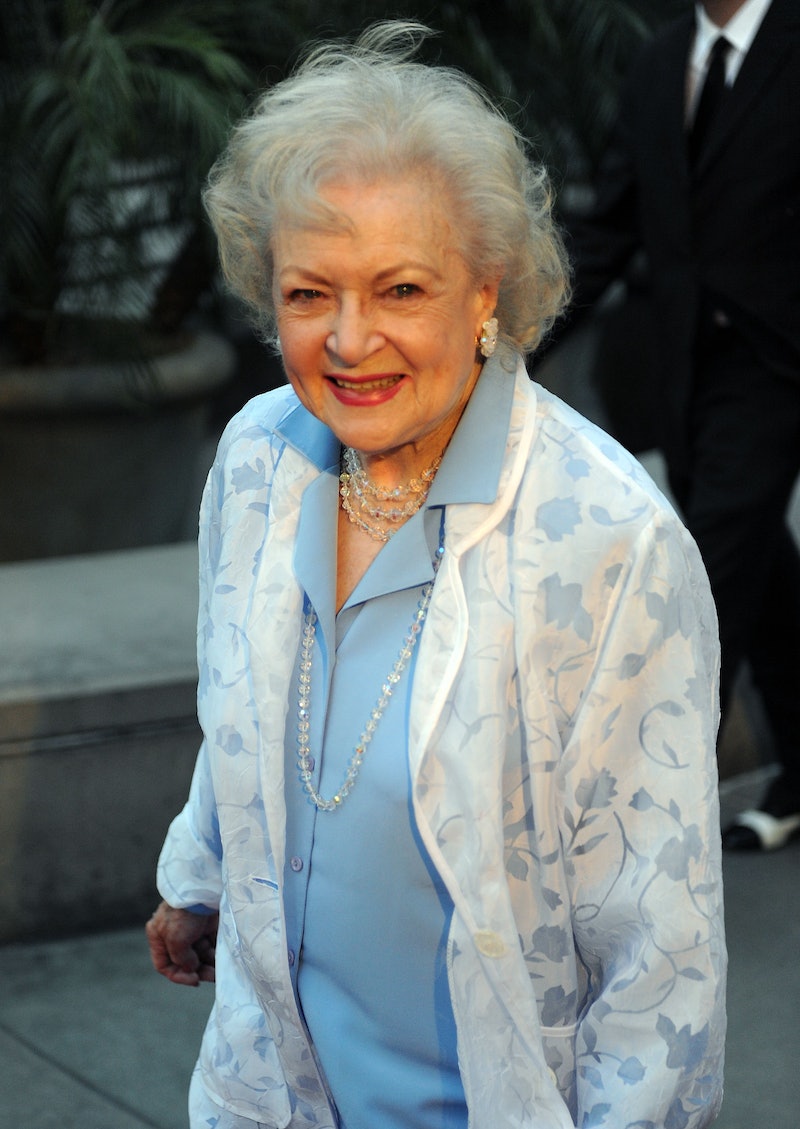 Before the clock ran out on 2021, there was a huge loss in the world of entertainment. Comedy and TV legend Betty White died at age 99 on the morning of New Year’s Eve. Her longtime friend and agent Jeff Witjas confirmed her death to People, noting that he’d thought she’d “live forever.” He noted that he’ll “miss her terribly” — a sentiment that was a common on social media, where many celebrities soon began honoring White’s life and legacy.

The eight-time Emmy winner and TV pioneer had been looking forward to her 100th birthday on Jan. 17. The event was meant to coincide with the release of a new documentary called Betty White: 100 Years Young – A Birthday Celebration. Still debuting on her birthday, the film will revisit highlights of the comedian’s legendary career, with commentary from stars like Ryan Reynolds, Tina Fey, Robert Redford, and Carol Burnett. White had been promoting it ahead of her birthday, and in a cover interview with People, she shared that she was “so lucky to be in such good health and feel so good at this age.”

In the wake of White’s death, Reynolds had more to say about his iconic friend and Proposal co-star. “The world looks different now,” he tweeted. “She was great at defying expectation. She managed to grow very old and somehow, not old enough. We’ll miss you, Betty. Now you know the secret.”

Many other celebrities also shared their tributes and memories. Comedian Seth Meyers, for example, recalled the time she hosted Saturday Night Live at the age of 88 and “stayed til the bitter end” of the post-show celebration. He also shared that she was “the only SNL host [he] ever saw get a standing ovation at the after party.”

Describing White as “our national treasure,” actor George Takei acknowledged the “great loss to us all.” He also called for people to “raise a toast to Betty” at midnight.

Singer Dionne Warwick recalled having “the pleasure of getting to know Betty White” and the “giggles” they shared.

Like Witjas, Oscar winner Viola Davis imagined White living forever. “You blew a huge hole in this world that will inspire generations,” she tweeted in part.

Young & Hungry vet Aimee Carrero shared a story from when White appeared in an episode of the show, and it involved some of the comedian’s risqué humor.

LeVar Burton mourned her death as the loss of “one of the best humans ever!”

For Avengers star Mark Ruffalo, the loss was another heartache in a rough 2021. “As if 2021 wasn’t bad enough. Rest In Peace, Queen Betty White,” he tweeted.

Ellen DeGeneres celebrated White’s “exceptional life” and shared her gratitude for the time they spent together.

Rosie O’Donnell tweeted her wishes for the legend to “rest well.”

In a Twitter thread, Steve Martin recalled meeting his fellow comedian for the first time and what it meant to him that she’d gone to see his act.

Pee-Wee Herman was also a huge fan of White, and he called her “one of the funniest people to ever work in comedy” as well as “enormously sweet and nice.”

Debbie Allen wrote that people will still celebrate White’s 100th birthday, as well as “the many decades of Joy” she gave the world.

Another actor who found White to be an inspiration was Kirstie Alley, who described her as “simply the best.”

Kerry Washington’s tribute included a thank you to White for her “bold and generous spirit.”

From Times Square, Dick Clark’s New Year’s Rockin’ Eve host Ryan Seacrest wrote that the people present and those “around the world are grieving the loss of Betty White.”

President Joe Biden even made sure to share his thoughts. “Betty White brought a smile to the lips of generations of Americans,” he tweeted. “She’s a cultural icon who will be sorely missed. Jill and I are thinking of her family and all those who loved her this New Year’s Eve.”

RIP to a true legend.

More like this
Here’s Everything Coming To & Leaving Netflix In February
By Jake Viswanath
Pamela Anderson’s Dating & Marriage History Could Be Its Own TV Series
By Jake Viswanath
What Is Pamela Anderson’s Net Worth? She Was Never Paid For Her Stolen Sex Tape
By Hugh McIntyre
New Details About Jeremy Renner's Snowplow Accident Reveal The Actor's Intentions
By Sam Ramsden
Get Even More From Bustle — Sign Up For The Newsletter
From hair trends to relationship advice, our daily newsletter has everything you need to sound like a person who’s on TikTok, even if you aren’t.