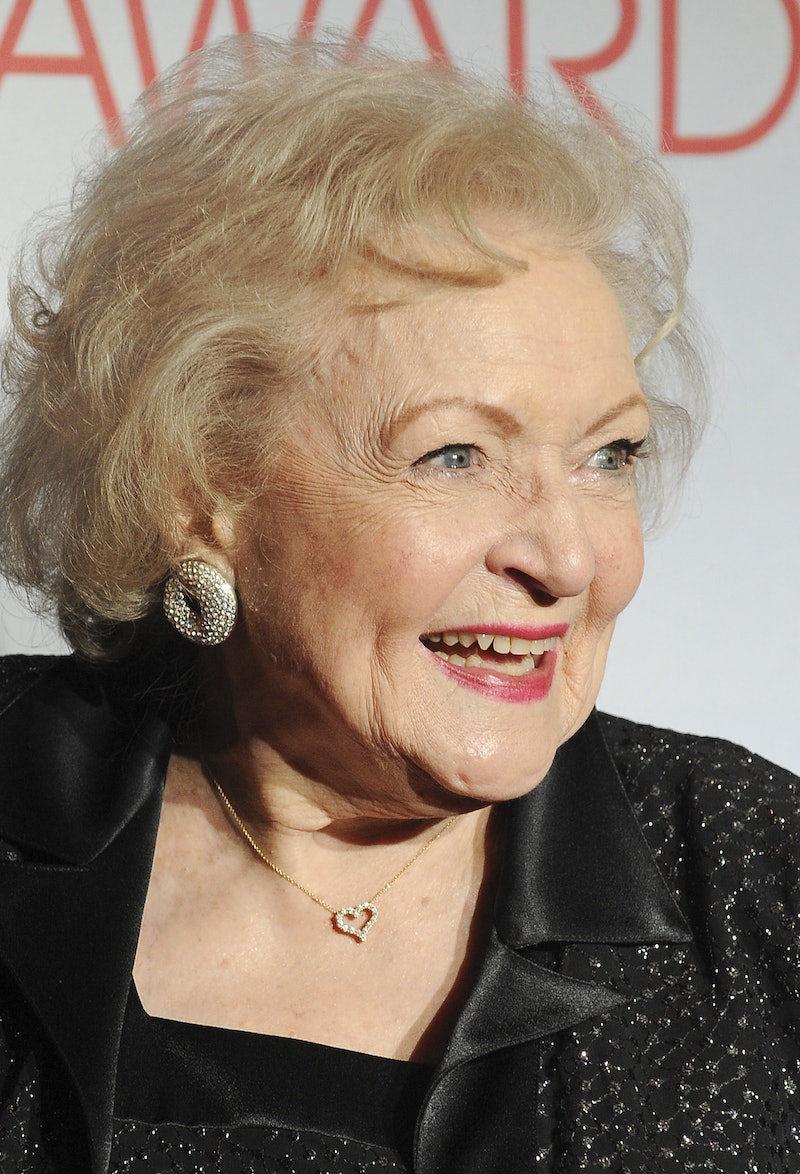 With only weeks to go until her 100th birthday, comedy trailblazer and icon Betty White has died. The eight-time Emmy-winning actor passed at home on Friday, Dec. 31, per a TMZ report. Her longtime friend and agent Jeff Witjas soon confirmed the sad news to People, saying that he had thought she’d “live forever.” He later shared that she’d “died peacefully in her sleep” in the early hours of the morning.

“I will miss her terribly and so will the animal world that she loved so much,” Witjas said in part, in his original statement to the magazine. “I don’t think Betty ever feared passing because she always wanted to be with her most beloved husband Allen Ludden. She believed she would be with him again.”

On Monday, Jan. 10, TMZ reported that according to White’s death certificate, she suffered a stroke six days before she passed. Her cause of death is reportedly listed as a cerebrovascular accident, meaning that she lost blood flow to part of her brain. Sources also told the outlet that despite her stroke, she was “alert and coherent” and remained that way until she died peacefully in her sleep.

White was a beloved Hollywood star, who got her start in TV in the 1930s. She built up an impressive resume over the decades, with starring roles on shows such as The Golden Girls, The Mary Tyler Moore Show, and more recently, Hot in Cleveland. Her film career was successful as well, including memorable roles in The Proposal and You Again. Both on- and off-camera, she was a pioneer. White was the first female producer of a national TV series and to star in a sitcom, per PBS’ Pioneers of Television series.

White has been cited as an inspiration for many of today’s comedians, including her Proposal co-star (and Oscar winner) Sandra Bullock. “I know that a lot of people really find Betty White inspiring,” the actor said when presenting her the Screen Actor Guild Life Achievement Award in 2010, per People. “I mean, she’s been working in an industry for more than six decades in a business that doesn’t exactly value getting older.” Bullock went on to fondly joke that she wasn’t one of those people, saying that the comedian made her “feel like the slacker.”

During her life, White got to see her work and her character appreciated by the masses. In fact, the documentary Betty White: 100 Years Young – A Birthday Celebration is set to debut on what would have been her 100th birthday, Jan. 17. It includes a cast full of her big-name friends, including Ryan Reynolds, Tina Fey, Robert Redford, and Carol Burnett, who will speak about her career. Leading up to the premiere, she told People, “I’m so lucky to be in such good health and feel so good at this age.”

Last year, White celebrated turning 99, and her plans were adorable. The animal lover told the Associated Press beforehand that she was looking forward to feeding two ducks that often came to her house, plus a visit from Witjas in which he’d bring her a hot dog, fries, and a bouquet of roses. While that sadly ended up being her last birthday, White’s mark on the entertainment industry is indelible.

More like this
At 28, Rosie Perez Risked Her Career To Stop Playing Stereotypes
By Gabrielle Bondi
Reese Witherspoon Confirms This Fan Favorite Will Return For 'Legally Blonde 3'
By Jake Viswanath
Vanessa Hudgens Is Reportedly Engaged To Cole Tucker
By Jake Viswanath
Alicia Silverstone Revives Her 'Clueless' Character In This Super Bowl Commercial
By Jake Viswanath
Get Even More From Bustle — Sign Up For The Newsletter
From hair trends to relationship advice, our daily newsletter has everything you need to sound like a person who’s on TikTok, even if you aren’t.

This article was originally published on Dec. 31, 2021