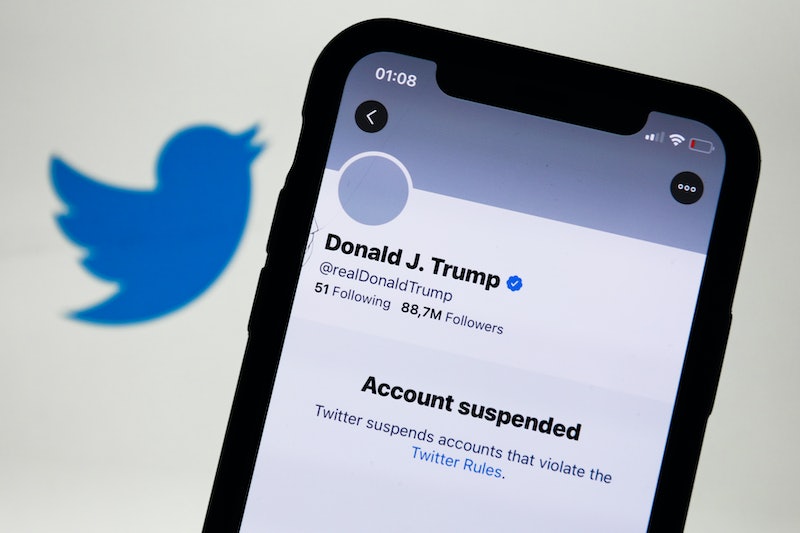 Donald Trump fired off more than 50,000 tweets during his time on his signature social media platform, but his ability to disseminate unfiltered messages in 280 characters or less just came to an end. Following the insurrection at the United States Capitol building, Twitter permanently suspended Trump's private account on Friday, Jan. 8, citing "the risk of further incitement of violence." It was a decision that sparked strong opinions. After sparring with POTUS online for more than four years, many celebrities reacted to Trump's Twitter ban with a mix of appreciation, glee, and as much sympathy as could be expected — that is to say, none at all.

Trump had first been temporarily suspended on Jan. 6, after his supporters stormed the Capitol. Then, Twitter gave him another chance, only to soon fully ban him. A message posted to the Twitter Safety account explained that the decision was made with the outgoing president's recent tweets and "the context of horrific events this week" in mind. The company noted it had been clear that "additional violations of the Twitter Rules would potentially result in this very course of action."

For many, the move was long overdue and very welcome. Chrissy Teigen, the subject of multiple Trump Twitter feuds, couldn't help but laugh (in all caps) after the news broke.

Trump's 2016 election rival Hillary Clinton attached a simple checkmark emoji to a years-old tweet in which she told Trump to delete his account.

Actor Josh Gad pointed out that a man who can't be trusted with a Twitter account scarily still has the nuclear codes.

Mark Hamill guessed that the president's day "just got a whole lot WORSE."

Jameela Jamila tweeted that 2021 "is looking up again."

Mark Ruffalo and Jim Gaffigan sent their thanks to Twitter and its executives.

Sacha Baron Cohen celebrated the success of his call for Twitter to ban Trump.

Yvette Nicole Brown joked about Trump not being able to use the platform to issue his "official word."

The Daily Show's account simply loved to not see it.

Julia Louis-Dreyfus and W. Kamau Bell both wondered what took Twitter so long.

Dan Rather wondered "if a Tweet falls in a forest and no one is around to hear it..."

Kathy Griffin, Patton Oswalt, and George Takei all had jokes.

Rob Reiner wrote that Trump "cried fire in a crowded theater once too often."

And so it ends for @realDonaldTrump.