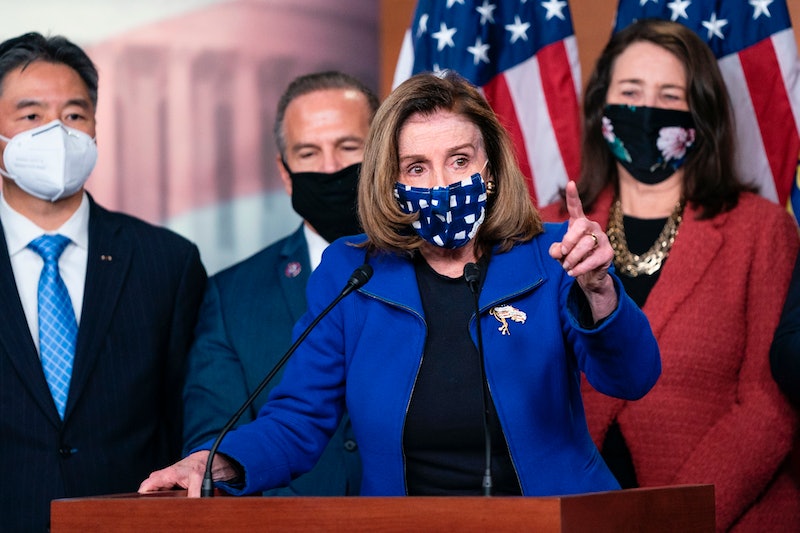 After a second impeachment trial, former President Donald Trump was acquitted in the U.S. Senate on Saturday, Feb. 13. While 57 senators voted in favor of conviction compared to 43 against, the vote fell short of the 67 votes needed to convict, as NPR reports. The contentious decision quickly became a trending topic on Twitter, with celebrities joining in to tweet their reactions.

Trump was impeached for the second time by the U.S. House of Representatives a month prior, on Jan. 13. The articles of impeachment accused him of “incitement of insurrection” in response to the deadly attack on the Capitol by his followers on Jan. 6. For weeks after the November election, he falsely claimed that the election was stolen from him, culminating in a rally in Washington, D.C. prior to the certification of the vote. After he and other supporters encouraged attendees to “fight,” the riot ensued. Trump has denied that he is responsible.

Given the devastating events of events of Jan. 6, many celebrities previously called for Trump to be held accountable. Not surprisingly, then, the fact that he’s now been acquitted came as a blow to them. Some Hollywood stars felt strongly that he should face consequences and condemned the outcome in the Senate; for example, Josh Gad recalled the time Trump himself pointed out how much he can get away with, and Schitt’s Creek co-creator and star Dan Levy commented on “the corruption.” Morning Joe co-host Joe Scarborough called out GOP members of the House and Senate who turned “a blind eye.”

Former Daily Show host Jon Stewart expressed his dissatisfaction by sharing how he interpreted Senate Minority Leader Mitch McConnell’s decision, which was to vote to acquit despite calling him “morally responsible” for the siege. Stewart wasn’t the only one, either. Actors Padma Lakshmi, Mia Farrow, and others joined in.

Lakshmi also called out the “cowards” who refused to convict, while Alyssa Milano wrote that only seven of the Republicans in the Senate had the “patriotism and integrity to convict a tyrant.”

And it was actor Ron Perlman who was perhaps the most blunt of them all. He wasn’t to address the former president directly and call him a “piece of sh*t.”

And so ended the second impeachment.