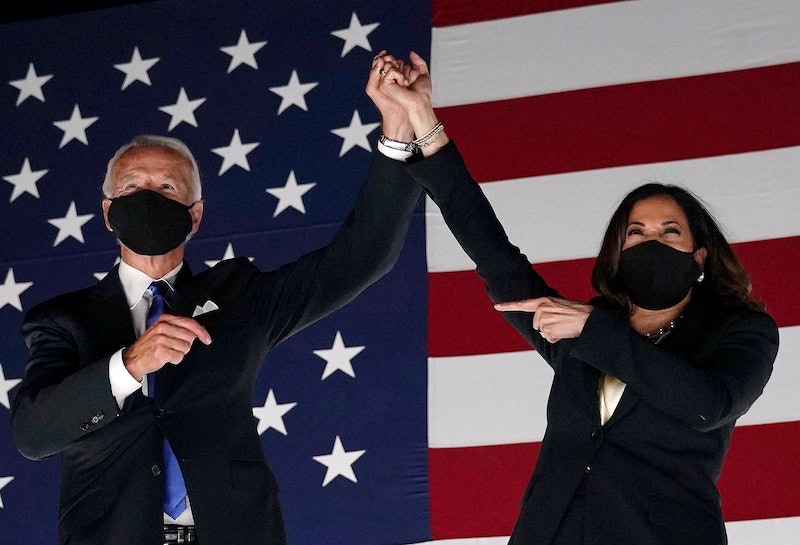 After days in vote-counting limbo, Joe Biden is now the president-elect of the United States, with his running mate, Kamala Harris, making history as the first female, Black, and South Asian vice-president-elect. It’s been a cause for celebration for Biden-Harris supporters around the country, including many celebrities who took to Twitter to express their joy and relief at the much-anticipated election results.

After outlets began to call the race on Saturday, Nov. 7, the soon-to-be president shared his own message. He focused on unity at a time when his opponent, incumbent President Donald Trump, has falsely claimed that he is losing due to election fraud. Biden wrote that he is “honored that you have chosen me to lead our great country.”

“The work ahead of us will be hard, but I promise you this: I will be a President for all Americans — whether you voted for me or not,” he added. “I will keep the faith that you have placed in me.”

Harris also had a hopeful message, writing that the election is about so much more than either her or Biden. “It’s about the soul of America and our willingness to fight for it,” she wrote. “We have a lot of work ahead of us. Let’s get started.”

A lot of celebrities were emotional after the big news came out, including vocal Biden supporters Chrissy Teigen and Ariana Grande. Teigen, who had the chance to get a “Kamala hug” on the eve of the election, first tweeted a trio of crying emojis in response to New Yorkers cheering about the news, while Grande wrote, “CRYING” and “THANK GOD.”

Teigen then followed up her first reaction with several more, including one very specific expression of her current state of relief: “My god it feels like I just took off a weighted blanket, unhooked my bra and taken out my extensions all at once.” Her husband, singer John Legend, made it clear he was feeling “schadenfreude.”

Meanwhile, former Secretary of State Hillary Clinton, who won the popular vote but lost the 2016 presidential election to Trump, had a lengthier and more serious message. She highlighted “a history-making ticket, a repudiation of Trump, and a new page for America.” Actor Kerry Washington noted that "the people have spoken!" and thanked voters for making history.

SNL vet Leslie Jones congratulated the president-elect with a video honoring the many people who helped him on the road to victory, placing their heads on the bodies of Avengers. “YASSSSSSS!! CONGRATS PRESIDENT BIDEN!!” she wrote.

Late-night comedy hosts were quick to speak out. Stephen Colbert painted quite the visual with his tweet describing “joy like swords”; Seth Meyers made light of Trump’s one-term presidency and golfing habit; Samantha Bee got to share a video she’d been holding onto for four years; and Trevor Noah made his feelings clear with no words in his post at all, just footage of the soon-to-be former president.

USWNT stars Alex Morgan and Megan Rapinoe also weighed in, both celebrating Biden and Harris. Morgan tweeted a photo of the duo, and Rapinoe sent her “congrats.”

Singer Shakira noted that she was “celebrating with [her] children this new phase of unity and healing that begins now with Biden as new president elect.” Cher, for her part, wrote that she jumped on her bed as part of her elated reaction.

The Kardashian-Jenner family had encouraged get-out-the-vote efforts, and even though Kim Kardashian West’s husband, Kanye West, was defeated in the election, many members joined the online cheers for Biden and Harris. Kim shared a photo of the winners alongside three blue hearts, Khloé said she “[wants] to cry tears of joy!!!!,” and Kendall Jenner tweeted that she was “emotional, relieved, and filled with joy this morning!!!”

Miley Cyrus referenced one of her old hits in a tweet, writing, “Now THIS is a PARTY IN THE USA!” Her fellow pop stars Camila Cabello, Selena Gomez, and Demi Lovato also celebrated, with Cabello saying, “Today is a good day!!!!!!!!!!!!,” Gomez writing, “YES!!!,” and Lovato noting that we can “let the healing begin.”

Among the flood of celebrity tweets, one of the most poignant came from Mindy Kaling. The actor-slash-comedian’s reaction highlighted that the election outcome is a win for representation and showed how much that means for her. “Crying and holding my daughter, ‘look baby, she looks like us,’” she wrote.

More like this
Matt Hancock’s TikTok Is The Most Matt Hancock Thing Ever
By Sam Ramsden
The Beyhive Is Mad At Harry Styles After Beyoncé’s Album Of The Year Snub
By Jake Viswanath
Beyoncé Has Officially Won The Most Grammys Ever & Twitter Is Losing It
By Jake Viswanath
Here’s How You Can Watch The Grammys 2023 In The UK
By Emma Madden and Catharina Cheung
Get Even More From Bustle — Sign Up For The Newsletter
From hair trends to relationship advice, our daily newsletter has everything you need to sound like a person who’s on TikTok, even if you aren’t.