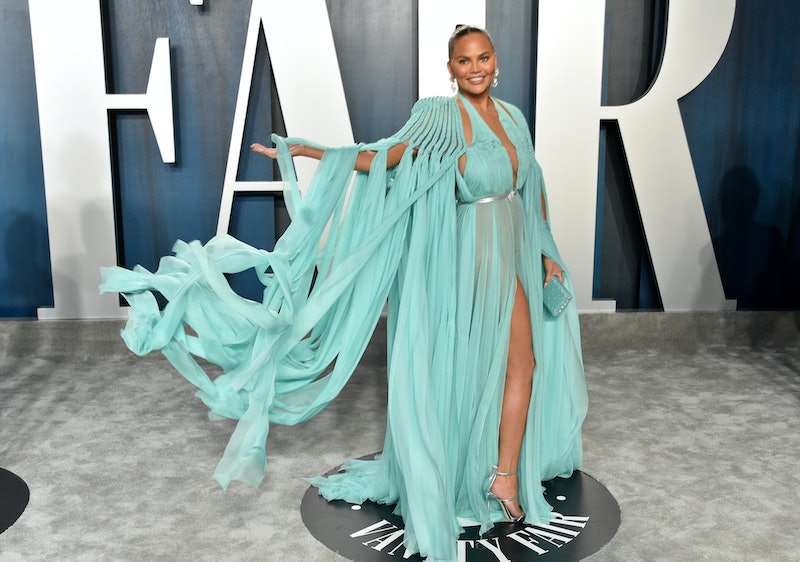 A Kamala hug can leave even celebrities starstruck. Chrissy Teigen said she is "not showering" after attending Joe Biden and Kamala Harris' Philadelphia rally on Monday, Nov. 2 and receiving a hug from Harris herself. And honestly, we can't blame her.

On Monday, Teigen joined her husband, John Legend, in Philadelphia as he performed at Kamala Harris' final rally for her vice presidential campaign. The rally marked Teigen's first public appearance since announcing that she and Legend suffered a pregnancy loss in September, and it seemed to have been a very joyful occasion. Although it wasn't captured on camera, Teigen was ecstatic that she received a hug from Harris — or at least she's fairly certain that she did.

"Not showering off my Kamala hug," she tweeted on Tuesday. "I’m not even sure if we hugged honestly I was very in awe but not showering either way."

She also started her election stress commentary early, noting that she was already experiencing physical pain. "Anyone else’s entire body also hurt??" she asked her followers. "I’m so nervous."

The model-turned-entrepreneur also shared videos from the rally, during which she joined Legend onstage before he played his new single "Never Break," and poked fun at what she ended up saying to attendees. "All I could muster was 'hi everyone!'" she wrote. "This mouth of mine and that’s all I could do. An honor to be in Philly to support Kamala and Joe."

During the important campaign event, Legend spoke about how he and his wife were teaching their children Luna and Miles to get involved in U.S. government and even called the young kids onstage, who showed up with Teigen's mother, Vilailuck Teigen. "I want you guys to see my wife is here and my daughter, Luna's, here," he said to the crowd. "My son, Miles, is here. We're teaching our young people early that they've got to participate in our democracy. We're here to save democracy. All of us are here together to save democracy, right?"

Of course, Teigen is a noted critic and subsequent target of Donald Trump, so it's no surprise that she's happy to endorse Biden and Harris. In a September interview with Marie Claire, Teigen said her "biggest regret" was not speaking out in support of Harris during the Democratic primaries, as she didn't want to endorse a specific candidate. Now, she "could not be more thrilled" that Biden chose her as his running mate. "Women all over the world are seeing a piece of them in a woman of power, and that kind of influence is paramount in what we need to continue this future of badass women in politics," she said. "Between people like Kamala and [Alexandria Ocasio-Cortez], I have more hope than ever.”

More like this
Here’s How You Can Watch The Grammys 2023 In The UK
By Emma Madden and Catharina Cheung
Blake Lively Is Trolling Ryan Reynolds Again – Over Wrexham FC
By Sam Ramsden
Twitter Has Renamed Ekin-Su After *That* 'Dancing On Ice' Performance
By Sophie McEvoy
Harry Styles Just Split His Pants In Jennifer Aniston’s Face
By Sam Ramsden
Get Even More From Bustle — Sign Up For The Newsletter
From hair trends to relationship advice, our daily newsletter has everything you need to sound like a person who’s on TikTok, even if you aren’t.