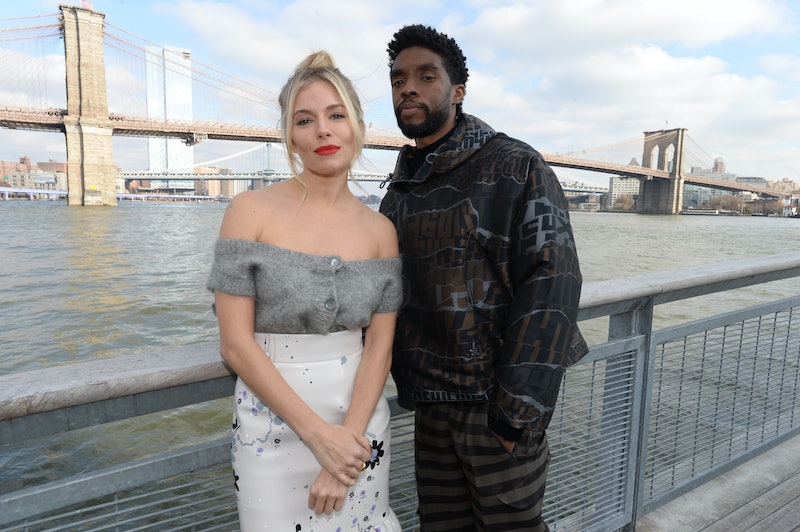 Nearly one month after the beloved actor's death, the outpouring of tributes to Chadwick Boseman from his peers has continued. On Monday, Sienna Miller revealed Chadwick Boseman fought for her to get fair pay on 21 Bridges, redistributing part of his salary after the studio refused to meet her requested fee. 21 Bridges, which premiered in 2019, followed an NYPD detective named Andre Davis (Boseman) as he pursues a duo of serial killers in a high-stakes chase. Miller starred as narcotics officer Frankie Burns, who ultimately helps crack the case.

In August, Boseman passed away at 43 after a private battle with colon cancer, leaving many of his former costars reeling. Over the past several weeks, many actors have come forward with fond stories about the actor. Miller recently added to that list, revealing that Boseman fought for higher-pay for her participation on 21 Bridges. Speaking with Empire, the actor said she wasn't sure whether or not to tell the story, but found it "a testament to who he was."

Miller described 21 Bridges as a "pretty big-budget film" and claimed that she asked for a salary "the studio wouldn't get to," referencing the enduring pay disparity in Hollywood. Additionally, she'd been hesitant to return to work as her daughter was starting school, and she reportedly told the producers, "I’ll do it if I'm compensated in the right way." When the studio refused to meet her number, Boseman "ended up donating some of his salary" to make sure Miller could join the project and be compensated fairly. Miller added: "He said that that was what I deserved to be paid."

The American Woman actor added that she was utterly grateful Boseman would go to bat for her in this way, calling the exchange "the most astounding thing that I've experienced." Miller added that not many other men in Hollywood would be willing to put their own salary on the line, saying it was "unfathomable" to "imagine another man in that town behaving that graciously or respectfully." She even noted that following the incident, she'd spoken to other "male actor friends" about what Boseman did, only to have them "go very very quiet and go home and probably have to sit and think about things for a while."

Miller also noted that Boseman never publicized his actions, noting that there "there was no showiness." Instead, she said, the Black Panther star essentially said, "'Of course I'll get you to that number because that's what you should be paid.'"

More like this
Stephen Graham & Steve McQueen Are Working On A Wartime Drama
By Darshita Goyal
Channing Tatum “Nearly Killed” Salma Hayek During 'Magic Mike' Lap Dance
By Sam Ramsden
Jemima Khan Used Her Own Life As Inspo For 'What’s Love Got To Do With It?'
By Darshita Goyal
Gerard Butler Insisted On Adding This Pivotal Scene To 'Plane'
By Catharina Cheung
Get Even More From Bustle — Sign Up For The Newsletter
From hair trends to relationship advice, our daily newsletter has everything you need to sound like a person who’s on TikTok, even if you aren’t.