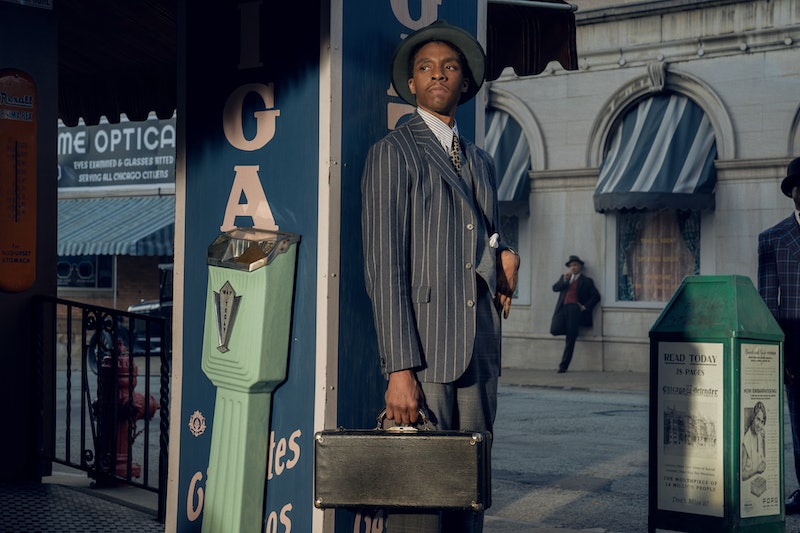 In the new Netflix movie Ma Rainey's Black Bottom, the late Chadwick Boseman and Viola Davis give new life to one of August Wilson's classic Broadway plays. The film, an adaptation of the 1984 stage show of the same name, imagines a 1927 recording session involving the real-life "Mother of the Blues" Ma Rainey as she comes into conflict with members of her band. Leading the confrontations is band member Levee (Boseman). The horn player has his own lofty ambitions to become a music star in his own right, and he is not content to linger in the considerably long shadow of Ma Rainey.

The movie is receiving considerable attention not only for its adaptation of an important cultural work by one of the twentieth century's most lauded playwrights, but also because of Boseman's starring role. The actor died on Aug. 28, 2020 following a four-year bout with colon cancer he had not disclosed to the public, and any and all remaining works of his are now being cherished even more by fans and colleagues alike. Not even those who worked with Boseman on Ma Rainey knew of his illness, though they all came away impressed by his talent and dedication to his craft. "He did all he could do with what he was given, and he left it here for us to enjoy," Denzel Washington, who produced the film, told CBS News. "Chad will live forever. Period."

Here are some other things to know about Chadwick Boseman in Ma Rainey's Black Bottom.

Is Chadwick Boseman's Character Based On A Real Person?

As Ma Rainey's Black Bottom is based on a play, Chadwick Boseman's character is based on a fictional character from said play. The trumpet player Levee, one of the main characters in the story, is an ambitious horn player with dreams of starting his own band and becoming a major star. This brings him into conflict with Ma Rainey, as she is the "Queen of the Blues" and has no desire to relinquish her title. According to Encylopedia.com, Levee wasn't based on any individual, but rather he "literally embodies the aspirations and disappointments of black males during this era and, arguably, today."

Is This Chadwick Boseman's Last Performance?

His performance in Ma Rainey's Black Bottom marks the final film role of Chadwick Boseman's career, as all other movies that he appeared in have already been released. However, there is still one more Boseman TV role that has not been released. Prior to his passing, Boseman performed the voice acting role of T'Challa for the upcoming Marvel Studios animated series What If...?. The series is set to premiere on Disney+ sometime in 2021, and when it does it will officially become the last performance of Boseman's career.

With Ma Rainey's Black Bottom being released ahead of the Oscar eligibility deadline of Feb. 28, 2021, Chadwick Boseman is 100 percent eligible to compete for an Academy Award. And indeed, many critics believe the late actor is one of the favorites for either Best Supporting Actor or Best Actor, depending on how Netflix campaigns for his nomination. There is also speculation that Boseman could become the first person in history to receive two posthumous acting nominations in the same year, as his role in another 2020 Netflix film — Da 5 Bloods — is also getting lots of Oscar buzz, according to Variety.

Is Chadwick Boseman Really Playing An Instrument In Ma Rainey?

Chadwick Boseman's character plays the trumpet in Ma Rainey's Black Bottom, and he apparently really did play the instrument on set. "[I remember] how much he loved to rehearse. How much he loved to play that trumpet," co-star Colman Domingo told Cinema Blend. "He would walk in, sort of like with a quiet grace, with his big ol’ brim hat to the side and his trumpet, and usually some Harem pants ... He didn’t look like an actor, he looked like, you know, a musician coming through, just willing to play and willing to be open." It's unclear if Boseman's actual trumpet playing is heard in the film, but it definitely looks like the actor put in the work.

There is no question that Chadwick Boseman was taken too soon. But the body of work he left behind is wildly impressive, and he may have even saved his best performance for last with Ma Rainey's Black Bottom.