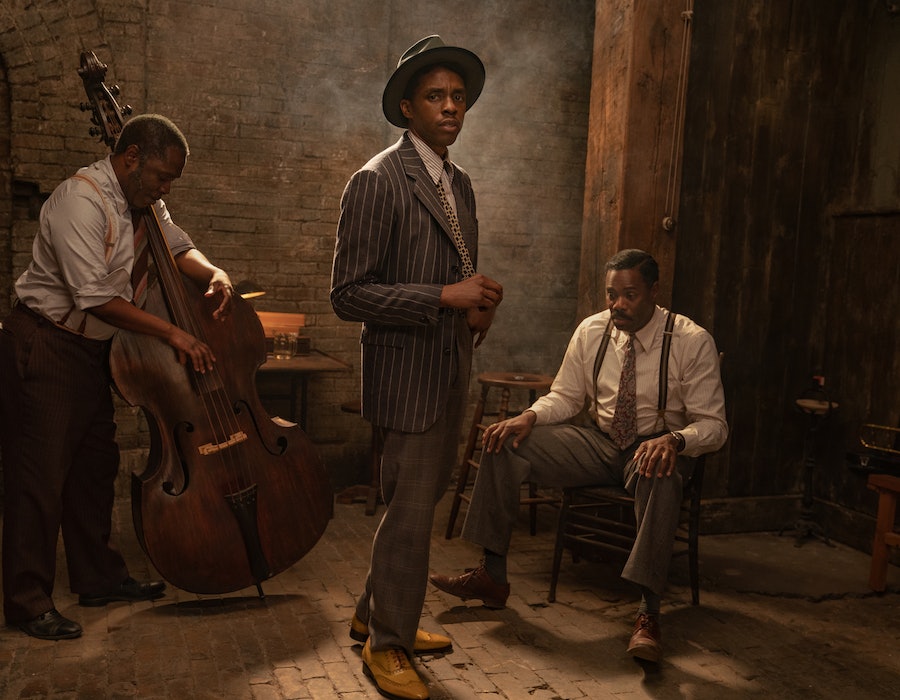 Despite his tragic death in August, fans will get to see Chadwick Boseman on their screens one more time, courtesy of Netflix. On Thursday, Oct. 1, the first photos from Ma Rainey's Black Bottom were released, teasing Boseman's final film role in the adaptation of August Wilson's 1984 play. The movie will premiere on December 18, and the streaming service has rescheduled several events surrounding the project in the wake of Boseman's death.

Set in the 1920s, the film stars Viola Davis as the titular Ma Rainey, as the legendary jazz singer faces off with her band and white producers in the recording booth. "Tensions and temperatures rise" during on particularly heated session, when "the fearless, fiery Ma engages in a battle of wills with her white manager and producer" over control of the session and her music, according to a synopsis from Netflix.

Boseman plays Levee, a trumpet player "who has an eye for Ma’s girlfriend and is determined to stake his own claim on the music industry." He stirs things up in the recording studio, "revealing truths that will forever change the course of their lives," per the synopsis. Ma Rainey's Black Bottom was produced by Denzel Washington, and also stars Colman Domingo and Zola breakout Taylour Paige.

On Aug. 28, the Black Panther star's family announced via his official Twitter page that Boseman had died at the age of 43, after a secret, years-long battle with colon cancer. "Chadwick was diagnosed with stage III colon cancer in 2016, and battled with it these last 4 years as it progressed to stage IV," the family's statement read. The family also revealed that Boseman was undergoing treatment in between filming roles in Da 5 Bloods and Ma Rainey's Black Bottom; however, he chose to keep his illness private. "Chadwick did not want to have people fuss over him. He was a very private person," his longtime agent Michael Greene told The Hollywood Reporter in early September. Greene continued, saying that the actor worked through "hard-core pain" to film Ma Rainey's Black Bottom because he "felt that being able to be with Denzel [Washington] and to launch this cycle of [playwright] August Wilson at Netflix was so exciting to him."

Even through all of his pain, Boseman made a significant impact on his Ma Rainey's Black Bottom cast members, many of whom publicly paid tribute to the actor in the wake of his death. "Chadwick [there are ]no words to express my devastation of losing you," Davis wrote on Twitter. "Your talent, your spirit, your heart, your authenticity…It was an honor working beside you, getting to know you….Rest well prince…May flights of angels sing thee to thy heavenly rest. I love you!"

More like this
Here’s Everything Coming To & Leaving Netflix In October
By Jake Viswanath
What’s New On Netflix: Ana De Armas’ 'Blonde' & A Nick Kroll Special
By Arya Roshanian
What’s New On Netflix: Meet 'The Real Bling Ring'
By Arya Roshanian
Devi Is Going To Meet A “Smoldering Bad Boy” In ‘Never Have I Ever’ Season 4
By Jack Irvin and Gabrielle Bondi
Get Even More From Bustle — Sign Up For The Newsletter