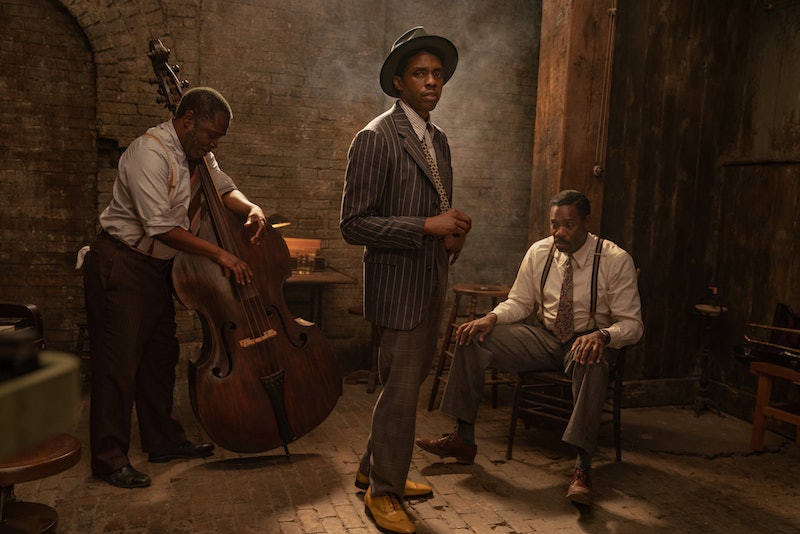 Ahead of the awards season, Netflix plans to campaign Chadwick Boseman as a lead actor for his final role in Ma Rainey’s Black Bottom. The Netflix film, based on playwright August Wilson's 1982 play, chronicles the tensions between the trailblazing blues singer Ma Rainey (Viola Davis), her ambitious horn player Levee (Boseman), and the white management determined to control her music in 1920s Chicago. It'll arrive on the streamer on Dec. 18; and Netflix has confirmed to Variety that Boseman will be billed as a lead in the wake of his death.

Davis will also campaign for best actress for her role as the Mother of Blues, while cast members Glynn Turman, Colman Domingo, Michael Potts, and Taylour Paige will campaign for supporting actor categories. If successful, Ma Rainey's noms will be a historical feat, too. So far, only one film has had more than two Black actor nominations in Oscars history, per Variety: Steven Spielberg's 1985 film The Color Purple, which garnered actors Whoopi Goldberg, Oprah Winfrey, and Margaret Avery noms at the 1986 Oscars.

Boseman died in August after a private battle with colon cancer. He was 43. The late actor also starred in Spike Lee's Da 5 Bloods before his death, which came out in June, and there's a chance that he could be nominated in the supporting actor category for the role, too. If nominated, Boseman would join Ralph Richardson (for 1984's Greystoke: The Legend of Tarzan and Lord of the Apes) and Heath Ledger (for 2008's The Dark Knight) as just the third person to receive a posthumous supporting nom.

Netflix released the first trailer for Ma Rainey’s Black Bottom earlier this week, teasing Boseman's final role as the tenacious horn player who often butts heads with his musician colleagues. According to director George C. Wolfe, Boseman "put his entire being" into his character. "Chadwick put his entire being into Levee, and in some respects, Levee sort of demands that simply because of the Herculean scale of the role," Wolfe told Entertainment Weekly. "It's a phenomenal character, and he put every ounce of his energy, heart, and passion into it, and I remember literally once a week while we were filming, Chadwick would come over to me and say 'I'm so glad we had that two weeks of rehearsal, lord Jesus!'"

More like this
Here’s Everything Coming To & Leaving Netflix In August
By Jake Viswanath
What’s New On Netflix: 'Never Have I Ever' & 'Indian Matchmaking' Return
By Arya Roshanian
What’s New On Netflix: 'Bridget Jones’s Diary' & 'Monster-in-Law'
By Arya Roshanian
Amanda Seyfried Says She Felt Pressured To Shoot Nude Scenes At 19 Years Old
By Jake Viswanath
Get Even More From Bustle — Sign Up For The Newsletter