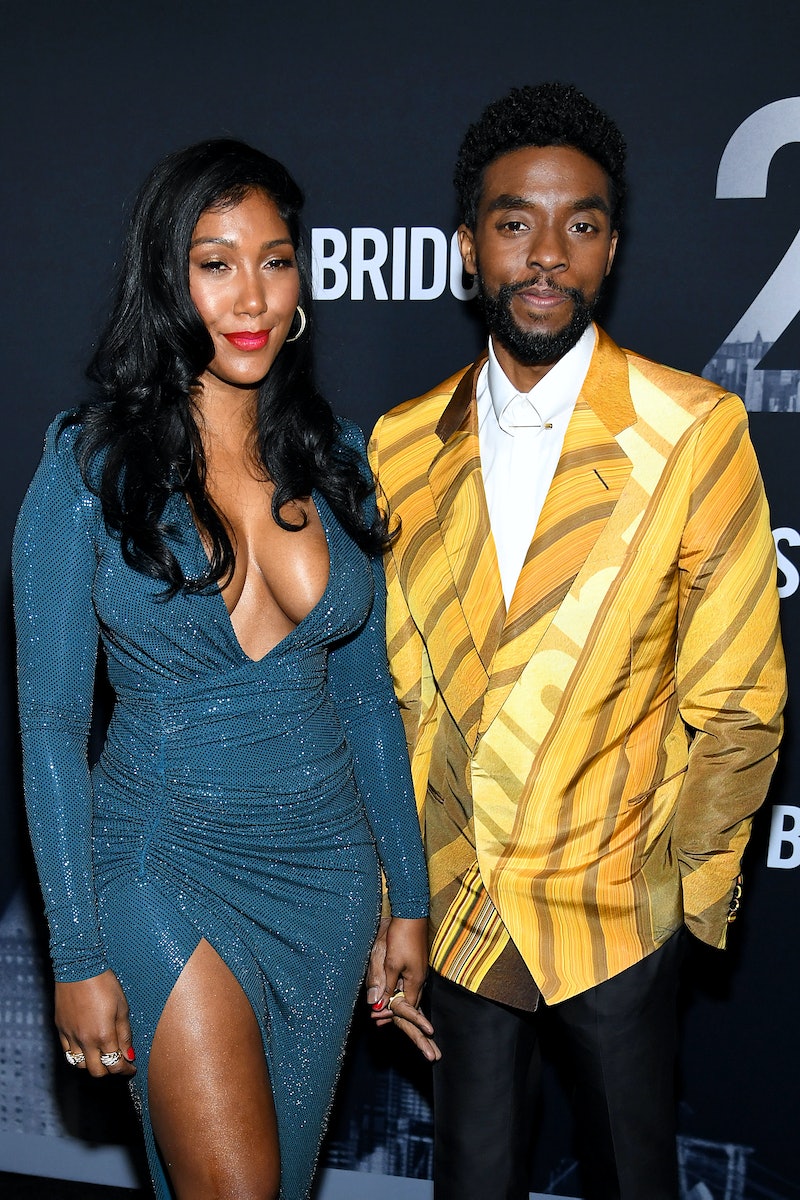 Chadwick Boseman's films aren't just impacting his fans, but his family, too. The late actor's widow, Simone Ledward Boseman, paid tribute to his legacy both on and offscreen with an emotional speech at the 2021 Gotham Awards on Monday, Jan. 11. The Black Panther star was posthumously honored with the Actor Tribute award at the virtual ceremony alongside his Ma Rainey's Black Bottom co-star Viola Davis.

Ledward Boseman began her speech by explaining that honesty was so important to her husband, both personally and professionally. "He was the most honest person I'd ever met because he didn't just stop at speaking the truth," she said. "He actively searched for it in himself and those around him and in the moment... If one does not live in truth then it's impossible to live in line with the divine purpose for your life. And so it became how he lived his life, day in and out. Imperfect but determined."

She went on to explain how the actor's quest for the truth inspired all of his performances, which included portrayals of historic Black figures like Jackie Robinson in addition to his most well-known role of T'Challa in Black Panther. "He realized that when one is able to recognize that when their strength does not come from themself, they rarely mess up," she said. "That's what he was doing when he was acting. [He] was not merely telling a story or reading lines on a page, but modeling a path to true fulfillment."

Boseman died in August after a secret four-year battle with colon cancer. According to a post shared on his Instagram account, Boseman died at home "with his wife and family by his side." At the time, fans did not know the actor was married, as he kept his relationship private. The only time he spoke publicly of Ledward Boseman was at the 2018 NAACP Image Awards, where he thanked his then-girlfriend in a speech. "Simone, you're with me every day," she said. "I have to acknowledge you right now. Love you."

Along with receiving the Actor Tribute award, Boseman was nominated for Best Actor for Ma Rainey's Black Bottom, his final film role, but Riz Ahmed ultimately won for his performance in Sound of Metal. Ledward Boseman said that it was an honor to accept the Actor Tribute on his behalf, calling it an "acknowledgment not only of his profound work but of his impact on this industry and this world." She ended her speech by speaking to her late husband directly. "Chad, thank you," she said. "I love you. I am so proud of you. Keep shining your light on us. Thank you."

More like this
Twitter Is Overjoyed By Angela Bassett’s Record-Making Oscar Nomination
By Maxine Harrison
Rihanna Shares Video Of 'Black Panther 2' Filmmakers' First Reaction To “Lift Me Up”
By Radhika Menon
Dolly Parton Released 4 New Baking Mixes With Duncan Hines
By Alexis Morillo
Jennifer Coolidge Hunted For Jewels & Lashes In J.Lo’s Hotel Room
By Jake Viswanath
Get Even More From Bustle — Sign Up For The Newsletter
From hair trends to relationship advice, our daily newsletter has everything you need to sound like a person who’s on TikTok, even if you aren’t.