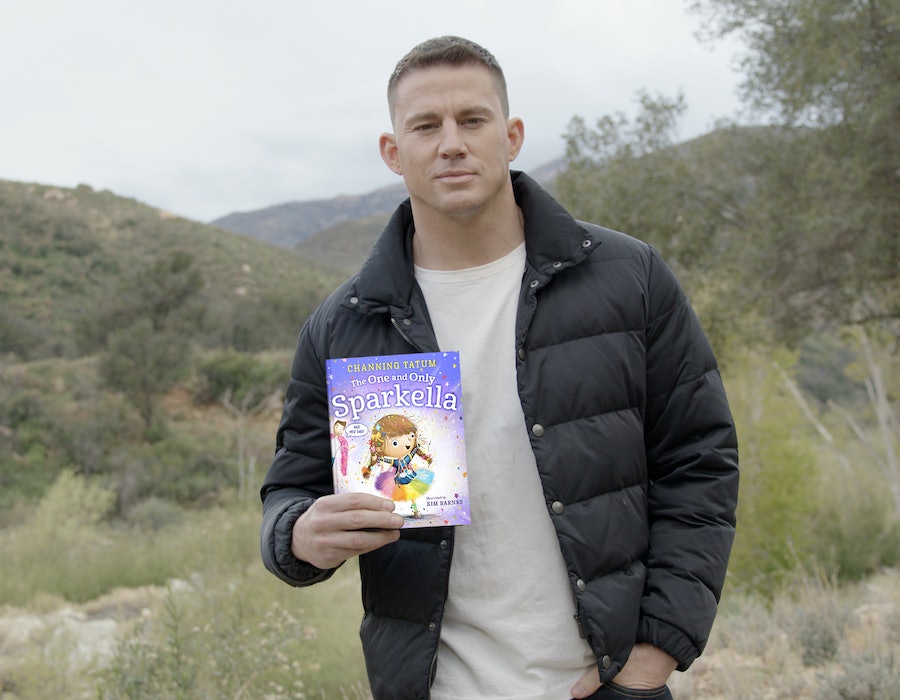 Channing Tatum can’t believe he’s an author. After spending his childhood and adolescent years hearing from adults that he wasn’t a strong student, “the fact that my whole business is writing and movies, and now books, obviously, is hysterical,” he tells Bustle.

At this point in his career, Tatum’s more than proven the naysayers wrong. In addition to his work acting, producing, and dancing in modern classics like Step Up, 21 Jump Street, and Magic Mike, his first children’s book, The One and Only Sparkella, is out on May 4.

The book follows the story of Ella, otherwise known as Sparkella, a quirky young girl who has a close relationship with her boa-donning and tutu-wearing father. But after realizing she dresses and acts differently from her classmates at school, she tries to tone down her clothing and behavior to fit in — only to get the nudge she needs from dear old dad. It’s a delightful story about father-daughter bonds and marching to the beat of your own drum.

Naturally, Tatum’s own seven-year-old daughter, Everly, inspired the story. “I was starting to kind of figure out how I was going to dad for the very first time [on] my own,” he says, acknowledging his 2018 divorce from ex Jenna Dewan. “The more I sort of just went into her world and did whatever she wanted, whether it was paint my nails or sleep outside and look for fairies, whatever it was, if I just kept going into her world, I could easily connect with her.”

As much as the book is about a young girl coming to terms with her identity for the first time, it’s also about the courage that children give their parents. “I think every parent says this, but their kid is [their] biggest teacher,” Tatum says. “I've learned more about myself having a child than I ever will from self-diagnosis or therapy or in anything. My friend [said] it's like watching your heart jump out of your body and run around.”

Below, Tatum talks about becoming a hair-braiding whiz, fatherly chats with Guillermo Del Toro, and his love of voice notes.

On finding inspiration in his daughter Everly:

[The idea was based on] the very first moment that I caught her kind of becoming self-aware. She would wear crazy things and was really expressive. And she had this — not a cape, but a poncho sort of thing that when you held your arms out, she looked like a slice of a watermelon. And it was one of her favorite things. I literally don't even know where we got this thing or if it got sent to us or what, but somehow it became part of her life. She loved this thing, because it made her laugh. And then I remember in preschool, we were getting ready to take her to school, and she puts it on and then I'm like, “All right, let's go, we're running late.” And then she realized that she was going to have to go to school in it. And then she panicked and [was] like, “No, no, no, I need to change. I need to change.” And I was like, “Why? You love it. You love that thing. It's awesome.” And she's like, “No, I don't want to get made fun of, I don't want people to laugh at me.”

And it shattered my heart, because I was like, oh my God, that was the very first time that she became very self-aware — like what people are going to think of her or laugh at her or something. And it always stuck with me. And then that was kind of the genesis of the idea of how do you be more you and not worry so much? ‘Cause that worry is going to come. It's just a part of life. It is a part of us.

On finding out he was having a daughter:

Right when we first started taking [Everly] to preschool and stuff, I’d drop [her] off and I could always tell who got the kid ready if it was a girl because the hair always looked crazy. And I was just like, “Oh yeah, that was a dad. That was a bad morning.” You know? And I always felt proud that I was like, “Ha, I know how to braid hair!”

On getting child-rearing advice from director Guillermo del Toro:

Right when I first had [Everly], it was a really good way to know if I really wanted to do a job, because it would [be] like, is this job good enough that I can explain why I had to not be there for [her]? And then I ultimately ended up taking almost four years off because I was working too much and I just wanted to be around for those really formative first four or five years. I got some really good advice from Guillermo del Toro. He was just like, “Man, from [age] one to about five, those are the bonding years. You have to be there for those.” He's like, “I wasn't, and I've definitely had to work to sort of right that ship in a way.” And I took it to heart. He's a smart, smart man, that guy.

On building a career off of voice notes:

I'm a big voice note person. I think my daughter probably types faster [than me]. Even writing, sometimes for whatever reason, I'll write something down really fast and then I'll go back and I'm like, wait, that wasn't all of the idea, you know? And so I have just thousands and thousands of voice notes. That's probably more of how I work. I'll just wake up in the morning, and if I've had a dream or some crazy thing, I'll just dump it, enter the voice note, and then I'll forget about it sometimes and then kind of rediscover things.

That's how me and my writing partner [Reid Carolin] wrote Magic Mike and Dog. I'm not a writer's writer. Like I would never go and write a script, because it would take forever. So I come up with a lot of bad ideas and I have Reid interpret them. He's my translator!

More like this
Jessica Simpson On The Time She Was Pursued By A Backstreet Boy & An *NSYNC Member
By The Editors
We’ve Entered The Hot Boy Reader Era
By Samantha Leach
Channing Tatum “Nearly Killed” Salma Hayek During 'Magic Mike' Lap Dance
By Sam Ramsden
Delia Cai’s Small-Town Romance Goes Beyond The Tropes
By Samantha Leach
Get Even More From Bustle — Sign Up For The Newsletter
From hair trends to relationship advice, our daily newsletter has everything you need to sound like a person who’s on TikTok, even if you aren’t.