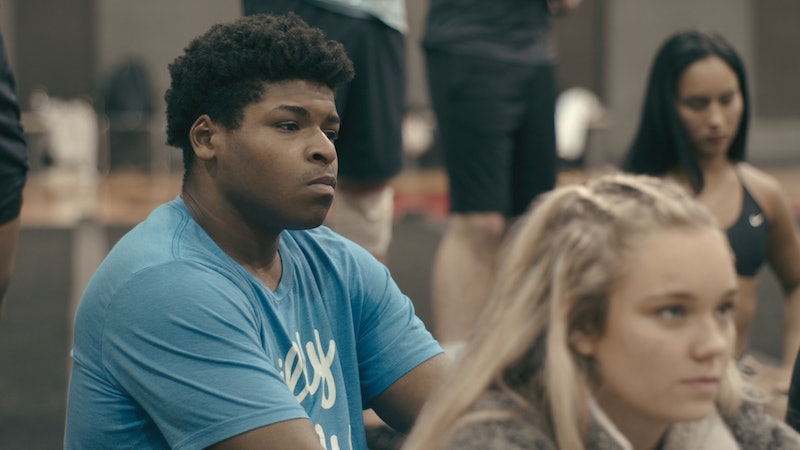 Following news of an FBI search of his Naperville, Illinois home, Jerry Harris has been arrested and charged with producing child pornography, per the Chicago Tribune. He was arrested on Thursday, Sept. 17, and is scheduled to appear in court later this afternoon. Bustle reached out to Harris' representatives, but did not receive an immediate response.

The arrest follows a lawsuit filed against Harris in Texas on Monday by parents of two 14-year-old twin boys, claiming the Netflix star solicited nude photos from them, sent sexually explicit messages, and sexually assaulted one of the boys. It was subsequently reported that the FBI had raided his Illinois home and opened an investigation into the young cheerleader. At the time, Harris denied any allegations against him in a statement from his attorney. "[We] categorically dispute the claims made against Jerry Harris, which are alleged to have occurred when he was a teenager," his attorney said, per NBC Chicago. "We are confident that when the investigation is completed, the true facts will be revealed."

The suit, per The New York Times, claims that Harris, now 21, met the unnamed boys when they were 13 at the American Cheerleaders Association Nationals in February of 2019. He would have been 19 at the time. According to the lawsuit, Harris allegedly solicited oral sex from one of the boys at the time, and later communicated with both of them via text and social media, allegedly soliciting nude photos.

The same day the lawsuit was filed, USA Today reported that Varsity Brands, a cheerleading company which recently employed the former reality TV star, had been notified of these same allegations of "inappropriate sexual conduct" against Harris. Varsity Brands then passed those complaints to police in Florida and Texas, thus triggering an FBI investigation. "We continue to cooperate with authorities in their inquiries on this matter," said a Varsity spokeswoman.

Harris, who gained national attention thanks to his positive attitude and motivating mat talks on Cheer, had recently inked endorsement deals with Walmart and Cheerios. He has since been removed from all Cheerios content and advertising, per the NYT. And according to USA Today, Harris has also been suspended from participating in any U.S. All Star Federation events and cheerleading competitions.

More like this
The Richest 'Bling Empire' Cast Member Is...
By Hugh McIntyre
G Flip Shared How They Got Romantic With Chrishell Stause & Discussed Babies
By Brad Witter
Bling Empire Isn’t Dorothy Wang’s First Reality TV Gig
By Brad Witter
'Selling Sunset's Christine Has Finally Addressed Her Oppenheim Group Exit
By Brad Witter
Get Even More From Bustle — Sign Up For The Newsletter