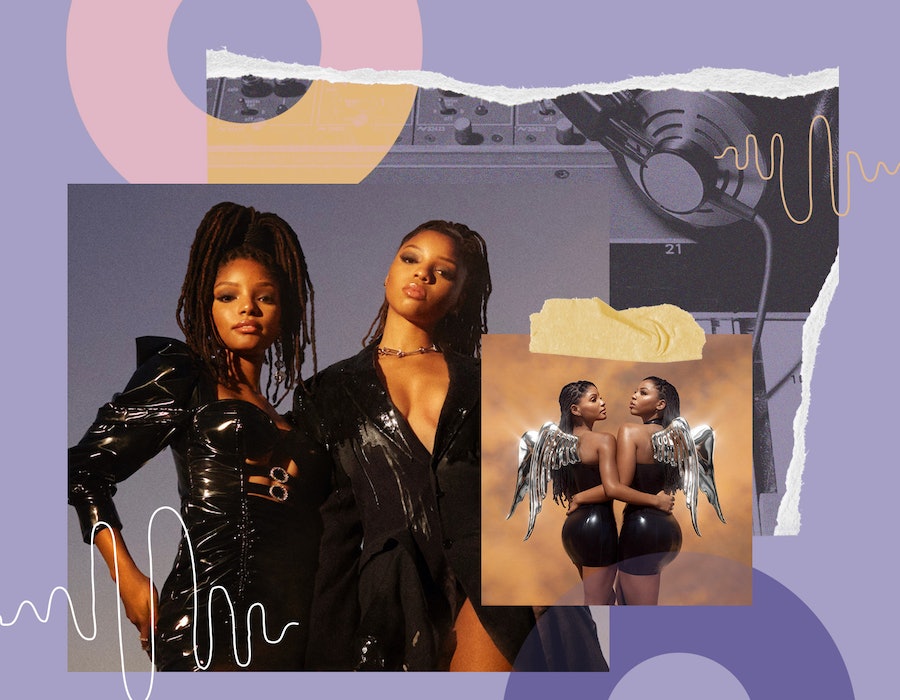 Chloe x Halle have their pre-performance routine down pat. First, they'll burn sage to cleanse the space in their dressing room. Then the sisters practice their vocal warmups and pause for a prayer. Finally, they'll change into their crystal-covered costumes, now ready to descend upon the stage. "We always get super, super nervous but our [rituals] help,” Halle Bailey, one half of the R&B duo, tells Bustle. But you wouldn't notice their nerves from watching them, as the sisters have confidently served up some of the most memorable and innovative musical performances of the quarantine era.

To promote their 2020 sophomore album Ungodly Hour, Chloe x Halle have turned their Los Angeles home into a state of the art performance space. They've built elaborate sound stages for award show cameos, dressed up their backyard tennis court as a concert venue, and used drones to shoot their sets. It wasn't the press tour they expected, but Chloe, 22, and Halle, 20, have always been good at adapting. “When we were younger there weren’t too many producers who wanted to work with us, because what do you write for two little Black girls?" Chloe says of the reaction they got from the industry before they were discovered by Beyoncé in 2015. "So we just kind of figured it out on our own."

While the former YouTube stars have evolved into a Grammy-nominated duo, their work still taps into the anxiety and angst that's plagued them since the early days of their career. Ungodly Hour in particular is a heart-wrenching meditation on relationships, heartbreak, and insecurity. “We're not always positive, happy-go-lucky," Chloe explains. "We have self doubt and sadness." It's their willingness to embrace their vulnerable side that makes their music so rich and relatable.

Ahead of their virtual Verizon Up concert, the sisters muse on the most emotional songs on Ungodly Hour and how Beyoncé taught them grace.

On Gossiping About Guys & Their Favorite Song On Ungodly Hour

What was going on in your life when you were making Ungodly Hour?

Halle: We were experiencing being in love and being heartbroken. [We wrote about] insecurities, the [feeling of] comparing yourself to other people, and the moments when you start getting in your head about what you have to offer. All of these things that we'd normally write in our diaries, we poured that out into this album. It was scary to put this album out and know people would hear our deepest darkest secrets; everything that you try not to show on the surface when you present yourself to the world.

Did making the album help you work through those difficult times?

Chloe: Music is really therapeutic for us. My sister and I have those times where we're talking to each other and the song kind of presents itself then and there.

Halle: It starts from us gossiping about a guy. Just talking crap about whoever it is and from there it turns into a song.

Between your tiny desk, the tennis court rendition of “Do It," and your Billboard performance, you’ve really innovated in the midst of quarantine. What have learned about yourselves as people and as artists over the last year?

Chloe: The hardest part was getting through the first performance we ever did. Right when the pandemic hit, BET did a COVID special [and we performed from] our garage. We set up our projector, the camera, and put up these green flashing strobe lights. We did it all ourselves and our little brother was our production crew. Halle and I were propping up our iPhones to make sure they weren't cutting off our heads. Once we got through that, we were like, "Okay, we can ramp up the production value and make it greater, better, bigger." We felt it wouldn't be fair to us to create an album that meant so much to us and not give it all the time and love it deserves.

What's your favorite song on the album?

Chloe: “Baby Girl.” [There were] a few times [when] I was brought to tears performing it. [There are so many] beautiful, strong women [who wonder] if they're good enough or ask, “Am I doing this okay?” “Baby Girl” says that you are great, you are here for a reason, you are not a mistake, you should just be comfortable being authentically yourself. That song constantly reminds me to snap out of it.

Take me back to some of your earliest memories of music.

Chloe: It would be Toni Braxton, Nina Simone, Beyoncé of course, Donna Summer, Imogen Heap, and Missy Elliott. All of the incredible women that take control and pioneer their music.

Halle: Chloe and I had a lot of the same taste growing up. I also loved Billie Holiday, Nat King Cole, Ella Fitzgerald, all the jazzy ones. These artists have played such a part in who we are today. Our music is just a melting pot of all the sounds we love.

Chloe: I think it was when I downloaded Kendrick Lamar’s Section.80 mixtape and Frank Ocean’s Nostalgia, ULTRA. I remember playing [them] over and over again on my computer before both of them started blowing up.

Halle: For me it was Billie Holiday. Lady Day was the first thing I had [heard] of hers and it was my treasure. I was like, “Wow, this is why I want to sing."

What's the best advice Beyoncé's ever given you?

Halle: Everybody can learn from her just by watching her and what she stands for. But being able to be a little bit close to her, I'm really learning her grace. She's such a graceful person who's just all about love and positivity. She's taught us that we can be anything we want to be as young Black women. We don't have to be restricted to just one thing.

More like this
Tove Lo Is Still Crying On The Dance Floor
By Ivana Rihter
Craig David Is Still Slicker Than Your Average
By Olivia-Anne Cleary
Even If She Tried, Beth Ditto Couldn’t Stay Away From Music
By Ivana Rihter
Everything To Know About Taylor Swift’s 10th Studio Album, 'Midnights'
By Grace Wehniainen and Jake Viswanath
Get Even More From Bustle — Sign Up For The Newsletter