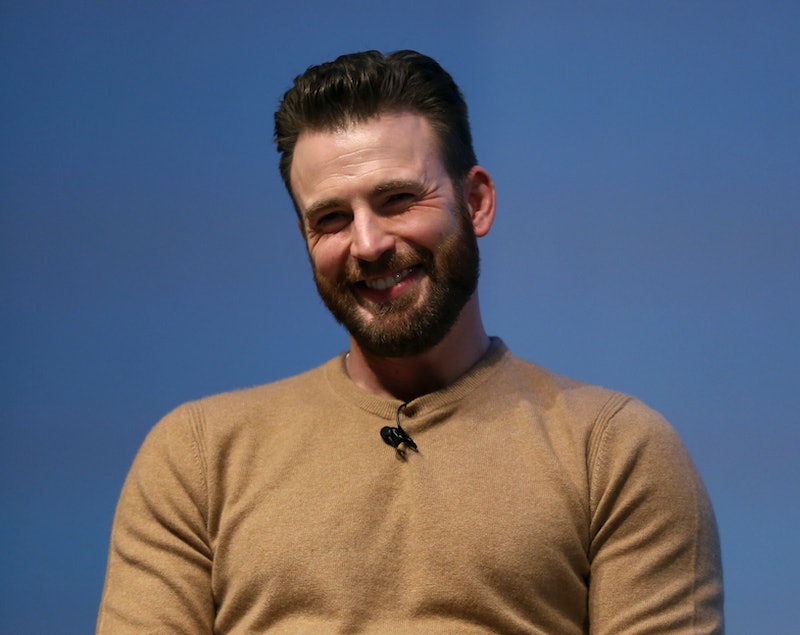 Let it never be said that Captain America doesn't have a sense of humor. A few days after going viral for some, um, scandalous pics, Chris Evans responded to the leaked photos with a surprisingly wholesome and patriotic message. And his status as Best Chris has never been more solid.

On Saturday, Sept. 12, Evans went viral after an Instagram post gone wrong. According to reports, Evans uploaded a video to his Instagram stories, but when the video ended, his entire photo gallery appeared, including one very NSFW nude photo. The video, captured by fans for everyone to see, was passed around Twitter, but seemingly deleted from the actor's page soon after posting. Many wondered if the pic was, in fact, his, or if the recording was simply photoshopped, or taken from someone else's phone.

Instead of denying the leak or addressing the matter directly, the actor decided to skip the controversy and went with a public service announcement instead: "Now that I have your attention," Evans wrote with a face palm emoji and a shrug emoji, "VOTE Nov 3rd!!!" Well, with orders like that, who can resist? (He is Captain America, after all.) Plus, the Internet saw an alleged d*ck pic, so, we kind of owe him.

Evans' response is pretty fitting for the man who not only starred as Captain America, but also just launched his political website, A Starting Point, aimed at helping create a more informed electorate. Leaking naked photos probably wasn't his first choice for how to bring attention to voting, but what's done is done. Even before the actor addressed the situation publicly, his MCU co-star Mark Ruffalo weighed in on the leak in similarly political terms. ".@ChrisEvans Bro, while Trump is in office there is NOTHING you could possibly do to embarrass yourself. See...silver lining," he tweeted late Saturday. Evans' brother, Scott Evans, also commented, joking on Sunday, "Was off social media for the day yesterday. So. What'd I miss?"

Chris Evans isn't the first celeb to have leaked naked photos, but he is one of the first to turn lemons into votes. It's what Captain America would want.