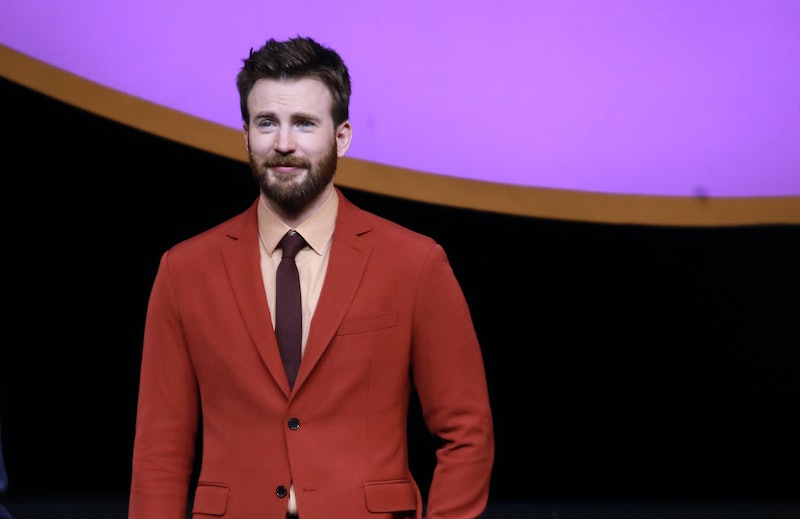 Captain America may have faced-off against some of the most powerful Marvel villains of all time, but in real life Chris Evans is tackling something much more sinister: the world of politics. However, despite his vocal dislike (and even disgust) of President Trump on social media, the Avengers star doesn't think it's smart to approach important world issues with anger and hostility. In fact, Chris Evans thinks it's best to treat politics like a relationship by approaching it with a little bit of empathy.

"There’s a time and a place for rage, and I think that’s a last resort," the actor explained in a recent interview with V Magazine. "You can just cast a wider net by saying, ‘What do you think? Get involved and form your own opinions.’ I’m trying to find more effective ways of coming together."

This is, of course, the entire goal of the political website the actor launched earlier this year, called A Starting Point, which aims at connecting civilians more easily with their elected government officials. "I model it after the way you operate within a relationship," Evans continued. "If you want a relationship to work, you have to listen and understand what the other person is thinking and feeling, even if you disagree — and work on finding commonality. As good as it feels to shout your opinion, you garner more results with a more empathetic approach.”

Evans went on to say that division has been one of the biggest negatives to come out of the Trump administration — something he's trying desperately to correct with his online platform. "My biggest concern is that his methodology is designed to divide," Evans added. "He has never once made an effort to bring us together. [A Starting Point] is designed to inform people so they can take a side."

This echoes similar sentiments Evans has stated in a video on the A Starting Point site, further explaining its origins. “It was an idea I had in 2017 — I was watching the news and there was something I didn’t understand [so] I went to Google it, and right away I was in the weeds,” Evans admitted, which prompted him to think, “What if there was a way that I could get not only concise answers to common questions, but get the answers from the elected officials themselves?”

More like this
Paul Rudd’s Secret To Eternal Youth Is Something You Can Try At Home
By Darshita Goyal
Eurovision Has Been Given A Whole New Look Ahead Of Its Liverpool Debut
By Bustle UK
Priyanka Chopra & Nick Jonas’ Matching Tattoos Have A Romantic Meaning
By Radhika Menon
Lisa Marie Presley's Secret Granddaughter Was Revealed At Her Funeral Out Of Nowhere
By Jake Viswanath
Get Even More From Bustle — Sign Up For The Newsletter
From hair trends to relationship advice, our daily newsletter has everything you need to sound like a person who’s on TikTok, even if you aren’t.