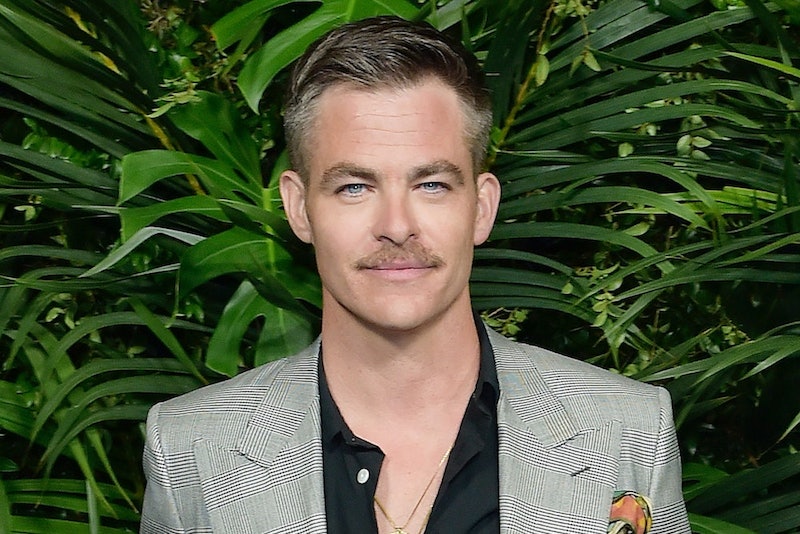 The never-ending Hollywood Chris discourse continues — this time with the most underrated Chris of all. Chris Pine weighed in on the various Chrises in Hollywood while on Comedy Central's digital series Stir Crazy with Josh Horowitz on Tuesday, Dec. 22. Naturally, Horowitz brought up Chris Hemsworth, Chris Evans, and Chris Pratt, but the host let it be known to Pine that he is, in fact, his personal favorite Chris. The Wonder Woman 1984 actor then joked that he needed to step up his Chris game.

"I feel like I'm the underdog right now so I'll take all the support I can get," Pine said. "Those damn Chrises, man. I just, it's either change my name or really just step it up." When Horowitz proposed an Avengers-type film with all the Chrises — one in which the actors just "sit around in cute sweaters" akin to Evans' Knives Out knitwear for two hours — Pine pitched a Comic-Con event called a Chris-a-Con, or perhaps even a "rat pack show at the sands," he said. "You know, where we entertain and do a bit of vaudeville."

It appears that Pine's retro fashion in Wonder Woman 1984 is on its way to rival Evans' infamous cable knit sweater in Knives Out, too. "I am crediting you with bringing back the fanny pack," Horowitz told the actor.

The "Chriscourse" comes after Pratt jokingly declared victory as the best Chris this week. In an Instagram Story on Monday, the Parks and Recreation actor discussed beating Evans and Hemsworth in a celebrity charity fantasy football league and said, "I guess we can finally put an end to that debate, 'Who's the better Chris?'" He then added, "It's one of them. I do have them in body fat content, though. So, I am more buoyant."

Another significant, often-excluded contender in the Hollywood Chris debate is Chris Messina, who has amassed his own cult following when it comes to discussions about the best Chris. And, yes, Messina is well aware of the debate, too, as evidenced in his October profile for New York Magazine's The Cut. "Yes," the Birds of Prey actor said when asked if he knew about the ongoing discussion about which Hollywoodwood Chris is the best. "And I think there's only really one Chris. And that's Christopher Walken." The debate has officially been settled.

More like this
Alan Rickman's Diary Reveals Why He Considered Leaving 'Harry Potter'
By Darshita Goyal
Kate Middleton's Kids Had A Brutal Reaction To Old Snaps Of Her & Prince William
By El Hunt
Lin-Manuel Miranda & Tituss Burgess React To 'Little Mermaid' Casting Backlash
By Radhika Menon
‘RHOSLC’ Star Jen Shah’s Arrest & Legal Drama, Explained
By Brad Witter and Jake Viswanath
Get Even More From Bustle — Sign Up For The Newsletter