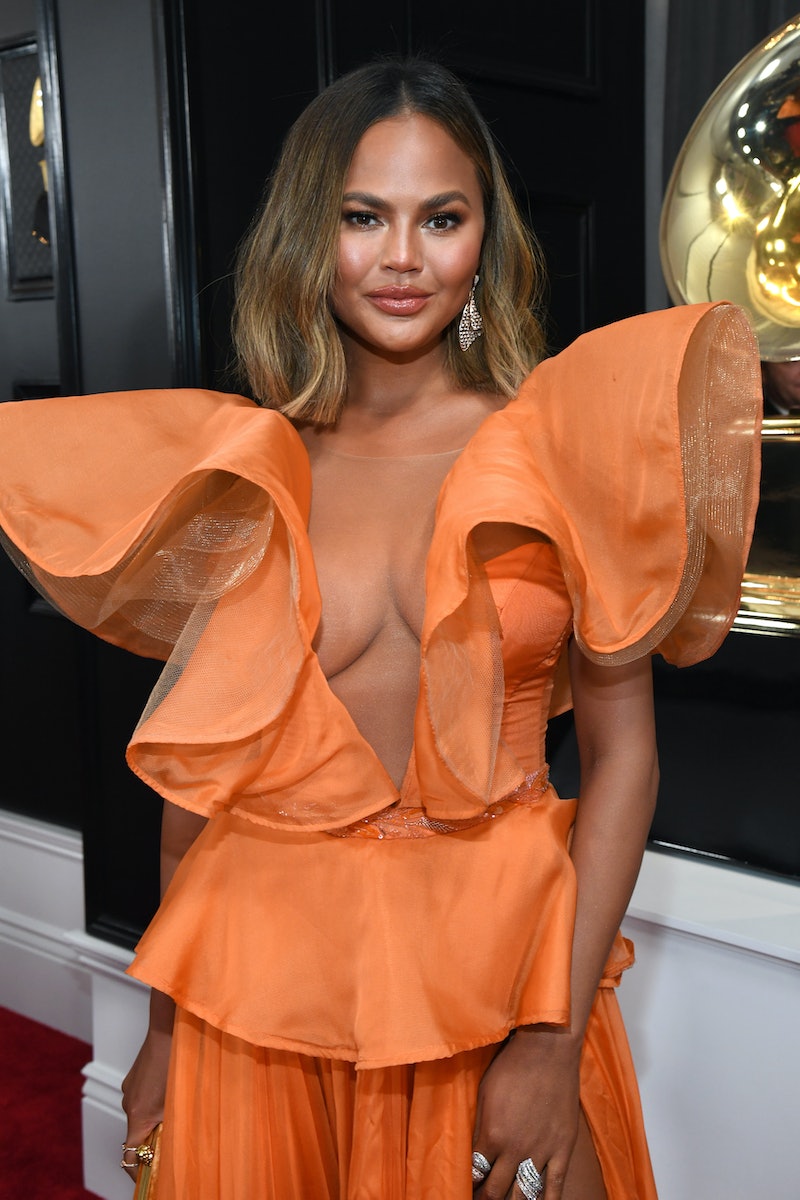 Chrissy Teigen is on vacation with her family in St. Barts right now, and based on her Instagram, she seems to be having a great time. The model uploaded an Instagram video of herself singing and dancing on a yacht on Dec. 29, and it turns out she has a lot to celebrate. In response to one of her followers in the comments, the Cravings cookbook author revealed that she's "4 weeks sober." A day later, Teigen took to the social media platform again to reveal more details about her sobriety.

It all started on Tuesday when a fan commented on a peppy post of the star shaking her hips while singing Judy Garland and Mickey Rooney's 1939 classic, "Good morning." "I need whatever drugs you're on!!" the person wrote. And after replying that she's been sober for a month already, fans rallied behind her in support. "Tell em sis," one person commented. "I'm so happy for Chrissy and her sobriety!" someone else added.

Others took to the comment section to reveal their own journeys with sobriety. "I just got sober as well!" one person said before congratulating Teigen on her progress. "Wonderful!!! 6 days shy of 24 yrs clean for me," another wrote. One fan recently became sober and is now looking to Teigen as inspiration. "I'm doing that too!" they wrote. "Week 1. I hope to turn out like a glowing and fun supermodel!"

On Wednesday, Teigen took to her Instagram stories to provide more details about her own personal journey. "One month ago, on my birthday, I got this book from my doctor and friend," she wrote alongside a photo of Holly Whitaker's self-help book Quit Like a Woman: The Radical Choice to Not Drink in a Culture Obsessed with Alcohol. "I was done with making an ass of myself in front of people (I'm still embarrassed), tired of day drinking and feeling like sh*t by 6, not being able to sleep."

The Lip Sync Battle co-host added that she's been sober ever since picking up the book, and she recommended it to her followers, regardless of whether or they're not planning to give up alcohol themselves. And when Whitaker saw Teigen's endorsement, she reposted her message along with some words of her own. "Thank you a thousand times over for sharing your humanity and multitudes, always," the author wrote. "infinite gratitude for you sharing my work. With you, with you, with you."

The 35-year-old mother to Luna, 4, and Miles, 2, has been open about her alcohol use in the past. In a 2017 interview with Cosmopolitan, she said she was "point blank, just drinking too much." "I got used to being in hair and makeup and having a glass of wine," she told the magazine. "Then that glass of wine would carry over into me having one before the awards show. And then a bunch at the awards show. And then I felt bad for making kind of an ass of myself to people that I really respected."

In that same interview, Teigen went on to explain that she's the kind of person who "can't just have one drink," and that alcohol use runs in her family. "Nobody really brought it up to me," she said, adding that people thought she was OK because she didn't appear to be sick the next day. "I knew in my heart it wasn't right," she continued. "It makes you very short with people. People think it's cutesy and fun to go on these boozy brunches, but there's more to it."

Teigen opened up about getting sober again in 2019 after attending the Vanity Fair Oscars afterparty and drinking too much. "Oh my god I feel like absolute sh*t," she tweeted the next morning. "I hereby go sober for at least the week. booze is poison." And while it remains unclear whether or not she plans on giving up alcohol long-term, we know that she's not opposed to it. "I used to think it was kind of nutty to have to go totally sober," she told Cosmo, "but now I get it. I don't want to be that person. ... I have to fix myself."

In addition to getting sober for herself, Teigen said earlier in the interview that she felt shame being intoxicated around people she admired and cared about. "That feeling, there's just nothing like that," she said. "You feel horrible. It's not a good look for me, for John [Legend], for anybody."

More like this
Rachel Zegler Reveals She Had Breast Cancer Scare
By Radhika Menon
Shonda Rhimes' Net Worth Makes Her One Of The Wealthiest People In TV History
By Hugh McIntyre
Devon Diep From 'Bling Empire' Wrote A Song About Her “Second Chance At Love”
By Grace Wehniainen
Everything To Know About Taylor Swift’s 10th Studio Album, 'Midnights'
By Grace Wehniainen and Jake Viswanath
Get Even More From Bustle — Sign Up For The Newsletter

This article was originally published on Dec. 29, 2020