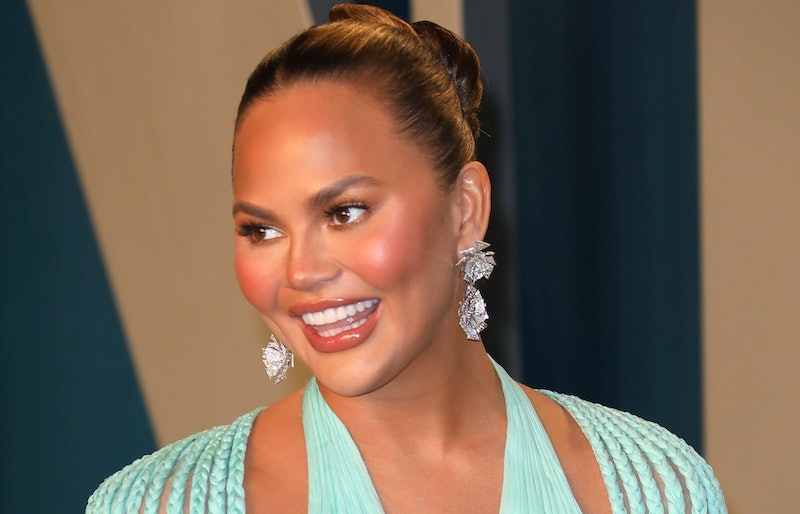 Chrissy Teigen is so ready for Halloween, and to prove it, she made her nurse dress like a plague doctor. The Cravings cookbook author shared a snapshot of the medieval costume on Twitter on Friday, Oct. 30, which showed the nurse decked out in a brown cloak, gloves, a hood, and yes, a plague doctor's signature beak-like mask.

"It's Halloween here at the legend household," Teigen tweeted alongside a photo of herself getting her vitals checked. "Made my nurse be a medieval plague doctor (I have a nurse for a bit yes lol)." In another post Chrissy shared, her mom was dressed in a 1960s-era hippie outfit while proudly holding up a peace sign. Teigen, for her part, posted a video of herself in a white feather headpiece that evokes big Black Swan energy, the 2010 thriller drama that stars Natalie Portman as an impassioned ballerina.

The costume show and tell comes after Teigen's return to social media following the loss of her and Legend's son Jack last month. The model penned a poignant essay for Medium earlier this week, recounting the pain she experienced and thanking family, friends, and fans for their kind messages of support. "Notes have flooded in and have each been read with our own teary eyes," she wrote. "Social media messages from strangers have consumed my days, most starting with, 'you probably won't read this, but…'. I can assure you, I did."

In her essay, Teigen also addressed the criticism over the black-and-white Instagram snapshots she shared from the hospital. "I cannot express how little I care that you hate the photos. How little I care that it's something you wouldn't have done," she added. "I lived it, I chose to do it, and more than anything, these photos aren't for anyone but the people who have lived this or are curious enough to wonder what something like this is like. These photos are only for the people who need them."

Teigen further explained that she penned the essay because she "needed to say something before she could move on from this and return back to life." In the final paragraph, she opened up about the lasting impact Jack has made on their family: "Jack will always be loved, explained to our kids as existing in the wind and trees and the butterflies they see. Thank you so much to every single person who has had us in their thoughts or gone as far as to send us your love and stories. We are so incredibly lucky."

More like this
The Weeknd Is Turning 2020’s ‘After Hours’ Into A Nightmarish Haunted House
By Radhika Menon
Amanda Seyfried Says She Felt Pressured To Shoot Nude Scenes At 19 Years Old
By Jake Viswanath
Everything To Know About 'RHONJ' Season 13
By Brad Witter and Jake Viswanath
Lauv Is No Stranger To Taylor Swift, Drake, Ed Sheeran, & Fame
By Alyssa Lapid
Get Even More From Bustle — Sign Up For The Newsletter