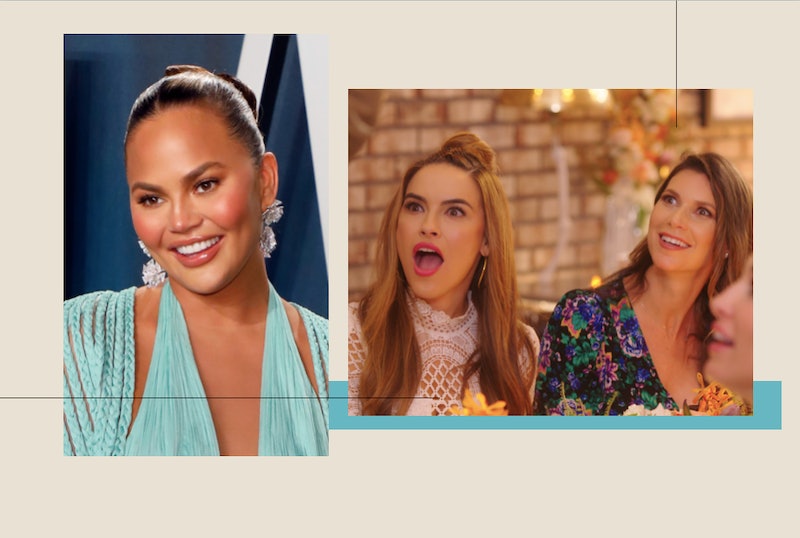 Chrissy Teigen's love for reality TV is well-documented, especially when it comes to the Real Housewives and anything Bravo-related. So when everyone starting marathon-watching Netflix's Selling Sunset during quarantine, fans patiently waited for Teigen's take on the reality hit, and she did not disappoint. Chrissy Teigen's Selling Sunset tweets are raising major questions — mainly about how much the Oppenheim Group agents on the show are actually known in the competitive world of Los Angeles real estate.

On Tuesday, Aug. 18, Teigen told her loyal Twitter followers that she finally watched Selling Sunset after seeing viewers tweet endlessly about it, and admitted that she had no clue who any of the agents were, despite living in Los Angeles and having a tendency to look at real estate online. "I look at LA real estate a lot and have never seen any of these people lol," she wrote, adding that she "obsessively asked" her own agents about the stars of the show, and they didn't know them either.

However, Teigen had a pretty positive impression of the agents regardless, saying that she didn't think many of them were as mean or ruthless as some viewers believe. "I don’t even think anyone on it is as mean or insane as you guys said?," she wrote. "Maybe I’m just so used to it because I live here? This is pretty normal lol some are actually really nice." She went on to explain that she understands reality stars play up their own persona for the cameras, hence why she doesn't think they're vicious. "Maybe I also know everyone on tv plays up a character," she said. "You guys are ... super mad at people who are in on the joke."

This might be considered a blow to the Oppenheim Group agents, but at least one of them is taking Teigen's mention in stride. Selling Sunset star Chrishell Stause responded to Teigen's tweets, and she was just really thankful that the model and author even watched the show. "Ahhhh my [queen] @chrissyteigen watched #SellingSunset," she wrote, before slipping in a sly ad for one of her upcoming listings. "Also, I have an AMAZING 2m listing hitting the market Monday in Studio City if you want to see it!" She knows a good promo opportunity when she sees one.

Teigen even responded to Chrishell, explaining that she just bought a new house last week thanks to her "growing fam" as she's now pregnant with her and husband John Legend's third child. However, she did joke that "maybe the baby can stay" at her new listing, and honestly, that sounds like an ideal situation for me. And Chrishell agreed, jokingly responding, "It's perfect for the baby to have their own space."