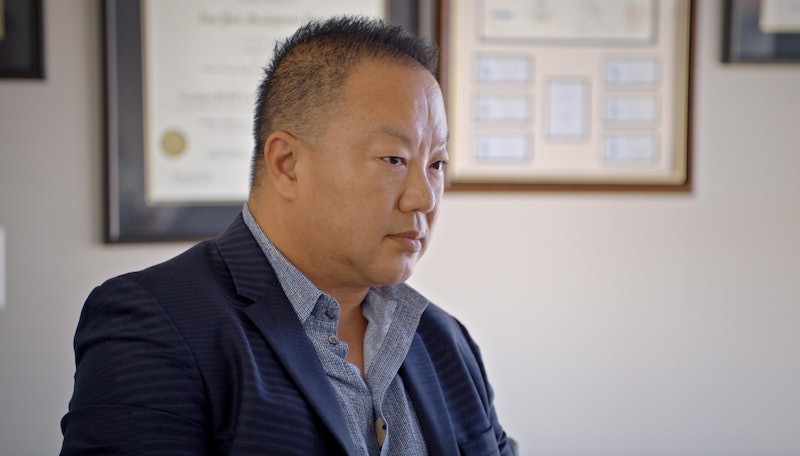 Christine may be gunning to be Bling Empire 's Queen Bee, but thanks to her husband, Dr. Gabriel Chiu, she's already fairly close to being actual royalty. According to Christine, Gabriel is the 24th direct descendant of the Song Dynasty, and if Chinese dynasties still existed today, both he and their son, Gabriel III (aka "Baby G"), would be next in line for the throne.

But don't jump to any conclusions; that didn't play a factor in Christine's attraction to him. "People often think that I married into wealth — which is not the case. I come from a financially sound background," she recently told OprahMag.com. "Dr. Chiu was my very first employee. We've been partners ever since. My husband and I were taught to really work hard — not necessarily for the dollar, but for personal satisfaction. To wake up every day and be proud of accomplishing something."

Here's everything else you need to know about Dr. Chiu.

A 1996 graduate of California's College of Osteopathic Medicine of the Pacific-Western University of Health Sciences, Gabriel is a board-certified plastic surgeon at Beverly Hills Plastic Surgery, Inc. (BHPS), which Christine says she founded. Their most popular procedures include breast augmentation, liposuction, and rhinoplasty, and Gabriel counts "numerous celebrities" among his clients. The Spa at BHPS, Inc. also has an online shopping component where clients can purchase various services and products.

Gabriel, who earned his undergraduate degree in Microbiology and Immunology, from UC Berkeley in 1989, has also performed plastic and reconstructive surgery at various medical centers and clinics in the Philadelphia area.

Though there are plenty of adorable family photos on Gabriel's Instagram page, it's mostly filled with before and after shots of his plastic surgery. In the posts that aren't devoted to his business and work, the Chius' lavish lifestyle is almost always front and center. One of the family's 2020 holiday photos, for example, included two live llamas in their home, and on Thanksgiving, Christine served the turkey while decked out in a high-fashion Dolce & Gabanna creation. Among Gabriel's famous followers are Real Housewives alums Brandi Glanville and Gretchen Rossi.

The Hollywood Reporter described Christine and Gabriel as noted supporters of charitable endeavors in health, human services and the arts, from Children Mending Hearts to The Music Center and Ghetto Film School. Christine also says that she and Gabriel invest "50% of every net dollar that comes into Beverly Hills Plastic Surgery" back into the community.

In January 2019, the couple also teamed with Prince Charles to debut The Prince's Foundation Chiu Integrated Health Programme in Scotland. Situated on the 18th century estate of Dumfries House, the center provides holistic services to the surrounding community, addressing health and wellness issues such as obesity, depression, women’s health issues and isolation of the elderly.

"When Prince Charles invited us to become involved with his vision at Dumfries House, it was a very compelling opportunity to not only help the community, but to see how much good could be done with the full arsenal of traditional, holistic, herbal, homeopathic, and naturopathic medicines and therapies," Gabriel told THR at the time.