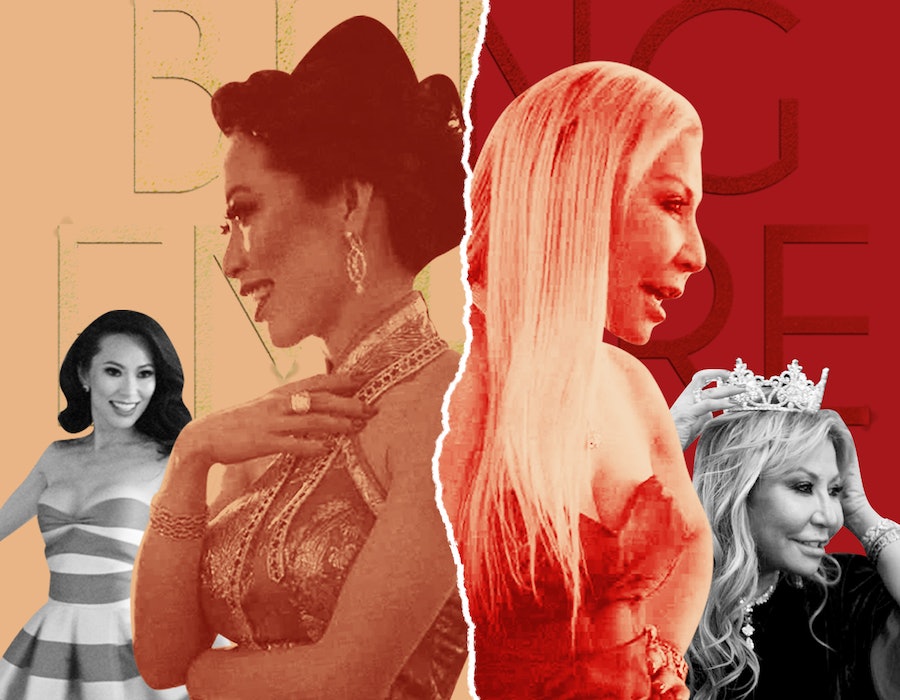 Between penis pumps, drink-throwing, and a love triangle featuring the Red Power Ranger, there is a lot of petty drama on Netflix’s Bling Empire. But there is none better than the ongoing battle between über rich arms heiress Anna Shay and couture-obsessed philanthropist Christine Chiu as they engage in a season-long power struggle.

It’s mostly Christine who feels threatened, since she’s the one with the most to prove. You don’t name drop designers like she does unless you feel like you have a reason to (we get it babe, you’re rich!). The feud itself starts out pretty one-sided, and Anna plays along because she thinks messing with Christine is fun. I would do the same thing if I lived rent free in someone’s head like that! But Anna does not tolerate disrespect, so the second Christine throws the first hypothetical punch (she’d never deign to ruin a perfect manicure), it’s game on.

Christine and Anna are clearly bickering for two different reasons. Christine wants to be the top dog in their friend group and Anna is merely responding to her. That already gives Anna an advantage, but we’re putting it to the test: who’s the real head b*tch in charge on Bling Empire? As their costar Kane Lim so eloquently put it, there can’t be two queens. Let’s tally up who won each individual fight and see who came out on top.

Kane said it best: “Anyone’s family that makes weapons and tanks, you don’t wanna mess with them.” But Christine tries anyway. It’s clear that she’s threatened by Anna, so she decides to assert her dominance by wearing a Louis Vuitton necklace that Anna also has to Anna’s own dinner party. This could have been perceived as benign if Christine didn’t make such an effort to flaunt the necklace in Anna’s face (which she later says was an attempt to flatter Anna… sure Jan!).

For Anna, it’s not about the necklace per se but the principle of using it to make a statement. To teach Christine a lesson, Anna seats her at the opposite end of the dinner table from the rest of their friends, ensuring that Christine — and everyone else — knows her place. Whereas Christine’s move was pretty tacky, Anna’s is a true power play. Subtlety is key in social warfare, darling!

Christine Invites Anna Over to Talk About the Dinner

The passive aggression in this scene… whew! Following necklacegate, Christine is looking for a fight. She invites Anna over to “clear the air,” but really to chew her out about the seating incident. Anna, however, does not give her the satisfaction of admitting that it was a purposeful diss. Instead, Anna deflects and says she put Christine there to keep her best friend company. Christine is visibly frustrated that she isn’t getting the answer she wants and Anna is just sitting there, smirking. Once again, Anna is the queen of maintaining civility while quietly bruising Christine’s ego. Nothing says HBIC like sabotage with a smile.

In a move that is both delightful and conniving as hell, Anna invites Christine over under the pretense of cocktails. Instead, she arrives to find Anna, her best friend Florent, Kane, and a buff instructor engaged in a yoga session. Christine is overdressed and surprised, but she takes it in stride and joins them. She’s thrown for another loop when the yoga instructor strips off his shirt and starts gyrating toward her. Clearly uncomfortable, Christine initially squirms, giving Anna the upper hand. But Christine quickly composes herself and starts to play along, saving a bit of face by showing that she can take anything Anna dishes out.

It’s one thing to be fashionably late. It’s quite another to arrive at a party when everyone is leaving, which is what Christine does during Florent’s birthday party. This is, of course, not Christine’s fault, since Anna deliberately put the wrong time on her invitation. When Christine arrives, her friends tease her for coming at the end of the party, much to her confusion. Christine tells Anna that she was just following the timing she was given, and Anna simply smiles and says “mhmm.” I long for the day upon which I can shut someone down with barely more than a grunt. Everyone else is too preoccupied with their goodbyes to realize what happened, so Christine just leaves, looking ridiculous. As she laments in her talking head segment, the joke is on her again.

If we only consider their direct confrontations and nothing else, Anna just barely edges out Christine as the HBIC of Bling Empire. But there is so much more that makes Anna the irrefutable holder of the title: her affinity for sledgehammers, the over-the-top parties she throws for her friends, and the sheer fact that she uttered the line, “There ain’t no dick that good.” Sorry, Christine, but there is simply no competition. Long live the queen!